Yes, I know, The Horn Section already saluted the great Nina Mae McKinney a couple of years back.  But Wednesday, June 13th would have been Ms. McKinney's 100th birthday, so I think we ought to recognize. 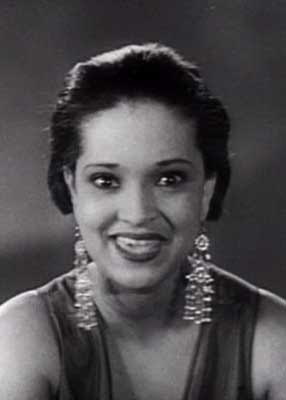 The YouTube link in the prior post featured Ms. McKinney's fabulous vocal from "Pie, Pie, Blackbird" (1932).   SAFE IN HELL (1931) features more singing from lovely Nina Mae, who sings Clarence Muse's "Sleepy Time Down South" in that pre-Code classic.  Nina Mae sang in most of her 1930's films, and it was always a highlight:

YouTube has more Nina Mae McKinney treasures, including her full-length 1939 feature THE DEVIL'S DAUGHTER, which was filmed in Jamaica and co-starred Ida James:


If you enjoyed the clip of McKinney's rendition of "Everything I've Got Belongs to You" in my first Salute to Nina, here's the musical short PIE, PIE, BLACKBIRD (1932) in its entirety.  Nina Mae and the young Nicholas Brothers are joined by the Eubie Blake Orchestra for 11 amazing minutes:


And, finally, with the backing of Curtis Moseby's legendary Blue Blowers, here's Nina Mae at age 17 in her debut film, HALLELUJAH (1929):

Nina Mae McKinney passed away in 1967, but a hundred years after her birth, her legend is still growing.  Stephen Bourne (author of the excellent Butterfly McQueen Remembered) wrote the recently released Black  Garbo, an equally informative book about Ms. McKinney's career and the obstacles she faced as a charismatic African-American star in a far less enlightened era.  Both books are highly recommended by yours truly.

A gorgeous actress and singer - thanks for posting.