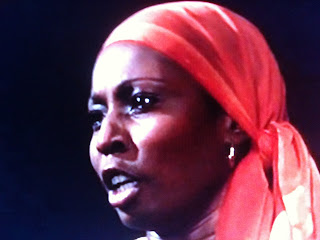 
Mosley is the titular blues legend, whose life is covered from the time he departs the family farm (one step ahead of the law) to his 'discovery' by musicologist Brodhead (as John A. Lomax) in prison a quarter century later.  After bidding adieu to his parents (Benjamin and Hamilton) he finds a Shreveport benefactor in Madam Sinclair, who connects him with his first gigs.  But Mosley isn't one to be a kept man.  He leaves her and the red light district behind, drifting between Louisiana and Texas, incarceration and freedom during the segregated Roaring Twenties with defiance, turbulence and music as the constants in his life.

Gordon Parks Sr. comes full circle with his final feature, LEADBELLY.  In bringing Hudie Ledbetter's life to the screen, the director returned to the same time period he explored in his landmark debut, THE LEARNING TREE.  While TREE was set in Kansas, LEADBELLY takes place in the South, and the guitar virtuoso confronts bigoted hostility in a two fisted style reminiscent of TREE's Marcus for much of the film.  Racist whites aren't the only ones to run afoul of Mosley's hot temper.  The high strung talent is willing to fight anyone over women, pride and music.  Especially music---his introduction to Evans (as Blind Lemon Jefferson) is a near knife-fight after Evans trash talks Mosley's playing on a passenger train. Yes, he was that close to a violent confrontation with a blind man.  But seconds after he's poised to strike over an insult, he's laughing and forming a musical partnership with his would-be opponent.  He may have a fiercely competitive nature, but Mosley repeatedly shows a healthy respect for his fellow musicians and impetuousness towards virtually everyone else. 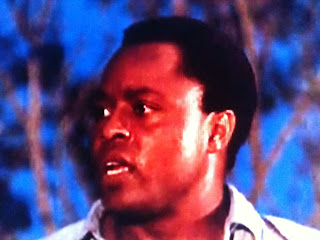 WALK HARD: THE DEWEY COX STORY mercilessly skewered every time-honored cliche in the music biopic formula.  Thirty years earlier, Parks painstakingly avoided almost all of them.  There's no substance addiction for Mosley to overcome: those in the audience drink more than he does.  Mosley doesn't leave home over parental rejection of his music: Benjamin sends him away to keep him out of jail, and later tries to ensure that the junior Ledbetter will always have his favored guitar.  A tearful reconciliation with his family near the end?  Nope.  The aged Benjamin locates Mosley's prison, but leaves without seeing him once he learns it isn't possible to buy his son's freedom. 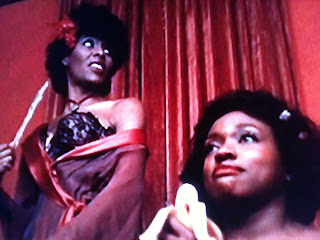 Parks eschews commercialized revisionism as decisively as the genre's conventions, so forget about finding the progressive white character who assists the protagonist.   Mosley's Leadbelly encounters bigotry of some form from every Caucasian he meets.  The only "friendly" white face is that of governor Faulk, and only outwardly so---his obnoxiousness and ignorance recalls Warren Oates' character in the same year's DRUM.  Faulk allows Mosley to sing his way to freedom, thoroughly humiliating him in the process.  This is the subtlest racism Mosley encounters.  The rest is blunter and more often than not reinforced by shotgun.  The Lomaxes?  They're merely stone-faced song collectors on a mission. 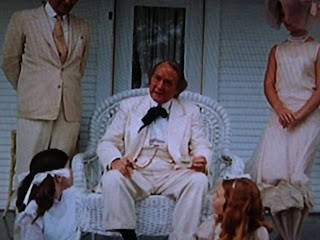 The titular character's nomadic ways are interrupted only by legal trouble so covering his life requires LEADBELLY's episodic nature.  As a result, this is Mosley's show all the way.  He solidly essays Ledbetter's egotism, antagonism, and (after aging a bit) pragmatism in often demeaning situations.  This is easily Mosley's best opportunity to carry a feature film, but he doesn't carry the tunes: his singing was dubbed by Hi Tide Harris.  Sinclair, Benjamin and Evans have the most prominent supporting roles, yet all have less than ten minutes of screen time. 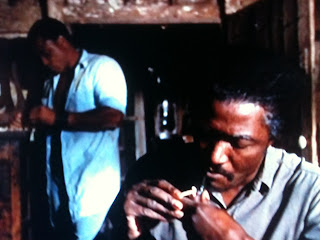 Parks' opportunity to direct came after a groundbreaking thirty year career in photojournalism.  He was 57 when he brought his novel THE LEARNING TREE to the screen, 59 when SHAFT became his biggest commercial success.  LEADBELLY was clearly a labor of love by its talented maker.  Reportedly, his disappointment over Paramount's failure to promote it was a factor in Parks' disinclination to make another big screen project.  It's a real shame it isn't better known. In its own way, LEADBELLY is as rewarding as his better known works.  Executive produced by David Frost.  Yep, that David Frost.


No earthly idea from me.  Poor studio support was the major factor in the film's under-performance in 1976.  Continuing interest in both Leadbelly and Parks would seem to ensure sales for a legitimate DVD as bootlegs have been plentiful in recent years.

Gordon Parks Sr. made precious few films, and THE LEARNING TREE (preserved by the National Film Registry in 1989) and SHAFT are undisputed classics.  LEADBELLY is his lone effort that is still missing from DVD, an oversight that needs to be corrected.

The extras alone would make a release more than worthwhile.  A commentary with Mosley would be particularly interesting.

And now, one purely gratuitous reason.  This is the most revealing outfit that Horn Section favorite Madge Sinclair ever wore onscreen.  You'll never see more of her than you do in this film:


LEADBELLY is currently available for viewing at Netflix Instant.

It's now available on Netflix.

This should be available for home entertainment!