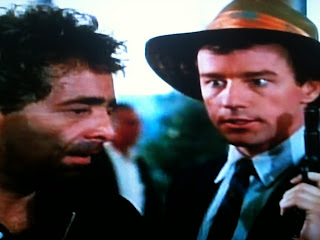 
The host and creator of TV's highly successful GONG SHOW, Barris is on top of the game show universe.  He seems to have it all, but there's a down side: constant battles with the network via Douglas (sort of a kinder, gentler version of PRIVATE PARTS'  "Pig Vomit"), high-stress tapings of five shows at a time and virtually non-stop unsolicited public auditions.  Eventually wife Altman gets fed up and walks out, adding to his cumulative stress. It's enough to make a man want to get away from it all, and Barris does---via a one way ticket to Morocco and the world's biggest desert.

1980 brought not one, but two variations on Fellini's 8 1/2, with Barris' far less cinematic GONG SHOW MOVIE beating Woody Allen's STARDUST MEMORIES to theatres by four months.  Legendary game show producer Barris was directing a film for the first (and only) time, but ceded little control in bringing his most famous creation to the big screen.  In addition to appearing in every scene, Barris cast real life wife Altman (her only imdb credit), executive produced, co-scripted (with PUTNEY SWOPE auteur Robert Downey Sr.) and composed the soundtrack for THE GONG SHOW MOVIE.

Okay, for his MOVIE, Chuckie Baby wore almost as many hats behind the camera as he did in front of it, but this isn't the ego trip that many detractors claimed.  Over the course of ninety minutes Barris is insulted numerous times, misidentified, physically assaulted and even literally pissed on.  He doles the biggest laughs out to his supporting cast (the best sight gag: The Unknown Comic's bedroom).  The TV magnate cheekily kept his GONG SHOW unpolished and unprofessional, and it appears Barris' intent was to preserve those same qualities for the feature version, not to stake some claim to filmmaking genius.  Wife Altman and daughter Della are both just as uncomfortable in front of the camera as the man himself.

This is not to say that being purposely slapdash makes THE GONG SHOW MOVIE some kind of lost subversive classic--just that it doesn't entirely deserve the outright savaging reviewers gave it.  Certainly it was gonged for the wrong reason.  My best guess is that the original idea was Barris and Downey teaming up to satirize the high-pressure showbiz world of films like ALL THAT JAZZ (as Barris' TV productions had done to various game show subgenres).  However, the man without the filmmaking experience had (or took) total creative control, and the result seems more like one long montage periodically interrupted by a few minutes of plot.  Kind of like ROCKY IV, only far less pretentious.

Speaking of the frequent montages: not the collection of the show's greatest hits that you might anticipate.  Instead, you get the greatest misses---the acts that were then too raunchy for prime time, almost all including nudity or profanity.  The editing of the bits also should have been much better.  For example, the infamous Popsicle Twins (reportedly missed by the entire West Coast the first time) get less than ten seconds while other less notable (and G-rated) acts make it to the gonging.  A better mixture might have made the videotaped Show footage more accessible for the uninitiated, but it is still fun spotting familiar faces like Kitten Natividad, Taylor Negron, Tony Randall and Vincent Schiavelli.  And if you're wondering if you'll finally see Jaye P. Morgan's boobs: you do, and while they are real, I'll stop short of the other half of the famous SEINFELD quote. 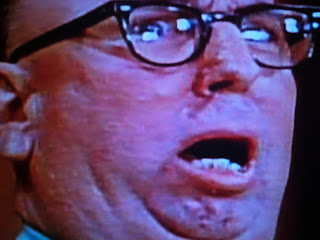 Universal never allowed Andy Kaufman to realize his dream of bringing THE TONY CLIFTON STORY to the big screen at the peak of his popularity, but they spent $6 million bankrolling Chuck Barris two years past his.  Go figure.  Oh well, Barris courted audience rejection almost as brazenly as Kaufman, and while GONG SHOW MOVIE couldn't match the legendary Clifton screenplay in sheer surrealism, it did have its mind-bending moments.  Not to mention more solid laughs than you'd expect underneath the wreckage.  In its own way, THE GONG SHOW MOVIE defies criticism: made exclusively for fans of Barris and the show and more likely to bewilder newcomers than convert them.  And really, critics, come on. "Worst Movie of All Time?"  Hell, it wasn't even the worst movie released during that month (May 1980) IMO: that honor has to go to G.O.R.P.*.

As noted above, GONG SHOW's moment had passed by the time this feature-length version hit the big screen.  The show had been off NBC for nearly two years, and the syndicated version was only a few months from cancellation.  Barris had created and produced several knockoffs (THE $1.98 BEAUTY SHOW, THE CHUCK BARRIS RAH RAH SHOW) in the wake of GONG SHOW's success, and all had come and already long gone.  The overexposure meant that "Barris backlash" was in full force when THE GONG SHOW MOVIE premiered in 1980, so it was every bit as timely when it was released as COOL AS ICE and guaranteed a critical savaging.  And, as mentioned a time or two, it is terribly made.

That was then, this is now.  The show that Barris (THE DATING GAME and THE NEWLYWED GAME are his other, more durable hits as producer) is still best known for has maintained its cult following for 35 years now, and even picked up new fans during the past decade with GSN airing reruns and CONFESSIONS OF A DANGEROUS MIND becoming a well-received feature courtesy of director George Clooney.   Barris, who wrote Freddy Cannon's hit "Palisades Park" in his pre-TV days, concocted the tunes himself.  They're actually kinda catchy, especially the showstopping "Don't Get Up".  Since Chuckie Baby wrote 'em all, music rights shouldn't be an issue.

Of course, it is possible that Barris himself would rather just forget about this venture.  Assuming he doesn't, this one would likely find an audience today, and a commentary with the man himself and Downey Sr. would be one a must-listen if there ever was one.  A DVD release would also be a great excuse to include a complete GONG SHOW episode or two as extras.  What gives on this one, Universal?  Inquiring dangerous minds want to know.
Posted by Hal at 7:50 PM

Yes, I also would like to know why the HELL this isn't available. I thought entertainment moguls wanted to make money to pay for their Hollywood lifestyles.

You can watch this film on Veoh, but it is complete garbage. I suggest doing anything with your time other than watching this trash.