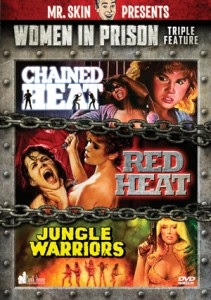 
In the case of CHAINED HEAT (1983), which was reviewed here as part of our Tamara Dobson 65th birthday Salute, you'd better hurry.  Courtesy of the one and only Mr. Skin, CHAINED HEAT is arriving on July 12th as part of a WIP Triple Feature along with RED HEAT (1985) and JUNGLE WARRIOR (1984).

It's a bit pricey at $29.98 if CHAINED HEAT is the only title you want, but there's excellent value for the money: interviews with actresses Stella Stevens and Sybil Danning (who co-starred in all three films) and the very first UNCUT release of CHAINED HEAT ever; at 98 minutes this release is three minutes longer than the theatrical release and will contain nine full minutes of footage missing from both the VHS release and the print that recently made the Showtime/TMC cable rounds a couple of years back.

Where to order this long-awaited must see?  Synapse Films has it available for pre-order now and, of course, so does Amazon.  As I stated above, you'd better hurry, as rumor has it that the rights will expire at the end of 2011, so this is truly "available for a limited time only".  Is CHAINED HEAT worth the rush, and the price?
Well, let's see: Linda Blair, John Vernon, Henry Silva, Tamara Dobson, Sybil Danning.....I could go on, but why not just read the review and decide for yourself?

CHAINED HEAT isn't the only long-awaited DVD release this month.  On July 19th, SKIDOO (1968) will be arriving via Olive Films, after years of being out of circulation.  In fact, this late 1960's Otto Preminger experiment was never released on VHS and was long-rumored to be withheld for the longest time by the late director's estate.  It isn't a success, but it isn't that big of an embarrassment either.


It's hard to describe SKIDOO in a concise manner.  So hard that it probably holds the record for The Horn Section's lengthiest review of a film.  (Yes, I'm aware I get long-winded doing the QUINCY, M.E. recaps.  But they ain't films!)  If you have a few days to kill, here's the original review, which was posted when TCM originally dusted SKIDOO off in 2008 for a run on TCM Underground.

More recently, the venerable hippie-era relic made the rounds on Showtime and Flix this Spring, and now it is available for pre-order from, where else, Amazon.

Not much I can add to the review except this, the trailer:

Enjoy!  More reviews to follow, including The Horn Section's participation in a blogathon later this month.  Happy 4th!
Posted by Hal at 9:06 AM