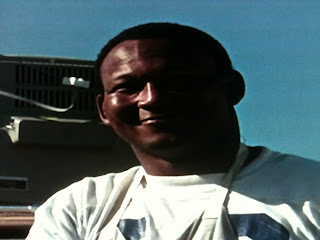 
Alda is author George Plimpton, who owes SI publisher Doyle six more magazine articles to satisfy his current contract.  With prior literary efforts chronicling his attempts at professional boxing (a knockout at the hands of Sugar Ray Robinson) and baseball (pitching to a team of All-Stars) Alda decides to try his hand at the NFL, posing as a rookie quarterback trying to make the team. 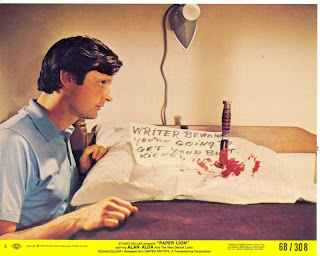 After getting several doors slammed in his face and a suggestion from Packers coach Vince Lombardi to "try the AFL", he finds a taker in the Detroit Lions.  Alda introduces himself as a Harvard alum and starter for the semi-pro Newfoundland Newfs, but the ruse lasts less than an hour:  It is quickly revealed he doesn't know how to put on his hip pads or take snaps from center.

Fully capturing the flavor of Plimpton’s classic book on film is probably impossible.  There's no painful roster cuts and even a generous (for the era) 107 minutes isn't enough time to retain the detailed portraits of lesser known players such as the late Lucien Reeberg.  Instead director Alex March keeps his focus on the opening rigors of camp, the camaraderie of the Lions in the ultimate team sport and the preparation (mental as well as physical) for not only a typical game, but an entire season.

In his first big screen lead, Alda is appealing, and oddly, at a lanky 6’2”, he looks more like a professional quarterback than many actors not playing the role for laughs (i.e. Mac Davis, Adam Sandler)---that is, before he drops back to pass.  Hutton would go on to probably the most successful acting career of any supermodel, but she’s just appealing eye candy here (her debut).  The 1967 Lions went on to a mediocre 5-7-2 record, but coach Joe Schmidt and rookie Lem Barney ended up in Canton, and Alex Karras certainly would have joined them by now if not for his gambling suspension in 1963.  Karras is the most natural of all the players in front of the camera, and acting would prove to be a perfect fit for him (BLAZING SADDLES, PORKY'S) in the years to come.

The book's climactic scrimmage was changed to a preseason game for the film’s finale, just one of many wise cinematic enhancements.  Another was March’s use of actual game footage from NFL films.  The humorous side of Alda’s quest remains on the front burner throughout.  There's no villain in this football film--not even Lucci, who looks the part.  As a result PAPER LION is both consistently amusing and educational.  It’s a time capsule look at a National Football League that was on the verge of drastic change.  Within a year, Joe Namath’s Super Bowl guarantee signaled that the AFL had gained equality with the NFL, not only making Lombardi’s dig at the junior league obsolete, but also marking the beginning of an era with more outspoken players and fewer autocratic coaches like the Packers' legend.

It wasn't just the NFL that was facing drastic changes in 1968: MPAA standards were about to change films as well.  At the time PAPER LION was released, Hollywood wasn't quite ready for a football film with the frank language of THE LONGEST YARD or the pain-killing injections shown in NORTH DALLAS FORTY.  As a result, the film dated quickly and PAPER LION ended up having its thunder stolen by more graphic depictions of the sport.

In spite of the above PAPER LION is still one of the funniest football films, and also offers probably the best cinematic look at the pre-merger NFL of the 1960's, when coaches still ruled with absolute authority, year-round conditioning was unheard of and the off-season job was still a way of life for players. 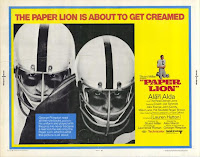 Alan Alda's first lead and the acting debut for Lauren Hutton.  Several Lions are more than credible playing themselves, including Karras, who would have a long and successful acting career after his playing days ended.  Karras' future broadcast partner Frank Gifford is also on hand (in a swingin' club!) to join Lombardi in discouraging the author.  If you don't blink early, you'll also see a young (and uncredited) Roy Scheider.

PAPER LION is currently available for streaming on Netflix Instant.
Posted by Hal at 5:42 AM

Really good review! Love the way you word things. I haven't seen this movie in a long time but I remember it. Love almost anything Alan Alda does. And I did not know the little fact about Roy Scheider. Makes me want to watch the movie again!

Thanks Jaws, and thanks for reading! This is one I like to revisit almost every Fall.