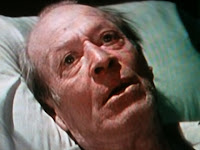 Elliott is a crooked cardsharp whose life is spared when minister Warner takes a bullet meant for the gambler.  In gratitude Elliott vows to honor Warner’s dying wish: that he not only raise the funds needed to build Warner’s church, but do it strictly “by the Good Book”.  Meanwhile female bandit Windsor is being sought by marshal Tucker and vengeful Davis with a $5,000 reward on her head.   Elliott sees the reward money as the means to his goal, but his newfound vow requires non-violent, persuasive methods of capture, a limitation her other pursuers lack. 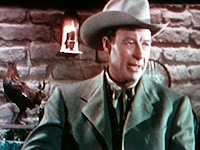 “Man by his misdeeds kindles his own hellfire”.  So begins this unusual western that combines born again Christianity with secular feminism, personified respectively by Elliott and Windsor as each tries to atone.   One of the most popular stars in the genre throughout the 1940’s, Elliott was never the most versatile actor, but his screen presence was undeniable.  He made a living playing “peaceable” men who were forced into violence; the twist in HELLFIRE being that Elliott is far from serene at the outset.  In fact, he is seen throwing the first punches before and after his awakening.  Becoming peaceable is a constant struggle for this reformed gambler. 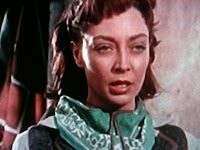 The role of outlaw Doll Brown normally would have gone to an actress already under contact to Republic (I.e. Adrian Booth or Adele Mara) but Marie Windsor was cast at Elliott’s insistence.  An expert horsewoman, she did most of her own stunts.  Windsor normally played beautiful bad girls.  In HELLFIRE she’s been pushed to the wrong side of the law in her quest to find her sister who, unbeknownst to her, is married to Tucker.   Windsor looks decidedly unfeminine at the outset, “rides alone” by choice and proves she’s the equal of any man on horseback and with a gun ( i.e. killing Davis’ brother).   Windsor finally flashes her charming side to evade the marshal when he tracks her down, and screenwriters Dorell and Stuart McGowan make the point that going straight is especially difficult is for a female outlaw.  Her attempt to reform consists of “honest” work singing and dressing suggestively in a saloon (“where else would a single woman find employment?"). 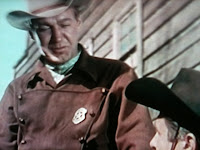 A western about an outlaw who gets religion sounds like a preachy, tiresome endeavor, but director Springsteen and the McGowans deftly evade the potential pitfalls.  Elliott is no more successful at raising donations from townspeople than Warner is, with his fundraising attempts meeting indifference and contempt in roughly equal measure for most of the film.  His reception improves, but at HELLFIRE‘s end the church remains unbuilt.  The influence of Christianity is shown to be positive (Elliott's life is definitely changed for the better) but limited.  He abandons liquor and gambling but not his gun.  Two out of three ain't bad? 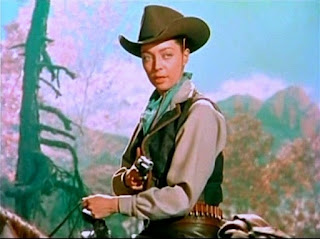 Genre stalwarts Tucker, Davis, Fix and Withers provide fine support, but this show belongs to Elliott and Windsor, and it’s easy to see why both cited HELLFIRE as a personal favorite.  According to Springsteen, Elliott told him HELLFIRE was “the best picture I’ve ever done”.   I agree, and Windsor joins him in giving a career-best performance.  In the end it‘s left up to the viewer whether Windsor‘s life was saved or just her soul. 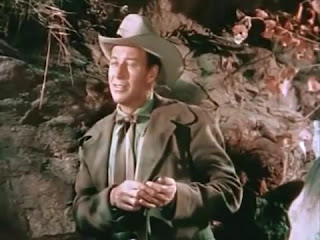 As I noted in reviewing ROCK ISLAND TRAIL and CALIFORNIA PASSAGE, Republic's westerns of the late 1940's and 1950's remain largely unreleased on DVD, despite fairly frequent showings over the past decade on Encore's Westerns Channel. 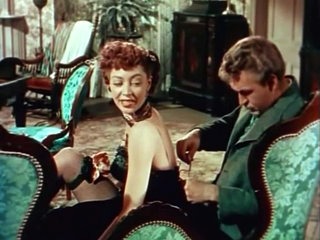 Puzzling why it isn't.  It is arguably Elliott's best remembered and most popular film with modern audiences, and one of Windsor's as well.

It may not be available on DVD yet, but this Trucolor western is now available for streaming on Netflix Instant.  Well worth watching, HELLFIRE is a true gem and arguably the most glaring DVD omission from Republic.
Posted by Hal at 9:32 PM

Been meaning to commend you on this post. If I hadn't seen the film (about a million times), I'd certainly be compelled to do so.

This remains one of my favorite Westerns and firmly establishes Marie Windsor as my favorite actress of all time.

I've always been a bit of an evangelist for this film, so thanks for helping spread the word. Folks, you need to see this one!