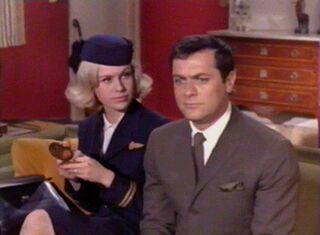 
American correspondent Tony Curtis lives in Paris with three different stewardesses (and fiancees!): one French, one British, one German (and all blonde).  Each lady is completely unaware of the other two as they work different timetables for three different airlines and Curtis deftly arranges everything to a "T" (with the help of housekeeper Ritter) to keep it that way.  Curtis has it made in the shade with his harem ("Air France" Saval, "British United" Leigh and "Lufthansa" Schmidtimer) until a couple of curveballs upset the applecart. First professional colleague Jerry Lewis learns of the arrangement and blackmails Curtis into a temporary room.  Then plans are announced to put the new, faster BC-10 into service, which will result in faster flights---and shift changes or the mile high trio. 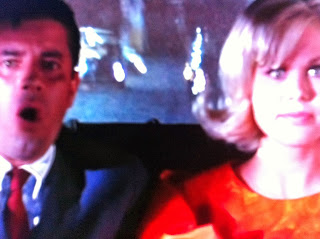 The Hollywood version of a French stage smash that flopped on Broadway, BOEING BOEING turned out to be a sexless sex comedy, less risque than your average episode of LOVE THAT BOB.  The potentially smutty setup turns out to be all talk and seperate bedrooms, a perfect illustration of why the Motion Picture Production Code was so creaky after three decades.  It's also a prime example of what second-wave feminism would be protesting within a year or two.  Objectification?  The three lead actresses have their measurements listed under their names in the opening credits and are naive enough (to put it charitably) to have nary a suspicion of Curtis' trigamy. 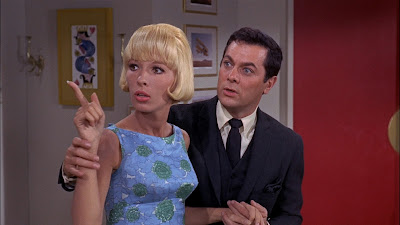 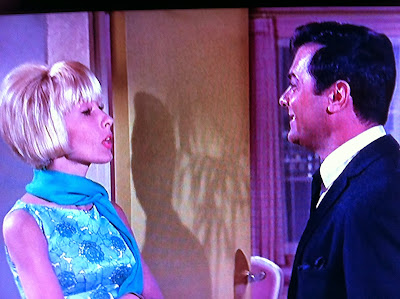 Not to say that BOEING BOEING is a complete loss.  The atypically laconic Lewis essentially plays the straight man and does a nice job, as he often did when subdued (i.e. THE KING OF COMEDY).  He's bested by the consistently harried Ritter.  Granted she could play this role in her sleep, but the six(!) time Oscar nominee is still in fine form as she weathers the confusion, quits her job continuously, gets raises, and wearily goes back to weather the constant confusion again. 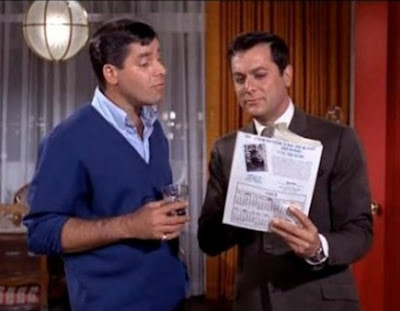 Director John Rich (ALL IN THE FAMILY) does his best to eliminate staginess, but as both an adaptation of the play and an example of mid-sixties pseudo-smut BOEING BOEING is lacking.  You'll have better luck with GUIDE FOR THE MARRIED MAN or KISS ME STUPID if you're seeking the latter.

One of those childhood favorites that sadly hasn't aged well for yours truly.  Promoted as the "In" comedy of "Nineteen Sexty-Sex", BOEING BOEING was already an artifact within a few years of its release....... 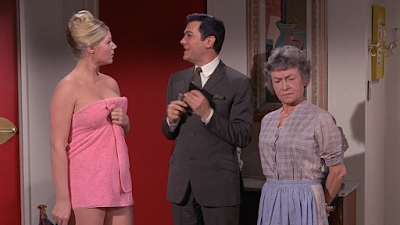 .....or was it?   The play was successfully revived for Broadway in 2008 with a touring production following, and the film has actually been remade in India in 1985 and 2005.  In the age of MAD MEN, maybe I'm off on this one. The next remake, slated for 2025 if past is prologue, might well be Hollywood's long overdue second stab at it.
Posted by Hal at 12:37 PM

Another good choice, Hal! These films need to be rescued from obscurity.

In more tragic news, my Klug Brother, I've just noticed that Netflix has suddenly canned all of their streaming episodes of "Quincy." What madness is this?!

Thanks guys! Rupert: yeah, I still enjoyed BOEING BOEING, just not as much as I did when I was a teen.

Frost: I don't know why Netflix made such a horrible decision. Clearly on a par with Napoleon's decision to invade Russia and ABC's cancellations of F TROOP....and SLEDGE HAMMER!, and POLICE SQUAD!...and THE JOB....etc. etc. I for one have emailed Netflix and urged them to bring back our favorite Klug Man ASAP!