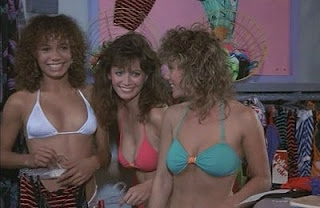 Recent college graduate Wright has decided it’s hip to be square, with a social-climbing marriage and cushy job all lined up for him by future father in law Robinson. Before he can say “I Do”, news of his Aunt’s passing takes him to Malibu, home of slacker brother Greenwood and the bikini shop Wright just inherited. With his prudish fiancee Blee wanting nothing to do with the West Coast, Wright instructs Nelson to help find a buyer, while Greenwood sees an opportunity to run his dream business. Horan takes an immediate shine to the reserved newcomer, so guess who eventually wins the struggle for Wright’s soul? You’re right---and it doesn't sit well with the jilted Blee or her powerful father.


The “raunchy teen comedy" cycle was a good three years past its peak when MALIBU BIKINI SHOP had its limited theatrical run in the fall of 1986. This slight film follows the genre’s conventions: liberation of the repressed (not humorless Blee, surprisingly), plenty of shapely females in (and out of) bikinis and the usual surfeit of sexist humor.  For example, Greenwood‘s use of unreliable clothing stitches and a two way dressing room mirror.  And of course, the slobs beat the snobs in the end. As was the case from the earliest genre entries like H.O.T.S. and THE SENIORS, old pros like Robinson, Goldenberg and Nelson are on hand to provide the best laughs.  Matter of fact, the funniest thing in the film is probably Nelson’s toupee (with Robinson's combover a close second).


There’s literally a hundred like BIKINI SHOP but it will satisfy your craving for old school late night R-rated comedy. It certainly holds it own in the eye candy department (for guys, anyway); Jakowpck, Julius and especially Gorg all look stunning doing dance routines in their swimwear. Hairstyles and songs are solidly of the era, and director-writer Wechter provides a catchy soundtrack despite a lack of "name" artists.  In particular, the cover of Girls of Rock and Roll and Diana DeWitt‘s You Make Me Nervous (which is way too close to Pat Benatar for comfort, especially with that title) stick in your head longer than anything else in the film will.  This was obviously considered to be a potential single, complete with rotation ready video featuring Gorg (whose first role was in ZZ Top's Sharp Dressed Man video) in a camouflage bikini.

The key difference between this and a PORKY'S?  The sexual embarrassment here is all on one gender.  Bikinis are designed by Greenwood to disssolve on contact with water, and everyone laughs, with nary a lady objecting to this entirely planned wardrobe malfunction (or to Greenwood's aforementioned mirror).  When Blee's dress is ripped in two by skateboarders while she's wearing it, her father's only concern is the cost of the dress!  The lack of equality and memorable intentional laughs means that there’s better examples of the genre and better 80's period pieces, but there‘s also far worse: GIMME AN “F“, anyone?

You had to be there--and a guy.  If you were, and you are, you would probably welcome the release of MALIBU BIKINI SHOP on DVD. 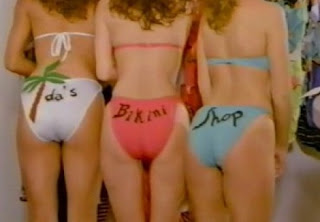 As a film, largely unremarkable and came too late in the T&A cycle to be as well-remembered as a H.O.T.S., PRIVATE LESSONS or SPRING BREAK. While those films reached a wide audience on late night HBO and Skinemax in the early 1980’s, MALIBU BIKINI SHOP was most often aired edited on USA’s UP ALL NIGHT late in the decade.  Also, the humor in this one is solely for the guys; Hell, even H.O.T.S. had a jockstrap raid. 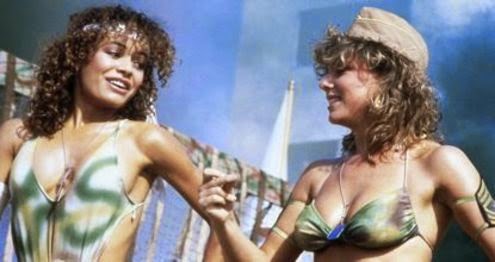 Okay, so it doesn’t have the future superstars a la Tom Cruise in LOSIN’ IT, Johnny Depp in PRIVATE RESORT or Dennis Quaid in the aforementioned SENIORS. BIKINI SHOP still boasts a rather eclectic cast. Beautiful Galyn Gorg would later appear on practically every cult sci-fi series for the next 20 years. April 1981 Playboy centerfold Jenrette (the ill-fated Aunt Ida) wrote a best seller about her married life with a congressman.  Buxom Blee (HOT DOG THE MOVIE) plays against type as Wright's shrill fiancee.  And the late great Frank Nelson was saying “Yeessss!” to his final film; he passed away the same month BIKINI SHOP was released. 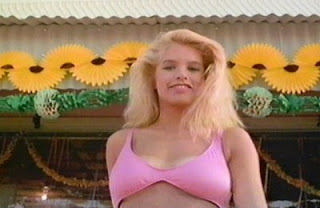 In addition to being your last chance to see Nelson, it’s your only chance to see Christie Jakowpck (at left).  MGM owns the rights, and after a long cable absence BIKINI SHOP (as retitled) has been making the rounds on Showtime recently.   They just don't make 'em like this any more.