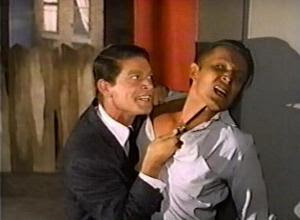 
Stephen Boyd is a barker at a gentleman's club, St. John is his stripping girlfriend, Bennett his best friend/lackey and St. John's ex.  At the outset, at least. After getting stiffed for performance fees and arrested, Boyd's "Frankie Fane"(!) decides they should hitchhike to New York City where he plans to put his talent to use.  While said talent is never apparent to the viewer, he becomes a successful actor once he privately auditions for Parker.  Boyd eventually ends up in Hollywood when honest, scrupulous agent Berle decides to represent him on Parker's recommendation.  A user, womanizer and borderline psychotic offscreen, Boyd moves from St. John to Sommer and experiences a meteoric rise.  His fall is harsh, though, and just when he's about to submit to the ultimate indignity for a "big star"--a television series(!)--he gets word from ever-loyal Bennett that he's about to be nominated for an Oscar.  Seeing the opportunity to get back on top of the "glass mountain", Boyd decides to stack the odds in his favor. 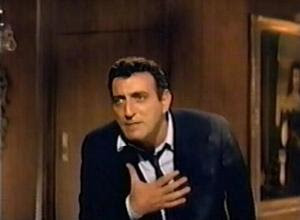 Oh, Lord.  THE OSCAR is one of Hollywood's most notorious messterpieces, as beloved by bad movie buffs as the following year's VALLEY OF THE DOLLS or any of the countless all-star "disaster films" of the 1970's.  The notoriously inept screenplay is famed for jumping from one implausible situation to another and for the strained attempts at hip dialogue and hard hitting narration.  Creating your own lingo is terrific when it works (i.e. OCEAN'S ELEVEN, CLUELESS) but positively painful when it doesn't.  Who thought "birdseed" as an expletive would elicit anything but giggles, or that "bustin' thumb" had a shot at catching on as slang for hitchhiking? 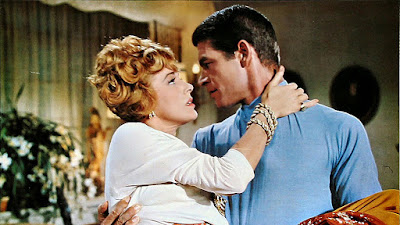 That aforementioned narration is given to first-time screen actor Bennett in another of the highly questionable decisions made by the filmmakers.  Bennett is the epitome of cool on the concert stage but he's completely lost trying to play "Hymie Kelly" (yes, really!), Boyd's socially inept but sensitive conscience.  Bennett is not only wooden, but clearly uncomfortable with his lines, delivering them rapidly with little inflection.  Not that the crooner should feel too bad about his debut. There's plenty of seasoned veterans making fools of themselves in THE OSCAR, including real-life Oscar winners Brennan, Borgnine, Begley and Crawford (as the bigoted "redneck sheriff").  Worst of all is the scenery-devouring Boyd, as the thoroughly uncompelling lead character--he's a heel (or, in this film's vernacular, isn't it a "fat honey dripper"?) in the beginning, a heel at the end, and a heel in between.  At least he's consistent.  To be fair it can't be easy playing a one-note character in one unrealistic, melodramatic scene after another.  Especially when you're forced to deliver howlers like: 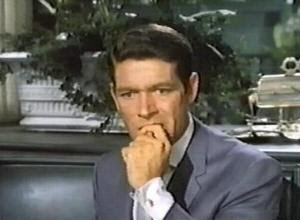 "You got a glass head.  I can see right through it!  It's how I know you're stupid!!" Or: "Will you stop beating on my ears! I’ve had it up to here with all this bring-down!"  Or perhaps: "You’re making my head hurt with all that poetry!"

Just to name three out of two hundred or so.  Perhaps even more puzzling than all the wasted talent in front of the talent is the appalling screenplay that somehow came from 11-time Hugo winner Harlan Ellison and former Oscar winners Rouse and Clarence Green.  Then again, Ellison's greatest triumphs came in science fiction and Rouse and Green won for the light comedy PILLOW TALK.  Maybe each man was, like Bennett, just out of his element here.  Boyd's reign of terror (i.e. ruining lives, ruining careers, causing a then-illegal abortion) results in a "comeuppance" that doesn't even seem like a slap on the wrist in comparison, but he looks ready for an institution regardless. 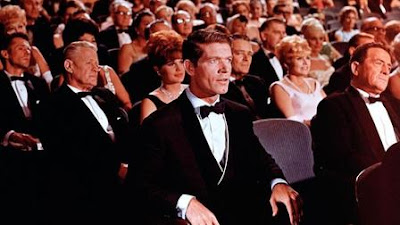 THE OSCAR might be the biggest career destroyer in Hollywood history.  It effectively ended the careers of Rouse and Green--Oscar be damned, THE OSCAR was the penultimate feature for both.  Ellison continued to win awards by the armful for his short stories, teleplays and novellas, but THE OSCAR would be his lone screenplay.  Bennett would never again play anyone but himself in a feature, and Boyd's big screen career fizzled quickly following the one-two punch of this film and THE POPPY IS ALSO A FLOWER.  Surprisingly, Berle who gives the film's best performance.  He often succumbed to hamminess in comedies, but Berle was effective in his infrequent dramatic roles (i.e. LEPKE).  He's a model of restraint here (certainly compared to Boyd) as the agent with a heart of gold, "Kappy Kapstetter" (yes---really.  Was there a plausibly named character in the entire film?). 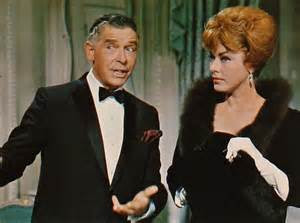 An embarrassment to almost all involved, THE OSCAR didn't come close to winning any Oscars but did get some love from the Golden Turkey Awards.  Still, that was 30 years ago, and this legendary baddie has slipped through the cracks since, while VALLEY OF THE DOLLS, THE SWARM, and the AIRPORT sequels continue to soak up the bad-movie love.   This is a wrong that should be righted: this oldie-but-baddie can stand toe to toe with any given year's Golden Raspberry nominees.  And so what if it's just two hours about a louse with no central theme?  According to Danny Peary, so is RAGING BULL--and this is a Hell of a lot funnier. 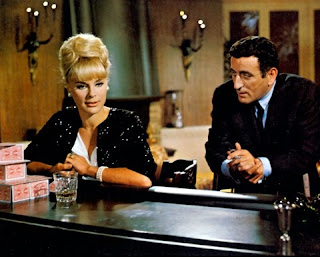 
THE OSCAR had the misfortune to be released just before film language became more frank and honest ("Birdseed"???), the studio system became obsolete (BONNIE AND CLYDE and EASY RIDER were both less than 3 years away) and the aforementioned, flashier DOLLS assumed the all-star baddie throne of the 1960's. 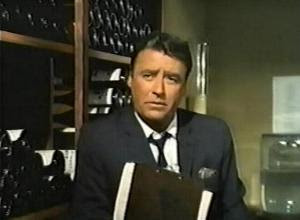 It may have been dated the moment it was released, but that only enhances the "appeal". THE OSCAR, long out of print on VHS, deserves more than just the occasional airing on TCM.  There's more than enough overwrought, badly delivered dialogue, ripe melodrama, and ridiculously named characters to keep a bad movie buff in glee for evenings to come.  It's also been way too hard to find for way too long.  Stop trying to sweep it under the rug!  It's comedy gold, I tell ya!

Very intrigued sir, this one I gotta see ASAP!

I remember seeing this movie, or parts of it anyway, on a local station's Sunday afternoon "Award Movie". (I guess Golden Turkey Awards count.) I read about it in GTA about the same time, so I think I knew what to expect.