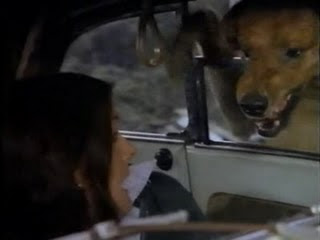 
Seal Island is a popular but isolated tourist destination with once-weekly ferry access, a handful of locals, and unfortunately a couple of dozen dogs who have been cruelly left to fend for themselves by vacationers returning to the mainland.   Starvation has turned man's best friend into rabid, bloodthirsty enemy.  With the next boat several days away and the loss of radio access to the mainland, locals Baker, Alexander-Willis and a host of visitors find themselves under siege and next on the menu for The Pack. 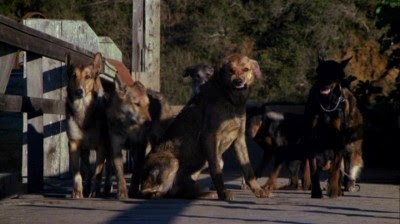 Martial-arts film specialist Clouse, best known for the genre classic ENTER THE DRAGON, directed (and also scripted, from David Fisher's novel) his one outright horror film with THE PACK.  Unfortunately it's a horror film that doesn't really pass the scare test. Perhaps Rotweillers, Pitbulls and Dobermans gone mad might have seemed terrifying.  But Collies?  Dalmations?  The supposedly famished canines curiously bypass some easy prey on occasion, such as ignoring a dozen live chickens and going straight for Alexander-Willis while she hides in her Volkswagen. 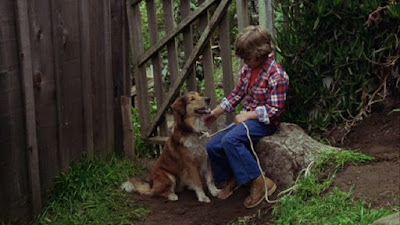 Despite the implausibility Clouse does a good job getting impressive performances from his pooches, helped considerably by trainer Karl L. Miller.  He also succeeds in building suspense where the prior year's DOGS failed, with the island a more convincingly remote atmosphere than a campus on the mainland. 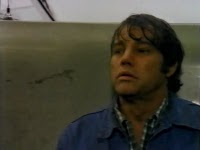 Unlikely leading man Baker usually played heavies, but he had about a five year window of opportunity for heroic roles in the aftermath of WALKING TALL.   Playing a marine biologist who owns his own loyal German Shepherd, Baker provides the needed sturdy-yet-compassionate presence.  Capable character actors are cast in the supporting roles such as Wertimer (the immortal Ned the Doorman from THE JEFFERSONS) and Willson, at the time a dead ringer for the BOOGIE NIGHTS-era Philip Seymour Hoffman.

Underneath it all, there's even a worthy message in THE PACK about responsible pet ownership.  But don't worry, Clouse is commendably subtle.  He sidesteps preachiness throughout and also avoids the maudlin until the closing minute of the film.  Hope that isn't too much of a spoiler, folks.


While Clouse's film is interesting and well-made, it just isn't very scary.  That's the main reason THE PACK has faded from memory.

The plot and setting recalls the camp classic THE KILLER SHREWS, but without the unintentional humor that makes that film so memorable, unless you want to count Willson's sprint in slow-motion. 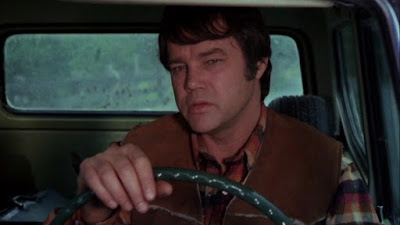 
Arguably best film of the "dogs attack!" sub-genre IMO; certainly the best made.  The others include the overrated CUJO (1983), the more credibly humorous MAN'S BEST FRIEND (1993) and the frankly lousy DOGS (1976).

Provides a very worthy, still relevant message regarding humane treatment of animals and responsible pet ownership and doesn't hit the viewer over the head with it.

PIRANHA, GRIZZLY and the other mid-1970's "nature attacks!" films have made it to DVD as have the aforementioned films with the exception of the abysmal DOGS.   THE PACK may not be a classic, but it is the most overlooked flick of its subgenre, which ought to mean something.