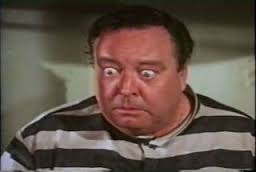 
If you've ever wanted to see Jackie Gleason out of his mind on drugs, you're officially in luck. No, I haven't unearthed a rare YouTube clip of the Great One signing on for SMOKEY AND THE BANDIT 3. On July 12th, Turner Classic Movies will be airing the rarely screened flower power camp classic SKIDOO as part of the TCM Underground series.

Ex-hit man Gleason is having a really bad evening. Wife Carol Channing(!) seizes his remote and daughter Alexandra Hay brings home hippie boyfriend John Phillip Law.  To add to Gleason's misery he gets word that his reclusive, germophobic old mob boss, Groucho Marx (as "God") wants him to end his 17 year retirement with one last "kiss"--on his best friend turned stool pigeon Mickey Rooney. The assassin flatly refuses at first, but quickly realizes after valet Stang is murdered that Groucho won't take no for an answer. Gleason reluctantly agrees to the job and quietly slips away from his family. One small problem: Rooney is an inmate at Alcatraz. 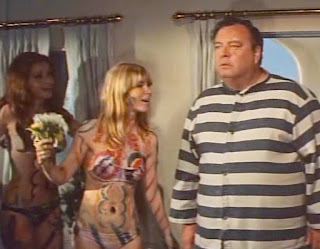 After Gleason is given his bogus rap and prison entry, he realizes he's put himself in a real catch-22. Rooney's testimony is vital to the Feds, and airtight security around him will make finishing the job nearly impossible. However, Marx and Co. won't pull the necessary strings to get him out until Rooney is silenced. As if that isn't enough for Gleason, his new cellmate Pendleton is one of those hippies. Resigned to a much longer stay in Alcatraz than he anticipated, Gleason decides to write home--using Pendleton's LSD-soaked stationary! Faster than even Tommy Chong could say, "Oh, no, don't take those, man...", Gleason licks the envelope.

While Channing searches for her husband with the help of Law and his compadres (and tries to seduce Marx's henchman Avalon(!) for information), Gleason laughs maniacally and gives us a few Kramdenesque eye bulges before fortunately settling into a good acid trip, seeing machine guns solving mathematical problems and Groucho's head on a rotating screw among other visions. He emerges from his moment of clarity detesting violence, and turns his thoughts towards skidoo-ing on out of prison and paying Groucho a visit on his yacht....which is also where Channing and company are headed.

The commonly held view is that Preminger, then 62, was too old and too rigid to effectively direct a hip counterculture satire. In truth, "awful" Otto had been pushing the envelope in Hollywood for years, addressing topics like drug addiction (THE MAN WITH THE GOLDEN ARM), rape, homosexuality (ADVISE AND CONSENT) and miscegenation, all of which took balls to tackle in the 1950's. As for the age factor, well...William Witney was the same age when he directed the equally insane (but hip, energetic and funny) DARKTOWN STRUTTERS, so that shouldn't eliminate Otto's chances of pulling this off either.

Instead, the key problem is that Preminger didn't understand comedy. The original script called for realistic, menacing gangsters colliding head-on with the Love Generation, but Preminger insisted on rewrites making the mobsters cartoonish. With no contrast between over the top hippies (the intended heroes) and absurd mafia men (the intended authority figures), there's no laughs, either. Screenwriter Doran William Cannon encouraged Preminger to play the material straight, but the director muddled matters by bringing in multiple outside screenwriters. The result was a film with no momentum that largely just lays there, with the drug sequences lacking the intended jarring effect. We get a series of bizarre hallucinations, and a few chuckles from them, but no consistent reality to contrast them with. 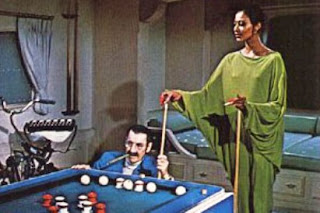 In addition to his wavering on keeping it real, Preminger made several bizarre casting decisions. Very badly miscast is 78 year old Groucho Marx as "God". Groucho is obviously reading damn near every line off cue cards, rarely bothering to look at his fellow performers. He isn't threatening at all, and unfortunately he isn't funny either. Not that he's given a chance to be---while it's shattering to see Groucho in this physical condition (embarrassingly sporting a bad dye job and his 1930's era painted-on mustache) it's equally heartbreaking to hear him deliver one unfunny line after another. So why cast him? If Groucho is playing the boss, give him some zingers! If you're going to have God played as dangerous and humorless, why not go for (say) Edward G. Robinson or James Cagney, and add some much needed verisimilitude to the proceedings? Saddest of all is Groucho making a halfhearted play for Hay. When Marx was first suggested for the role, Preminger reportedly dismissed him as "too old", then hired him anyway. His first instinct was obviously the correct one.

The director's strange decisions didn't end there. My impression is that he wanted to have as diverse and far out a cast as possible, with little regard for whether the actor was appropriate for the part. The only mobster with any air of authenticity is Romero. Avalon has a badly drawn mustache that doesn't stop him from looking like a teenager. George Raft (who might have been a great improvement as God as well) is wasted as the yacht's skipper, and ...well, Carol Channing and Jackie Gleason married? They have zero chemistry, and a real low point is Channing's strip-tease (!) as she attempts to seduce Avalon. That's right, we have Hay (who resembles Mena Suvari) and Luna (the Naomi Campbell of her day) on hand, and our lone striptease is from Carol Channing in a see-through bra. Thanks a lot, Otto.

The vast re-writing dilutes the intended pro-LSD message as well. Gleason's transformation from violent gangster to peaceful man searching for a greater truth is supposed to resonate, but due to the overall sloppiness in the approach this doesn't come off. For starters, he's been retired for 17 years, and refuses to do the hit at the beginning of the film. His only hint of his "old ways" is hitting Law when he thinks he's "making it" with his daughter. He reluctantly agrees to bump Rooney off only after being threatened. So he isn't presented as the most hostile guy anymore to begin with---then he swears off violence after his acid-induced revelation. Yet, we see him slapping Avalon around and threatening him at the end of the picture. Why? He caught him with his daughter! Some epiphany, huh?

Despite being a complete mess of a film, SKIDOO has its defenders, probably due to the once in a lifetime cast and the lengthy LSD sequences. After Pendleton's LSD stash finds its way to the entire prison population, we get to see Richard "Jaws" Kiel, Peter Lawford (a British U.S. Senator), and Otto's fellow BATMAN villains Burgess Meredith and Frank Gorshin on their own respective acid trips. Hallucinations include the Green Bay Packers playing in the nude and a chorus line of dancing trash cans. Harry Nilsson sings the closing credits, right down to the copyright date(!). And despite his poor overall performance, Groucho Marx at least ends his screen career on a high note, literally, dressed like a Hare Krishna and enjoying some "pumpkin" marijuana with Pendleton.

There's a lot of embarrassment at the Preminger Estate (Otto died in 1986) over the director's most notorious film. SKIDOO hasn't been screened at Preminger retrospectives and festivals, which is shocking because his other latter day stinkers (i.e. SUCH GOOD FRIENDS, the abominable ROSEBUD) are shown.  The latter is, IMO, much worse than SKIDOO.

Despite the numerous "you just gotta see it" moments, it just isn't a good film. Almost all the alleged comedy falls flat in the first half, and by the time we get some funny moments via an entire prison tripping, the plot has completely gone off the rails. And the uniformly strange casting choices are mostly misses.

Carol Channing in her underwear, including a see-through bra.  Not exactly one of those moments you just gotta see, I'll put it that way.

As poorly executed as it is, it's impossible to totally hate a film this gutsy. SKIDOO is a film that postulates that with a few mind-altering chemicals, even our most violent citizens can be pursuaded to put down their guns and make love, not war. LSD is given such a positive treatment here that out of an entire prison population on acid, there's not one bad trip out of all those, um, offbeat personalities! In addition to the pro-LSD stance, Preminger slips in some wild TV commercials with 5 year olds and dogs smoking cigarettes and also presents an interracial marriage just one year after the famous Loving case. 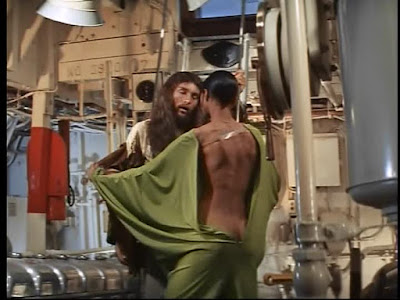 Supermodel Donyale Luna wears a backless green dress, showing off her booty crack for several seconds at a time, which almost makes up for the Channing striptease.  Almost.
Posted by Hal at 4:52 PM