Marki Bey (THE LANDLORD) is the title character, engaged to the highly successful owner of Club Haiti, Larry B. Johnson. When mobsters led by Robinson and working for Quarry barge in with an "ownership offer", Johnson rebuffs them...and promptly pays for his refusal with his life. Bey seeks revenge, but unlike Pam Grier or Tamara Dobson, she isn't suited to dishing this out physically. So, she decides on unearthly methods and seeks out voodoo priestess Zara Cully for assistance. Cully summons Don Pedro Colley and his sphere-eyed, cobweb covered "army of the dead". After Colley outlines his price, he urges Bey to "put them to evil use", and the creative revenge killlings start, one at a time.

SUGAR HILL comes across as a supernatural variation on Grier's COFFY and FOXY BROWN. The film starts poorly; there's literally all of 30 seconds spent establishing the Johnson-Bey relationship, and the scene in which Johnson is beaten to death is very unconvincing and lame to say the least. But if you can get past the shaky opening, you have an outlandishly fun blaxploitation revenge/horror film. This is Mazlansky's lone directing credit, and while he struggles mightily with the fight scenes (a later Bey-Rees catfight also misses the mark) and provides no nudity and little gore, he keeps things visually interesting, starting with a superb opening credits sequence involing a ritualistic dance and The Originals' eerie, tone-setting "Supernatural Voodoo Woman". 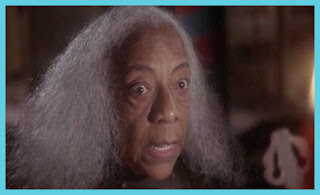 Despite a script that could have used another draft or two, Mazlansky and screenwriter Tim Kelly throw us several curveballs. For every genre cliche they revel in (i.e. racist white bad guys, multiple references to how "foxy" Sugar is) they twist two or three others. When Bey and Cully seek out the undead cavalry, they don't enter the graveyard in the dead of night: their arrival is in broad daylight. When Bey offers her soul in desperation for revenge, Colley laughs maniacally and declares, "it's not your soul that I want!". Yes, this voodoo master just wants to get his freak on! We expect policeman Lawson to get too close to the truth and to romance Bey, but his fate is also a surprise to us.

Bey is beautiful, but limited as an actress. It's telling that Colley, not Bey is the one required to don the various disguises during the revenge spree. Bey is merely adequate, contributing little more than eye candy and hairstyle changes. This dilutes the effect of her best post-mortem lines (i.e., "I hope they're into white trash"). IMO Rosalind Cash would have been the ideal Sugar Hill: equally gorgeous with a lot more range. Plus, she'd already dealt with zombies in THE OMEGA MAN. Much better is the 82 year old Cully (a.k.a. Mother Jefferson), who alternates glaring menace with occasional fiendish smiling at the antics of Colley's cadavers. Colley himself is delightfully over the top and runs away with the film. Incognito as a cab driver, dock worker, massage parlor receptionist, and gardening Uncle Tom among others, he smiles with glee at each twisted murder. He may be dead, but Colley adds the sorely needed life to the proceedings that Bey and a strangely sleepwalking Quarry can't. Colley's personas are every bit as good as Vincent Price's in THEATRE OF BLOOD, even if some of the actual murders aren't quite at that level of inspiration. His final shot, in which he takes his payment (again, not the one you'd expect) is one of the film's most memorable moments.

General rule of thumb: if your star isn't Pam Grier or Tamara Dobson, your blaxploitation film with a female heroine isn't on DVD. This is a real shame, as films starring Bey, Trina Parks, the late, great Diana Sands (HONEYBABY, HONEYBABY) and Jeannie Bell (THE MUTHERS) are among those missing. Guess I have a lot more films to review.

SUGAR HILL's low budget hurts. So does the lack of nudity, generally bloodless violence, and mediocre performances from Bey and lead villain Quarry.

As noted above, the screenplay could have used another run-through. There's an underwritten dynamic between Robinson and Quarry, Bey's relationship with Johnson gets insufficient screen time, and the subsequent murder would have taken about 5 minutes to solve, given the fact that Bey saw the assailants, etc. Lots of suspension of disbelief required to get to the good stuff here. 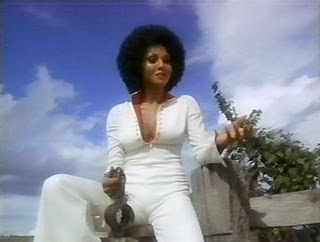 There are two terrific performances here from Cully and Colley. Colley's in particular is among the best in this subgenre, rivaling William Marshall's BLACULA and Glynn Turman's tour de force in J. D.'s REVENGE.

SUGAR HILL is rarely aired (though it was on TCM in May) and is very worthy of a wider audience. If you like the Grier and Dobson films that are out on DVD, you'll certainly want to give this one a look.
Posted by Hal at 12:08 AM