Why the Hell isn't CANNON on DVD yet?


No, not THE action studio of the 1980's; plenty of their films are on DVD. I'm talking about the TELEVISION classic from the 1970's. It is downright criminal that this worthy CBS actioneer has yet to hit the shelves of Best Buy and Wal-Mart in complete season sets.

It was the decade of the character crime drama: Columbo was sloppy, Barnaby was old, Kojak was bald....and Frank Cannon was, well, portly. 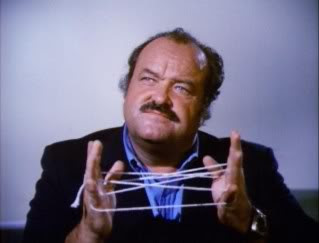 Played by quintessential narrator (including F TROOP's pilot episode) William Conrad, CANNON is hefty, balding, and retired from the L.A.P.D. Now a private eye, he takes typically expensive cases, though in later episodes he occasionally developed a heart of gold and helped someone in trouble with little money. Cannon definitely needs the money; he lives in a very expensive high-rise apartment, drinks fine wines, and eats. Boy, does he eat, as the above TV Land promo shows.

At age 51 William Conrad finally got his big break in front of the camera (he'd been known as the voice of Marshal Dillon on radio for years, as a ubiquitous narrator and occasional director) and made the most of it, giving an Emmy-nominated performance and completely carrying this 5 year (1971-76) crime drama on his shoulders. And I do mean completely. Conrad was CANNON's only regular, which makes this a real blast from the past; just a few years later every P.I. or cop past age 45 seemed to require a young sidekick to pull in the female viewers. Or so the networks thought.

This Quinn Martin production boasted compelling stories (especially for the first 3 seasons), occasional crossovers with Buddy Ebsen's BARNABY JONES, and quite a bit of unintentional humor in the later episodes. No, not quite on the level of QUINCY, M.E. for that, but one marvels at Cannon's ability to run people down from behind and hit anyone and anything from up to 500 yards with his handgun. The wonderfully cheesy third season episode, "Photo Finish", which guest starred ubiquitous 1970's villain Jack Cassidy, is a fine example of the latter.

And then there's "The Wrong Medicine" from the final season, in which you'll marvel at how well Cannon holds up after being poisoned at gunpoint by a couple of crooks, who curiously don't stay long enough to make sure he's dead. 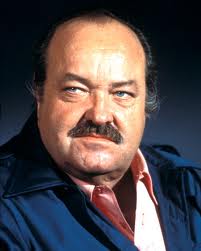 But I digress. The cheese is far outweighed by some good stories, classy Quinn Martin production, and a likable average guy star finally getting his due after nearly 30 years in the business. CANNON was a big hit in its day, ranking as high as 10th in the Nielsens in 1973-74, and deserves to not only be rerun to death somewhere (American Life, I'm looking at YOU!) but to be issued on DVD.

Enjoy the above promo and remember not only CANNON, but the days when TV LAND was actually a good channel that connected you with shows you HAVEN'T already seen on a dozen other channels today. Behold, the Frank Cannon diet!
Posted by Hal at 3:52 PM

It took awhile to get any Quinn Martin on DVD, but now that THE FUGITIVE, THE UNTOUCHABLES and THE STREETS OF SAN FRANCISCO are out (and hopefully selling well), CANNON has a chance. I agree--very good show anchored by Conrad's sturdy performance. For other good work by Conrad, see THE RIDE BACK, a western in which he co-starred with Anthony Quinn.