In the aftermath of Surgeon General Luther Terry’s landmark 1964 statement on the health hazards of smoking, tobacco companies face the Cigarette Labeling and Advertising Act and the removal of cigarette ads from television in quick succession. Valiant Tobacco executive Bob Newhart has an idea to combat the unprecedented scrutiny of his industry. Reasoning that Alfred Nobel’s Prizes eventually obscured his invention of dynamite after his death, he implores invalid chairman Edward Everett Horton to offer $25 million to any town in the U.S.A. to succeed in having all of its citizens give up smoking for thirty days.  Naturally no one within Valiant Tobacco dreams they’ll ever have to actually pay this. But the citizens of the depressed town of Eagle Rock, Iowa are willing to go for it.  Having recently lost a nearby military base, they are spurred by minister Dick Van Dyke and mayor Vincent Gardenia to take on the challenge and use the winnings to rejuvenate their dying economy.

So, we have a bona fide feel-good story on our hands! 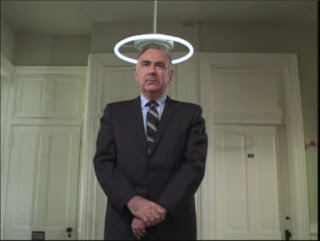 Well, perhaps...if it was directed by (say) Ron Howard….but this one is written and directed (his debut) by the always provocative Norman Lear, his last film project before he would change the face of television with ALL IN THE FAMILY. At first glance COLD TURKEY appears to be an inspiring tribute to the determination of the underdog and America’s heartland. But the film is soon revealed to be a scathing yet low-key examination of the self-serving interests of everyone involved, whether they are tobacco executives, preachers, doctors, politicians, holistic healers….or prostitutes. It also proves to be a tossup whether greed or nicotine withdrawal brings out the very worst in people.

Satire, we’ve all heard countless times, is what closes on Saturday night. In this instance, satire sat unreleased for two years and then closed on Saturday night in 1971. I don’t buy the theory that it was too cynical to market for 1969 audiences: after all, PUTNEY SWOPE, MIDNIGHT COWBOY and EASY RIDER were all released successfully that year. Instead I think it was difficult to market due to the lack of box office names save for the then slumping Van Dyke, who was coming off a string of bombs both critically acclaimed (THE COMIC) and downright embarrassing (SOME KIND OF A NUT).

Top billed Van Dyke seems a bit miscast as Eagle Rock’s pompous religious leader and the driving force behind the thirty day pledge.  While it's easy to buy people falling asleep in his church, it isn't so convincing to see them dutifully falling in line behind him to sign the pledge, money notwithstanding.  It was understandable why wife Scott was irritated with him, but 4,006 citizens being inspired or (especially) bullied by the Reverend?  Bit of a stretch.  Van Dyke is usually tasked with playing the increasingly insane situation straight and providing contrast to those crazies around him.  At times, though, he's as manic as he was in WHAT A WAY TO GO!, uncharacteristically killing some laughs. 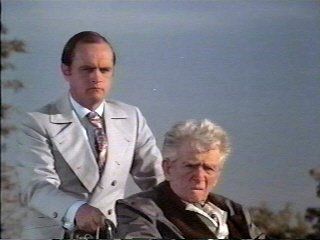 Side note: I think Andy Griffith could have been interesting as the pastor. The one-time Lonesome Rhodes had already proven that he could be intimidating and captivating at the same time.  A slightly devious twist on his image likely would have been welcomed by Griffith after 8 years of Sheriff Andy Taylor.  Ironically, Griffith was returning to features as a small town minister in ANGEL IN MY POCKET (co-starring Van Dyke’s brother Jerry) at the time COLD TURKEY was filming. 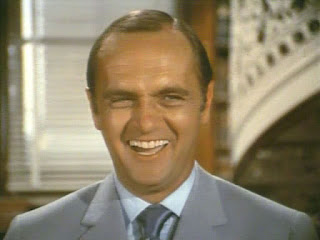 There is an opportunity to see one perennial TV nice guy play nasty, though. Bob Newhart gets to play a sleazeball--and to get deranged, even (during the film’s frenetic finale). He is more effective reacting to the lunacy of others, but seeing a shady, animated Newhart is very interesting to modern eyes. The role of great reactor in this film instead goes to Edward Everett Horton, who in his final film is mute, hilariously deadpan….and audibly flatulent a full 5 years before BLAZING SADDLES. 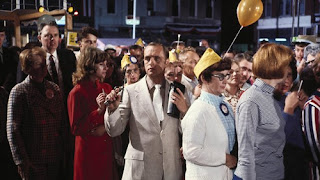 Lear’s best work would come on the small screen, but he also wrote some very good screenplays, including THE NIGHT THEY RAIDED MINSKY’S and DIVORCE AMERICAN STYLE (also with Van Dyke). This was his most ambitious script to date and he made wise decisions in the use of Greenway, Iowa for filming and a young Randy Newman for the sardonic soundtrack. Lear provides his best laughs with an inspired series of sight gags highlighting the effects of withdrawal. But his debut in the director’s chair is marred by a sloppy finale. The denouement involving three of the principals is very poorly executed and unconvincing. (Newhart is actually laughing when he clearly wouldn’t have any reason to, for example.) And the surprise appearance at the end is also poorly executed. It is too obviously an actor wearing an ill-fitting mask every bit as authentic-looking as one from the Shelley Berman TWILIGHT ZONE episode “The Mind and the Matter”. 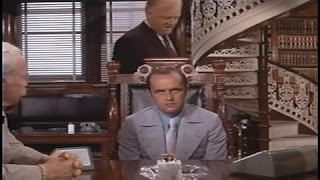 COLD TURKEY had a troubled production history and might well have gone unreleased even longer if not for Lear’s overnight success on TV. Van Dyke is miscast, and he hasn’t headlined a feature since. While the film is funny, it has few jokes that cross over from “amusing” to “hilarious”.  Perhaps most damaging, the overall impact is diluted by a finale that's way too slapdash.

Still a funny and interesting film, with a loyal cult following, and some sharp satirical arrows pointed at The John Birch Society, “wholesome” middle America, peer pressure, big government, capitalism, addiction (with no nicotine, other addictions, including alcohol, seem to increase a great deal) and greed, among other things.

COLD TURKEY is also prescient: we get an early look at instant celebrity and what would become Reality TV 30 years later. There’s also eerie foreshadowing of the worst of post 9-11 America in noting how the desperate town leaders give a lot of authority over to a group of extreme right-wingers. Lear could really get overbearing in his most topical 30 minute TV episodes, but he makes most of his points subtly and effectively given an hour and a half to do so.

Over a dozen cast members who would become big names on network television in the decade to come, many of them in Lear’s projects. It’s fun to spot them all. Lear himself has a cameo.

The Big Clock says it’s time to release COLD TURKEY on DVD. And big clocks are never wrong!
Posted by Hal at 8:12 PM

I agree on how prophetic Cold Turkey is. As one how has lived in Iowa most of his life, where most of Cold Turkey was filmed, I've seen instant celebrities such as Shawn Johnson and the McCaughey septuplets, the caucuses hyped being up, obesity and reality TV stars such as "Prince Farming" seeking their 15 minutes of fame. Norman Lear's movie was right on the mark. I agree--Cold Turkey should be on DVD--and available on such services as Netflix as well.

Saw it on diginet THIS TV, excellent film!