Billy Wilder and longtime collaborator I. A. L. Diamond worked together one last time on BUDDY BUDDY. Adapted from the solidly funny 1973 French hit, L’EMMERDEUR (a.k.a. A PAIN IN THE A--), it would be Wilder’s cinematic swan song.

Walter Matthau is an aging but resourceful and efficient hit man assigned to eliminate 3 government witnesses before a key trial. Having dispatched the first two using disguises, he makes his way to Riverside to finish the job in a hotel across the street from the courthouse. However he has the bad luck to have a room adjacent to clumsy network censor Jack Lemmon, who is a suicidal wreck after losing wife Paula Prentiss to sex guru Klaus Kinski. Afraid that Lemmon’s suicide attempts will attract the attention of the police, he tries in succession to incapacitate Lemmon, patch things up in Lemmon's marriage, and kill Lemmon himself(!). Failing at all three, he drives Lemmon to meet Prentiss face to face. With the hour fast approaching, Matthau hurries back to the hotel and diligently lines up his shot, not knowing that Lemmon is back in his room with one last suicide try in mind.

In adapting L’EMMERDEUR, Wilder and Diamond eliminated script elements making the hit man more physically imposing (Matthau just couldn't look as intimidating as Lino Ventura), changed the milquetoast’s profession from shirt salesman to network censor, and also revised the denouement. Sadly, there’s quite a bit of evidence that Wilder, at 74, had lost his fastball.  There’s one scene satirizing hippies (in 1981?), an embarrassing scene in which the hotel’s cleaning lady doesn’t notice a bound and gagged Lemmon when she comes in to clean up, and several lapses in logic.  A few examples: Matthau’s character implausibly uses his real name when checking into the hotel (unless the target knows Matthau's alias), the police roadblock is remarkably easy for Kinski, Lemmon and Prentiss to get past, and most far-fetched of all, Lemmon suddenly becomes way more helpful than such a rigid, uptight guy possibly could at a key moment.

But just as Joe Montana had some moments of brilliance left after his trade to the Chiefs, elder Wilder still has something in the basement (as Rocky would say) despite the misfires. The new ending is darker than the original's as Wilder and Diamond avoid the feel-good copout that marred their otherwise great THE FORTUNE COOKIE. Casting Kinski as a deadpan sex guru is good for a few laughs, and Wilder and Diamond deliver some priceless dialogue between the laconic and profane Matthau and the garrulous, clueless Lemmon regarding Lemmon’s job and sex life. 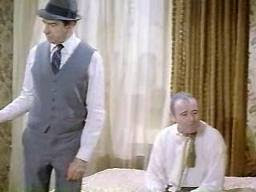 Like the same Christmas season’s NEIGHBORS, BUDDY BUDDY featured a beloved comedy team switching their normal roles--this time it was Lemmon’s character aggravating Matthau’s. Their remarkable chemistry is palpable, and both actors remain in peak form, with Matthau getting the opportunity to don various disguises and to utilize a very funny “tough guy” voice. As expected Lemmon matches him, taking strutting pride in his work as CBS' “Iron Duke” and registering great reactions as it slowly dawns on him just how unhappy his wife has been.

BUDDY BUDDY is disappointing because more is expected from Wilder and Diamond, but it isn't the worst Lemmon-Matthau teaming.  It was our last time to see this terrific comedy duo together before both men reached old age: after BUDDY BUDDY’S box office failure they wouldn't reunite until GRUMPY OLD MEN.

A flop when released, as Lemmon and Matthau were both starting to fade at the box office at the dawn of the 1980’s. Their next teaming wasn't until 1993 and was a surprise smash during that Christmas season, reviving the box office viability of the Lemmon-Matthau team for 3 more films with both actors well into their seventies.

The film’s reputation remains poor, as it is largely forgotten; strange given the stars and director.

The title sucks.  Maybe they couldn’t have put A PAIN IN THE ASS on the marquee in 1981, but in terms of generic and uninspired titles, BUDDY BUDDY is just one step above NOTHING BUT TROUBLE.

Interesting for the Lemmon-Matthau role reversal; this time Lemmon is the pain in the ass while Matthau does a slow burn. It’s kinda fun after seeing the opposite in THE FORTUNE COOKIE, THE ODD COUPLE and THE FRONT PAGE.

Would make a great Two Pack paired with the French original, which also needs to be on DVD in the U.S.

For historical purposes alone. Wilder was one of the greatest filmmakers of the 20th century, and his latter day films should be easily available. Hey, very few great filmmakers go out with a SOME LIKE IT HOT or APARTMENT. If, say, A COUNTESS FROM HONG KONG is on DVD, then BUDDY BUDDY (and FEDORA, Wilder’s interesting penultimate film, likely to be reviewed here at a later date) should be available as well.
Posted by Hal at 11:45 PM

I love it ! Very creative
! That's actually really cool Thanks.

It stinks!. Even worse than THE FRONT PAGE.