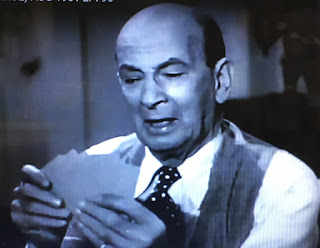 
Introduction to the Horn Section's Leon Errol Salute Series at this link.

In an effort to finagle a big contract out of poker fiend McCormack, Leon hosts an all night card game at his house, inviting the financier, McCormack's associate Jamison, policeman Billings, and Errol's business partner Harry.  Gambling?  Only on that business deal.  Leon intends to lose money now to get it back tenfold later when McCormack signs, and even fouls Harry's full house to grease the wheels. 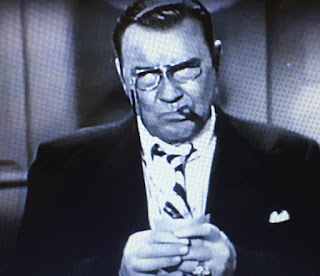 Alas, the game breaks up at 3 A.M. and Leon will need to keep it going the following week if he wants contract signed.  The game ends just in time for Errol to catch his daughter Wendy sneaking in from her date with Bill.  Despite the poker plans, the ever-watchful Dad demands that Wendy Errol stays in the following weekend, unknowingly creating an obstacle to his riches.   Harry creates a second one when he disinvites Billings. 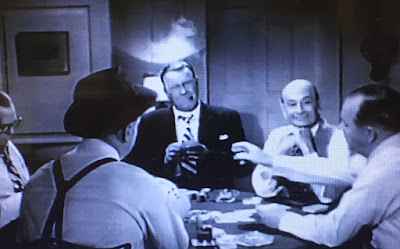 Deal Me In is the sole Errol entry credited to Hattie Bilson, wife of George, the producer of numerous two-reelers in the series from 1944 to 1951.  Mrs. Bilson wrote several Pal shorts for RKO's canine star Flame (the Wonder Dog), and her contribution marks quite a departure from the norm for Leon. 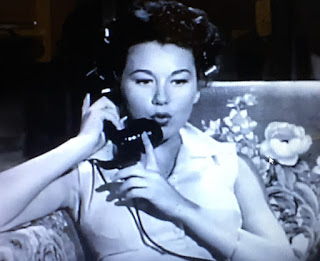 Mrs. Errol is nowhere to be found and unmentioned throughout, making Leon a single parent--no wonder his mind is on making the most of his business.   The unsupervised Mr. Errol shows atypical self-discipline, totally avoiding alcohol and women.  The only person sneaking into the Errol household at three in the morning is Wendy.  Okay, technically he is gambling, but the (rigged) card game is merely a means to an end.  This Leon Errol is a sober, responsible parent, but don't worry.  He still produces a lot of laughs. 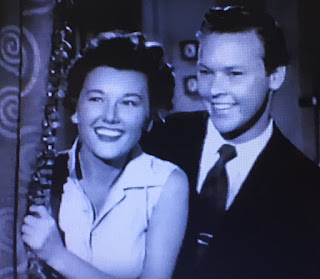 Since Wendy is confined to the home, Bill comes to see her, with both planning to disrupt the game enough to free Miss Errol from her house arrest.  Trick decks, "innocent" hand reveals, temperatire malfunctions and fine feathered visitors are among the annoyances to follow, with the septuagenarian star given the opportunity to show he's still a nimble physical comic.  While that trademark rubber legged walk is AWOL in Deal Me In, Leon's anomalous antics include disguising himself as a vase(!), mimicking his sneaky offspring, and arguably the highlight, attempting to apprehend that pigeon who has stolen Jamison's toupee. 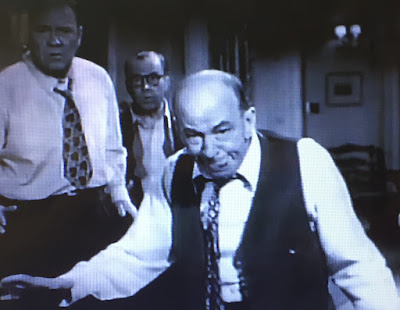 It's a bit ironic that a teetotaling Errol ends up in jail (pissing off a detective isn't a good idea when there's gambling going on) while the plastered version usually ends up making it home, but even the pokey doesn't stop the poker.  While Deal Me In wouldn't exactly be one of my choices as an introduction to the Leon Errol two-reelers, it's a solid change of pace for inveterate viewers of the durable RKO series.  (**1/2 out of four)