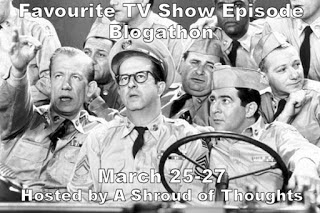 Welcome to the Horn Section's contribution to the 2nd Favourite TV Episode Blogathon, hosted by our friend Terence Towles Canote at his wonderful blog, A Shroud of Thoughts.  Check out all the other entries for what we hope will continue to be an annual event, and while you're there, check out Terence's archives as well--A Shroud of Thoughts has been around since 2004 and the archives are stuffed with goodies.

THE PHIL SILVERS SHOW was a remarkably and meticulously written creation from the great Nat Hiken, who realized his vision immediately.  By the second episode, "Empty Store", the show's formula was established.  Nominal commanding officer Colonel Hall would spend most of his time trying to figure out what was really behind some seemingly innocuous Bilko request, and "Ernie" would always be one step ahead of him and everyone else.  For all the Sergeant's cunning, though, deep down, he was a softy--not a sociopath.  The series original title spelled it out for Bilko: YOU'LL NEVER GET RICH.  But on the bright side, he'd never be supplanted as the man who really runs Fort Baxter either. 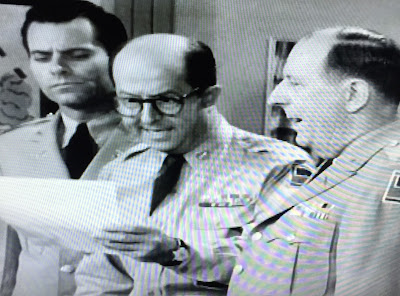 I previously highlighted the first season entry Centennial, a great example of one of BILKO's most commonly used sits to set up the com--the arrival of an outsider threatening to disrupt Bilko's well-oiled operation.  Such segments were almost always home runs, whether the new arrival was a visiting officer (Centennial), a muckraking reporter (The Secret Life of Sergeant Bilko) or even a visiting lecturer (The Twitch).  The show's supporting players almost always got individual moments to shine in these episodes, which was challenging given the show's expansive cast (22 regulars were stationed at Fort Baxter at one point).

Despite the large cast, and the popularity of Maurice Gosfield's sad-sack Private Doberman, BILKO was far less of an ensemble than the military comedies it inspired (McHALE'S NAVY, F TROOP).  As suggested by its change in title during the first season, THE PHIL SILVERS SHOW was vehicle tailored to the talents of its star.

No disrespect intended for the contributions of Gosfield, Joe E. Ross, Allan Melvin, Karl Lukas, Maurice Brenner and the rest of the motor pool platoon.  But let's face it: the bulk of the show fell on Phil Silvers' shoulders--case in point, none of the above take part in this blogathon selection.  If not for appearances by Paul Ford (and an uncredited Billie Allen as WAC Billie, with no lines) no one else from Fort Baxter would appear in Hollywood at all.  This episode is truly Silvers' show wire to wire. 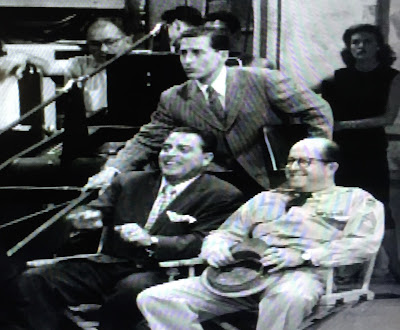 Hollywood is also the first of another subset of installments that showed Sergeant Bilko's inimitable skills unleashed on the civilian world outside sleepy, long-ignored Fort Baxter. ("The Pentagon is calling?  They must have the wrong number!"--Colonel Hall) The Sarge would later end up in Monte Carlo (hilariously trying out a foolproof roulette system) and on Wall Street (temporarily making a killing).  Ernie would also chisel his way into the spotlight in an army training film and an all-army special hosted by guest star Ed Sullivan.  All classic BILKO's, and all a result of the wild success of this initial furlough in Tinseltown.

To be sure, Nat Hiken was never that fond of the titular movie capital.  Television production moved rapidly from New York to Los Angeles in the late Fifties, but Hiken didn't relent and move with it until years later.  I'd imagine this quintessential champion of East Coast television delighted in penning Hollywood. 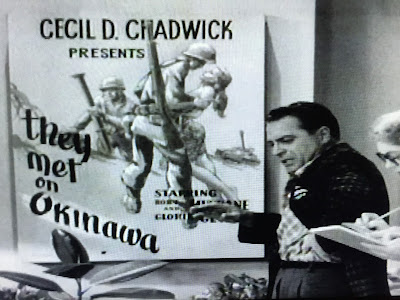 After a string of WW2 themed 'sexy' hits (like They Met in Okinawa), Chadwick's creative team sets its sights on the Battle of Kabuchi for Guns, Guts and Gals.  The higher-ups at the Pentagon would prefer that Chadwick Productions seek their moneymakers elsewhere, but General Merritt admits that non-cooperation with Chadwick Productions is a losing battle: "Chadwick will make the picture anyway, and at least this way we'll know they're wearing United States uniforms!"

Chadwick needs a technical advisor who "fought in the Battle of Kabuchi and is still in the Army", and after a decade, only one serviceman fits the bill: Sergeant Ernest Bilko of Fort Baxter.  While the most powerful military in the world may be completely helpless to stop Tinseltown, Sergeant Bilko is a different matter.  Hollywood's unique hook is that Bilko, usually a man subverting the ultimate faceless bureaucracy--that Army--is unknowingly doing just what the Pentagon wants by simply being his scheming, conniving self. 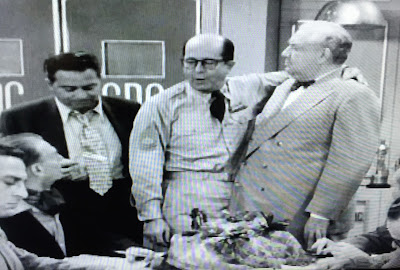 By the time Bilko has arrived, Guns, Guts and Gals has a title change to Love in a Foxhole ("gals" is too tacky for Chadwick's sensibilities).   Technical advisor Bilko is to be a mere figurehead--the script is already written, and he'll be sent back to Fort Baxter once the publicity photos are taken.  But Chadwick's flunkies are no match for the career soldier, and neither is the producer himself once the Sergeant starts dividing and conquering. 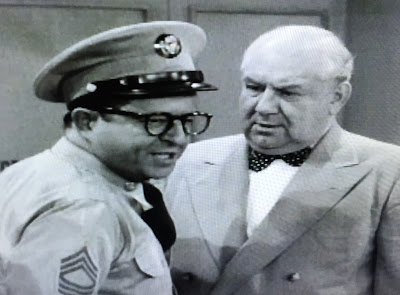 It's a classic scene, with Bilko successfully getting under the skin of virtually everyone in the room: director Sampson (accused of keeping scuttlebutt away from "Hokey Pokey" Chadwick), the screenwriters (who Bilko claims don't even have the climactic battle on the correct location), leading man Rory Mundane (deemed perfect for the role of Sgt. Skinner once Bilko sees the "ugly mole" on his cheek) and Chadwick himself, whose films "kept our minds off the War" and possesses production skills unsurpassed "since Georgie Jessel".  Cecil D. smells a troublemaker, but Bilko (likely bluffing) already has the numbers for every gossip columnist in town (starting with Hedda Hopper and Louella Parsons), so simply sending him back to Kansas won't do.

Realizing that they can't beat him, they decide to join him, and find Bilko's doppelganger to play a bit part.  Rather than "stars in his eyes", Bilko sees dollars, threatening a libel suit since he "had a full head of hair" during his tour of duty on Kabuchi.

Bilko emerges from the infighting with his own personal director's chair ("call me E.B."), a production hopelessly behind schedule, and Chadwick begging the Sergeant to get the picture rolling.  By the time handsome Mundane is playing him ("here's the ammunition?") the exasperated producer finally pulls the plug on his box-office busting war series and sends a scathing letter to General Merritt--which results in "Ernie" getting another month long furlough from his grateful commanders in D.C.


Gruff character actor Howard Smith (HAZEL) sputters and fumes memorably as Chadwick, but perhaps the funniest supporting performance comes from future RAWHIDE star Eric Fleming as his top box office attraction Rory Mundane.  Using a hilariously hammy "matinee idol" voice, Fleming's interpretation of a vainglorious Hollywood "war hero" leaves a terrific impression with barely a half dozen lines.  Enraged to learn about the real-life "scrawny, lisping" character he's playing, Mundane becomes positively livid when Bilko decides he is well cast.  While uncredited here, Fleming would return to the series as The Face on the Recruiting Poster (the intended one, anyway). 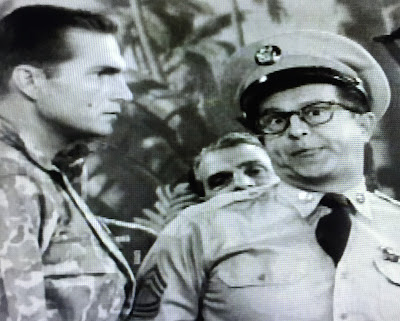 While undeniably presented as trashy (by 1956 standards), Chadwick's productions are lent a distinct touch of class with songs by Oscar-winning composer Jule Styne, who plays himself and writes "My Heart is a Burned Out Shell" for the doomed feature.  A regular at Hiken's (and Silvers') weekly gin rummy game, Styne received a whopping twelve Academy Award nominations in all, winning for 1955's THREE COINS IN THE FOUNTAIN.

Speaking of Oscar winners, THE PHIL SILVERS SHOW soon had a technical advisor of its own not long after Hollywood aired--George Kennedy, who would parlay the duty into his first acting roles.  Kennedy's debut, The Court-Martial (from March 1956) could have easily been my choice to highlight here. 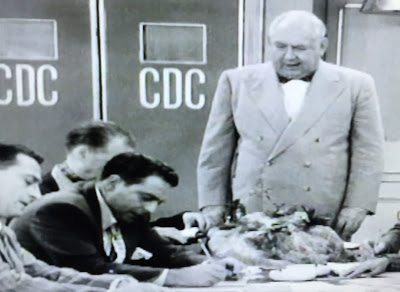 While references to Jimmie Fidler and George Jessel's career in film production haven't aged that well, and Chadwick's sarong-heavy flicks don't seem so sleazy by modern standards, Hollywood remains a hilarious skewering of the city that would replace Hiken's beloved NYC as the U.S. television capitol.  Quite a warped hierarchy: the Pentagon is helpless against Chadwick, Chadwick kowtows to the power of the press, and all of the above are completely impotent against one Sergeant Ernest Bilko.  In my opinion, the best of the episodes that had Nat Hiken's timeless military creation invading civilian life.

THE PHIL SILVERS SHOW airs on MeTV every Monday morning at 12:30 AM Central.
Posted by Hal at 9:28 PM

When I was a kid I didn't so much watch "Bilko" as watch my dad watching "Bilko" - his laughter and convulsions were a show all their own.

I think it's no secret that The Phil Silvers Show is one of my favourite sitcoms of all time. It definitely my favourite Fifties sitcom. As you point out, Phil Silvers was definitely the star of the show and his talent was put to good use on it!"Hollywood" is one of my favourites. It is a wonderfully sophisticated episode, and it's great to see Bilko go up against the Hollywood machine. You did a wonderful job of covering it as usual! Thank you so much for contributing to the blogathon!