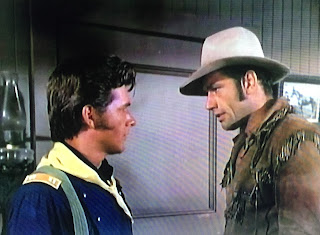 "Your Lives are Meaningless compared to HONDO!"

While lassoing a wild horse he intends to sell to Richards, Ponce Colorados is ambushed by Sand and Dink, competitors also seeking to make the Army transaction.  Witness Hondo comes to Ponce's aid, and the grateful Apache Prince (son of Chief Mangas Colorados) gifts the scout with the stallion he just captured.  The would-be thieves vow revenge. 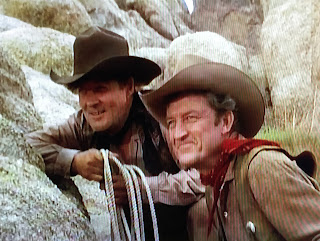 Once he's back at Fort Lowell, Hondo learns his new assignment: assisting General Luther B. Rutledge, a veritable living legend whose battle tactics from the Civil War are required study at West Point.  The blustery thirty year veteran has been sent from Washington to inspect all frontier posts and "improve conditions" for both settlers and natives. 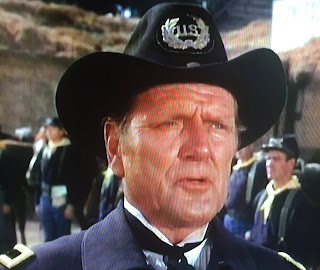 Ostensibly there to learn and report, Rutledge imposes his "by the book" philosophy despite Hondo's advice that the west requires flexibility.  The General's resolute belief in army regulations results in the imprisonment of Ponce after Rutledge is accidentally hit in a melee (instigated by Sand and Dink).  After five days in solitary confinement, "the book" also calls for a dozen lashes with a whip for striking an officer.  The same punishment once befell Ponce's late father at the hands of the Mexican Army, and the General is undeterred by Hondo's revelation that the Senior Colorados killed 100 enemy soldiers for every scar afterward. 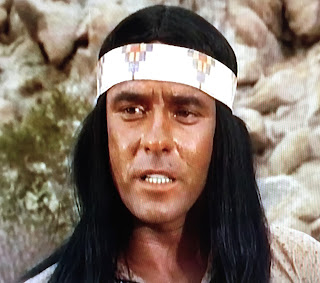 Frolific TV western scriptwriter Chase crafted an atypical HONDO in his series debut.  Sam disappears after the teaser, and the Dows and Chief Vittoro are completely absent--the latter certainly would have echoed Lane's warnings to General Rutledge.  But while the Chief of the Apache Nation isn't present during Hondo and the Savage, his desire for peace is shared by Ponce Colorados. 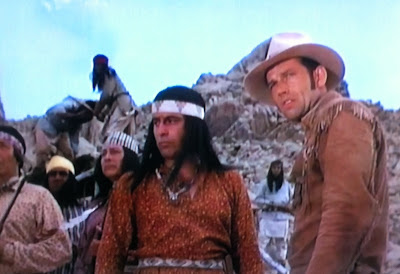 Actually, despite his great personal pride and fearsome reputation, the Prince's ambition to maintain harmony with the white man even exceeds Vittoro's.  Witnessing his father's vengeance and the resulting bloodshed as a child affected Ponce greatly---he is determined not to follow in Magnus' footsteps.  Ponce resolves to establish mutually beneficial co-existence and trade with Captain Richards and even orders the Apache braves to stand down while their leader is brutally punished in front of them. 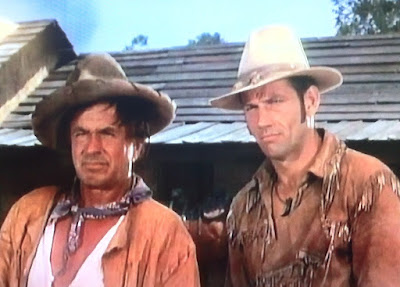 The younger Colorados also takes mercy on the surrounded soldiers in battle, and resists the temptation to take full Apache revenge on the captured General when the opportunity presents itself.  Ponce's almost pacifist leanings don't diminish his ability on the battlefield (which the Prince capably displays after the General blunders into Apache land), but even-tempered, cerebral leadership away from combat is his defining quality. 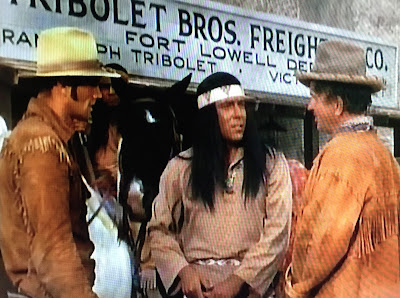 Speaking of tempers, the closure for Lane's long-lasting grudge against his wife's killer in Hondo and the Superstition Massacre brought a noticeable improvement in Emberato's oft-referenced short fuse.   Lane is just as assured with the highest ranking U.S. officer as he is with Apache royalty: it is the revered "wise" elder Rutledge who is the hothead out West, with Lane more than once providing measured, cool counsel. 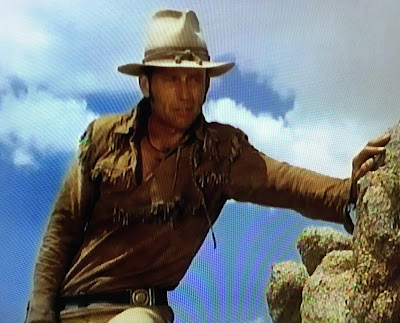 The show's protagonist isn't the only one showing remarkable growth in the five episodes to date.  Formerly advocating extermination over conciliation (in Hondo and the War Cry), Captain Richards' own personal vendetta after his brother's death has softened also.  With Vittoro's consistent honesty and Lane's input taken into consideration, Richards now negotiates trade agreements with Colorados with full trust.  The Captain is in a difficult place: siding with Lane, but required to follow Rutledge's wrongheaded orders.  It's enough to drive teetotaler Richards to have a rare (offscreen) drink. 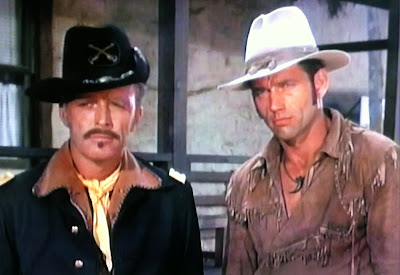 While Hondo's half-Apache status is never mentioned, it certainly wouldn't make Rutledge any more receptive to advice from the "Confederate Captain" he dismisses derisively.  The General is exalted upon his arrival, but proves to be stubborn, prideful, and bigoted.  He underestimates the "savages" every bit as much as Colonel Thursday does in the similarly themed FORT APACHE. 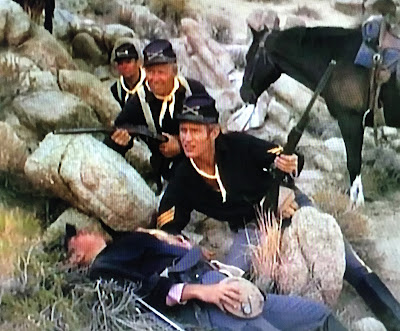 Even a pro like Chase isn't immune to laying it on too thick sometimes, and that's this segment's most significant drawback.  General Rutledge shows humility in his opening scene, fully aware he has a lot to learn about the West--but not one of his subsequent actions show any of this perception.  The Book Soldier's rigid adherence to the Army Manual, frequently stated to be his defining character trait, disappears quickly when he's faced with the same humiliation he subjected Prince Colorados to: the General is completely out of control, crazed enough to attempt to murder the only man who can get him back to the Fort safely. 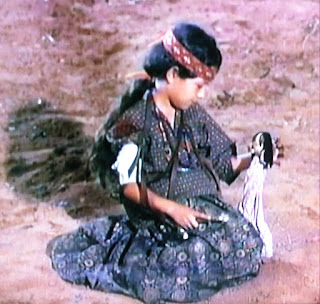 "Prince of the Apache Nation.  General, out here he outranks even you."

In comparison, patient Ponce shows seemingly infinite discipline and wisdom.  He's Rutledge's superior in every way: handling punishment in a more mature fashion and much more forgiving of a similar accident by Rutledge at the Apache village.  As a result of the script's heavy-handedness, one is perplexed as to how Rutledge ever reached his current stature in the first place, and the General's closing monologue comes uncomfortably close to a sitcomish character change as resolution.   That it works as well as it does is a credit to Charles MacGraw's robust portrayal of an inconsistently written antagonist. 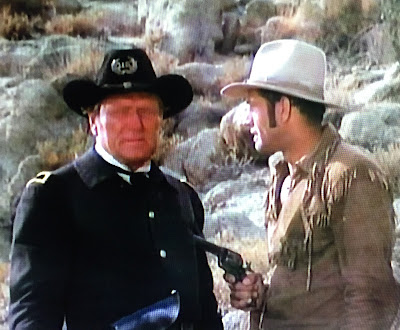 "I'm going to wash some of the stink off my soul."

Hondo knows the unintended consequences of fighting for the wrong reasons all too well from his war experience, but there's about as much chance that the General will listen to Hondo Lane as there was of Colonel Owen Thursday taking Captain York's advice.  However, Lane has the key advantage of talking to an esteemed older man at the tail end of a long career instead of a "disgraced" young officer who's been demoted.  Thursday was seeking to reestablish lost glory at any cost, and York couldn't talk him out of a foolish long-odds gamble to do it.  But Rutledge's glory is still intact to everyone outside Fort Lowell, and Hondo is able to make the General realize that a victory would be phyrric, tarnishing a still-stellar record.  Any loss of stature from his capture by Ponce is all in Rutledge's mind.  It's too bad MacGraw wasn't given steadier writing to work with--as it is, his performance still makes Hondo and the Savage worthwhile. 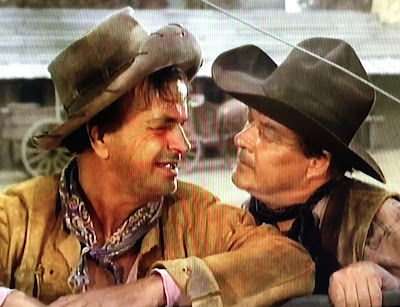 The softening of Emberato's temper doesn't mean we lack fisticuffs.  He and Ponce are getting the best of drunken ne'er-do-wells Sand and Dink when the fight is stopped by troopers.  Later, Hondo gets to finish the job with one punch in the saloon.

For once, Hondo's one-punch knockout of Dink causes no property damage.  Chase must have been determined to avoid every audience expectation.


AN UNCOMMON EPISODE IN ONE MORE WAY:

Taeger keeps his shirt on for once, but MacGraw doesn't. See above. 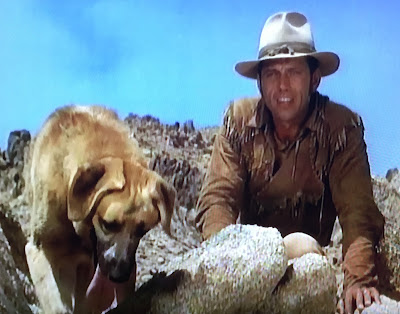 Sam is merely a spectator in the teaser, and M.I.A. for the rest of the installment. As is always the case when this happens, the scene stealing canine is missed.

Hondo has a wedding band on his left hand (see picture above); this was the first episode filmed after Ralph Taeger's July 1967 wedding.

Propelled by a game performance by MacGraw and solid direction from Moore, who builds some genuine tension.  Ponce's punishment is as cringe-worthy as it could be on prime time circa 1967, and check out Hondo's realization that he's hearing the Apache Death Chant when he arrives to retrieve the General.  Lane trusts Colorados, but his uneasiness is palpable.  Unfortunately Chase stacks the deck too much, somewhat spoiling this interesting variation on FORT APACHE.  The ensuing Hondo and the War Hawks provided a more nuanced exploration of similar themes.  (**1/2 out of four)


HONDO: THE COMPLETE SERIES is currently streaming at Warner Archive Instant and the series also airs every Saturday afternoon at 3:30 PM Central on getTV.
Posted by Hal at 4:59 AM