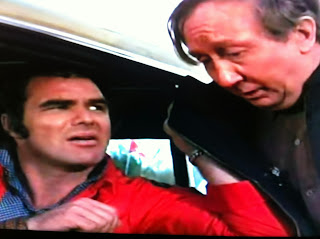 Reynolds is a conman living in his '55 Olds, supporting himself in between scams by robbing gas stations owned by Southland Oil Services, specifically targeted due to Burt's personal vendetta against the company.  During an escape from his latest stickup, Burt ducks into a dance and soon finds himself managing the band onstage, the Dixie Dancekings.  Reynolds finds he has a true talent for his new 'legitimate' gig, but in order to procure the funds to get the band to Nashville, he'll have to fall back on his old habits from time to time.  Meanwhile, S.O.S. CEO Lloyd persuades his ex-cop brother Carney to come out of retirement to track down the serial robber. 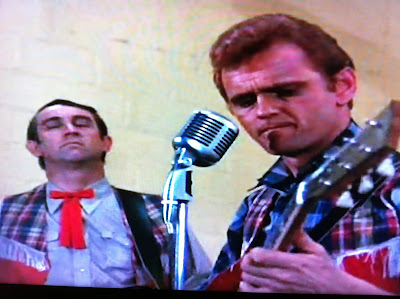 Curiously all but forgotten today, at first glance W.W. AND THE DIXIE DANCEKINGS is the quintessential 1970's Burt Reynolds vehicle.  It's set in Georgia and Tennessee, with frequent Reynolds co-stars Reed, Hampton (THE LONGEST YARD), Beatty (DELIVERANCE) and country music superstars Williams and Tillis.  In a neat anticipation of SMOKEY AND THE BANDIT, a Honeymooner pursues Reynolds and Reed throughout the South.  Granted, Carney is considerably more pious (and more competent) here than Buford T. Justice could ever be.  When we meet him, he's a Deacon who gave up police work because it interfered with the Lord's work. 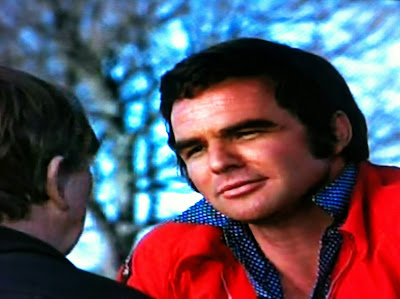 DANCEKINGS is definitely lightweight: the screenplay by Thomas Rickman (COAL MINER'S DAUGHTER) is long on contrivances and short on believable tension, fun but never coming close to the heights of the first BANDIT installment.  Still, as directed by the disciplined John G. Avildsen, the film never threatens to become one of the "home movies" that would eventually eclipse Reynolds' star in the Eighties.  Comedy was never Avildsen's specialty (i.e. NEIGHBORS) but he helps maintain the levity (though he does overuse the clever "wipes" a bit) without allowing the self-indulgence that would mar Reynolds' post-HOOPER collaborations with director Hal Needham (who coordinated the stunts for W.W. and also plays a cop in pursuit). 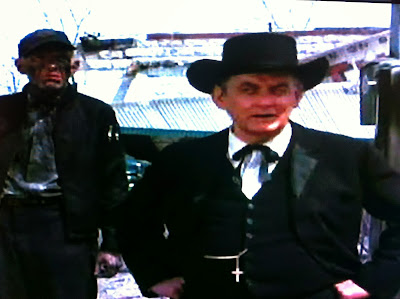 It's Burt's W.W. who is by far the most well-rounded character, but his many interesting quirks are mostly touched on, with few fully explored.  He idolizes Errol Flynn, surely thinking that Robin Hood himself would approve of the Southland Oil Service robberies.  (Side note: Since DANCEKINGS is a Fox product, it's THE SUN ALSO RISES rather than Warner-era HOOD that Burt watches early and quotes later.)  While Reynolds is a disgruntled former S.O.S. employee, no specific  "breaking point" is ever identified, and his Korean War service (assuming he's truthful about that) is glossed over quickly after coming in handy in one scene.  Charm and baffling with bullshit turn out to be his specialties, but Burt does show a chivalrous side when Van Dyke's honor seems threatened by a sequin-suited Beatty and also chooses the band he's grown fond of over the car he passionately loves.

Aside from that meeting with Beatty, the romance between Reynolds and Van Dyke isn't very convincing, but DANCEKINGS comes alive when Burt is pitted against the skeptical Reed and perpetually long-faced Williams.  Particularly the former: Reed's character is a bit of a hothead, and Reynolds is slowly usurping control of the band from him.  Their scenes together carry more zing than the rest of the film's conflicts (Reynolds-Beatty, Reynolds-Carney, etc.), with the chemistry that would later drive GATOR and the BANDIT trilogy established immediately here. 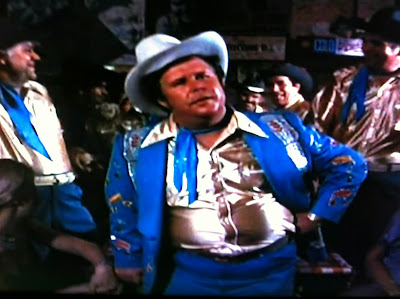 W.W. AND THE DIXIE DANCEKINGS is definitely a grab bag.  Scenes with the stone-faced Carney are almost jarring in contrast with the rest of this lighthearted romp, and one never feels fully invested in the outcome due to a lack of suspense.  It all dovetails together way too neatly, and given what we know immediately about Carney, it's beyond puzzling why he would choose Saturday night to spring a trap.  The film is still a rollicking hour and a half anyway, albeit one that won't be remembered for long after it ends.   It was a popular rerun during the respective heydays for Burt Reynolds and southern car chase chic (circa 1977-1982) but pretty much disappeared from view in favor of Burt's higher profile hits once each novelty faded.

"Fun but unmemorable" was rarely enough to stop Burt from reaching DVD in his other adventures (ROUGH CUT is an exception, I know), so I can only conclude that it's because he went without the 'stache for this one. 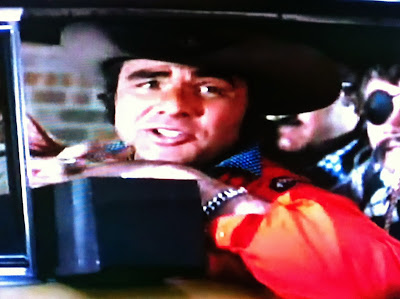 Hey, it's professionally made, with plenty of easy jollies.  In addition to the always welcome opportunity to visit Burt and friends in a chicken-fried setting, there's Jerry Reed's guitar work (he also sings "Johnny B. Goode") and Art Carney's lesser-known pursuit of our charming erstwhile Bandit.  Considerably more entertaining than resume-tarnishers like SMOKEY AND THE BANDIT 2 and STROKER ACE, W.W. AND THE DIXIE DANCEKINGS is a welcome discovery for fans of the Burt Reynolds canon and/or Seventies drive-in entertainment.

It's kind of a shame that this film didn't have more of an impact.  Imagine a sequel, or even a SMOKEY installment, with Carney and Gleason teaming up to chase Burt.  With Deacon Carney getting irritated by Gleason's swearing and ineptitude in equal measure!  Hey, a man can dream, can't he?

W.W. AND THE DIXIE DANCEKINGS airs occasionally on Fox Movie Channel.
Posted by Hal at 1:14 AM

Hal, I think this is one of Burt's best films from the 1970s. Yes, it's lightweight, but very entertaining if viewed in the right frame of mind. Of course, maybe I'm just attracted to Southern tales of musicians and the law...I'm also a fan of Peter Fonda's OUTLAW BLUES.

Not totally forgotten. I watched this flick with my dad when I was a kid, and for some odd reason I remembered that time together this morning (my dad passed away in 1999). The memory put a smile on my face. Now that we have the internet I was able to Google it up and take a little trip down memory lane, and that brought me to your blog.

Admittedly not the best movie ever made, but nonetheless it had a certain charm and is a pleasant part of my memories.