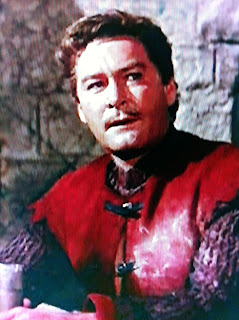 Hordern is King Edward III of England and his son Flynn is the Prince of Wales, with the father leaving his son in charge of Aquitaine after leading the English Army to victory there during the Hundred Years' War.  The Finch-led French noblemen outwardly accept a truce, but secretly rebuild, vowing revenge as Flynn eases the tax burden on their former subjects.  After their assassination attempt on Errol fails, the Frenchmen are successful in kidnapping his lady Dru.  The erstwhile Robin Hood is seperated from his army and goes undercover to infiltrate Finch's forces as a precursor to going medieval on 'em to save his intended Princess. 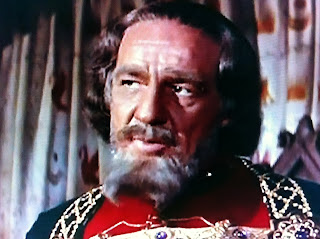 Beautifully photographed but slow developing, THE WARRIORS turned out to be Flynn's swan song as a swashbuckler.  Forty-six at the time, Flynn looks long in the tooth for the proceedings and was actually two years older than his film father Hordern (who appeared to be fifty years old for a good quarter century).  You'll see faint echoes of earlier triumphs (i.e. swordplay sharing more than a little choreography with that of ROBIN HOOD) but sadly, Flynn was no longer physically able to handle much of his own fencing.  That's two-time Olympian Raymond Paul doing the bulk of the dueling with the soon-to-be famous Christopher Lee. 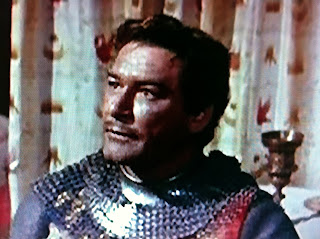 This Flynn vehicle's chief asset is a thoroughly impressive supporting cast.  Finch gives an especially vigorous performance, bringing much more energy to the table than Flynn could by 1955.  Basil Rathbone would certainly approve.  Lee, who was uncredited(!), did much of his own fencing and suffered a permanent injury to his pinky finger as a result.  In addition to these stalwarts and the always venerable Hordern, a very young (and like Lee, uncredited) Patrick McGoohan is noticeable among Errol's subordinates. 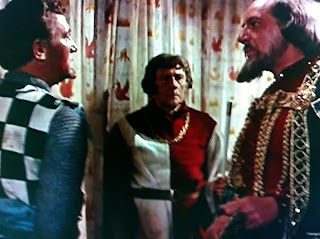 This actioneer doesn't skimp on the eye candy either.  Dru is beautiful, if uninspired here.  She's actually eclipsed by Yvonne Furneaux (Flynn's THE MASTER OF BALLANTRAE) who catches everyone's eye while she sings a bawdy song at a tavern.  One gets the impression that Flynn might have preferred her to Dru; I'd imagine more than a few viewers did. 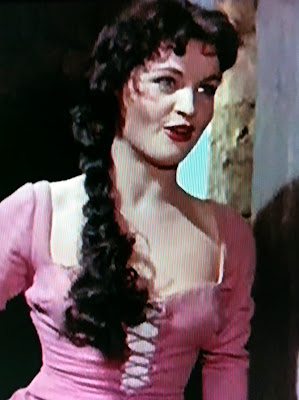 While BALLANTRAE would have been a better way for Flynn to bow out of the genre, THE WARRIORS is a pleasing enough popcorn movie once Flynn is left in charge and angers the already perturbed noblemen by respecting the poor.  Errol is going through some very familiar paces but he has some well above average support in doing so. 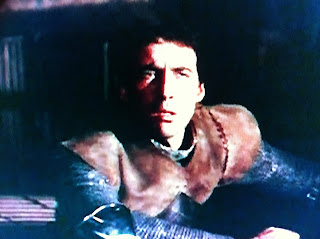 Flynn's latter day features from his post-Warner Brothers period (1953-59) have been particularly slow to arrive to DVD, and while DARK AVENGER performed well at the U.K. box office, it flopped in North America as THE WARRIORS.

Speaking of the alternate title in the U.S., it certainly doesn't help the film's profile there today to share its name with Walter Hill's 1979 cult classic. 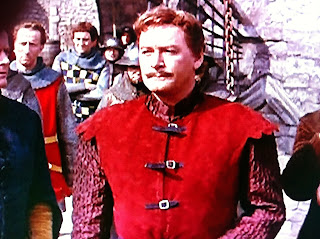 Hey, he might be weathered here, but it's still Errol Freaking Flynn in a swashbuckler with handsome production values and a great supporting cast led by Howard Beale himself.  It might not be THE ADVENTURES OF ROBIN HOOD, but what is?  THE WARRIORS turns up about once a year on Turner Classic Movies.

Wow, haven't heard of this one! Astonishing that there are still Errol Flynn films out there not yet on DVD.

I rather like THE WARRIORS. You're right about it being slow to start and Errol does look a bit tired. Still, the villain is a good one, Ms. Dru is lovely (and I do like her in the part), and the climax is lively.