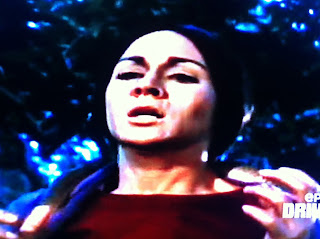 During World War II, Nurse Clark and a colleague are searching for herbs to use as remedies in a cave in the Philippines.  Clark is bitten by a distinctively marked cobra and forms a deep, symbiotic bond with the cobra that keeps her from aging over the next thirty years.  Bang arrives at that time to assist zoologist Silayan in venom research, bringing along boyfriend Garrett and his pet eagle(!) Dirk.  Sultry Clark makes Garrett her latest mate, causing him to age rapidly and motivating Bang to step up the research to save him. 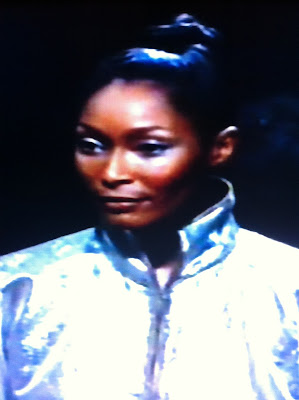 Meyer, directing his second (and last) feature, also wrote and produced NIGHT OF THE COBRA WOMAN and acted in a small role.  Too many hats, no doubt.  He especially could have used help with the script.  Not only is the dialogue laughable, but Meyer isn't even able to sustain consistency of character or situation from one sentence to the next.  Consider the following exchange between Bang and Silayan (delivered very flatly and breathlessly by Bang) while a poor monkey bears the brunt of their research:

BANG: Can't we give her the venom right away Doctor?  I can't stand looking at her like this any more!
SILAYAN: I want to watch how much further her condition develops.  Listen, I got a meeting in the main building.  Will you stay and watch her?
BANG: Sure!  Is it all right if I run out and get some lunch?  I'll be right back.
SILAYAN: Okay.

It would take a terrific actress to make this work, and Bang ain't it.  She looks pretty inviting in one early scene in bed--- 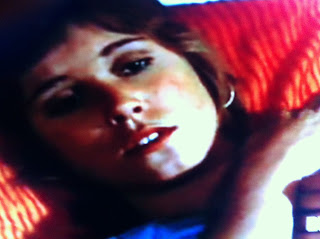 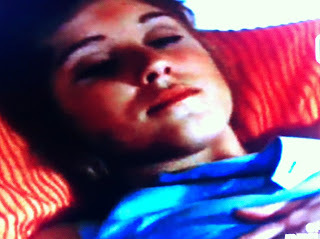 But outside of this kinda-sexy interlude she is completely wooden in the rest of the flick, even when frustrated, "strenously objecting" (like the exchange above) or attempting to project fear or danger.

Beanpole Garrett also lacks screen presence, which makes the "love triangle" implausible.  Yeah, I know, Clark needs a steady supply of young men to keep the venom flowing, but it appears there's plenty of them right there in the Philippines for her.  Even if Garrett is "exotic" to her, he comes across as far short of studly.  Watching NIGHT OF THE COBRA WOMAN makes it obvious why neither Bang nor Garrett had a lengthy career onscreen. 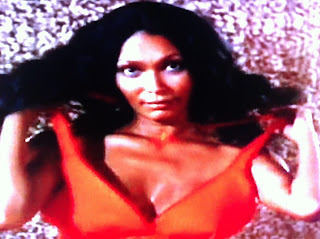 Also unclear is how lethal Clark's venom is.  It is fatal for the young Filipino men she lures into her bed, but strangely didn't kill Diaz (who is introduced to us as a rapist in the opening scene) or Garrett.  While Diaz ended up pathetically deformed, he didn't pledge his undying love like Garrett and the other conquests.  In fact, he wants revenge.  Does the effect depend on her feelings?  Theirs?  The toxin dose?  Is the length of copulation a factor?  Just some of the many things Meyer fails to clarify.

In all the confusion, the saving grace is Marlene Clark, who singlehandedly provides the vavavoom factor by getting naked frequently and also spending a considerable amount of time in her underwear. 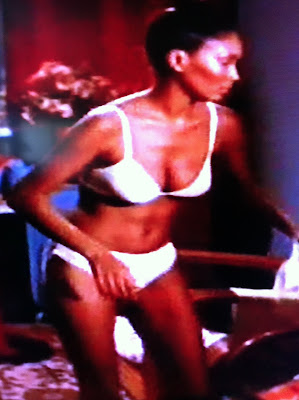 Usually a very reliable actress, Clark is surprisingly as stiff as her co-stars much of the time.  Yes, she's supposed to be reserved after her transformation, but her delivery is just as leaden in the scene before she experiences love at first bite.  Give her props, though.  She's burdened with the bulk of the exposition, shows commitment to the absurd material, and is damned stunning even when she's shedding her skin (which happens after each tryst, apparently).  Clark also generates a few unintentional giggles of her own during a "fight to the death" between her cobra and Garrett's falcon.  Fortunately, she received a much better opportunity in the horror genre with the following year's GANJA AND HESS, one she seized impressively. 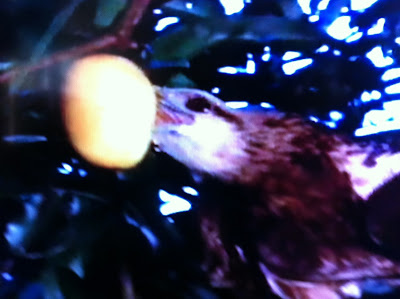 Delivers less than it promises and is sloppily made even for an exploitation flick.  For all the jollies everyone gets at Joy Bang's screen name, her work in NIGHT OF THE COBRA WOMAN makes you understand that it wasn't her moniker that kept her from becoming a leading lady.

Bad movie fans will still find some laughs, just not as many as they will find in other, better (worse?) camp classics.  It is certainly a must for Marlene Clark fans and she is always a welcome presence, clothed or not.  NIGHT OF THE COBRA WOMAN is now streaming at Netflix Instant and has recently been airing on Epix Drive-In channel as well.