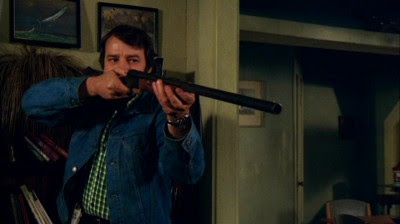 I should probably just re-name Missing No More and call it The Warner Archive post label at this point, since it seems like every time former Horn Section reviews bow on DVD, it's the good folks over at WA making it happen.  This month we highlight a couple of action packed curios from the Seventies.  One is a blaxploitation crime drama, the other a "man against nature" horror film.  Each drive-in fave is headlined by one of the sturdiest leading men of the Me decade.

THE PACK (1977) stars Joe Don Baker as a marine biologist (!) who learned from the equally rugged Forrest Tucker (THE CRAWLING EYE) how to look scholarly for these brainy (but still brawny) roles: wear glasses from time to time!  As I noted in the review it doesn't really work as horror because collies and dalmations ain't all that terrifying.  However, Robert Clouse (ENTER THE DRAGON) wrote and directed a film that is still well worthy of applause.

Clouse's screenplay features effectively drawn characters, underappreciated actors (beginning with Baker, who did get several action leads in the wake of WALKING TALL) and above all a needed but not preachy reminder about responsible pet ownership.  While the Dalmation might not be a very scary breed, if you're familiar with its history as a pet, it is particulaly well-suited to that last message.  Unfortunately untold numbers of Dalmations suffered in the wake of 101 DALMATIONS, ending up abandoned by owners who, while well-meaning, weren't prepared for ownership of the high-energy spotted canines.

THE PACK is newly remastered by Warner Archive but available in the U.S. only per the link.  Myself, I prefer it to CUJO, its only real competition in the "killer dog" subgenre.  Unless you want to count the masked Afghans in 1959's THE KILLER SHREWS, that is. 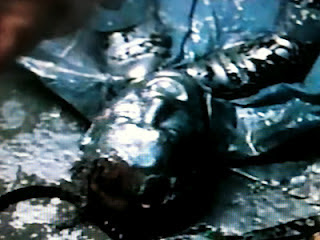 THE SLAMS (1973), which was just reviewed here in early February, sends Jim Brown to prison.  In a case of "ask and ye shall receive", Warner Archive put it out a month later as one of four Jim Brown releases.

Since the review should still be fresh in your mind, there's not much to add.  Frank de Kova (as a mafia kingpin), Ted Cassidy (as his racist henchman) and Judy Pace (as...Hell, does it matter?  She's Judy Pace!) are Brown's co-stars in this combination prison/caper film.  All four Jim Brown films are newly remastered.


Along with THE SLAMS, fans will certainly want to check out THE SPLIT (1968), one of the other new releases.  The cast....well, all I can say is "wow": Jack Klugman (the Big Q himself!), Diahann Carroll (SISTER, SISTER), Warren Oates (BARQUERO), Ernest Borgnine, Gene Hackman and James Whitmore.