Welcome to The Horn Section's contribution to The Dick Van Dyke Show blog-a-thon, celebrating the show's 50th Anniversary today and hosted by Ivan Shreve's Thrilling Days of Yesteryear.  If you haven't checked out Mr. Shreve's blog yet, by all means do so--he offers an incredible wealth of information on classic film, television and radio.  I could single out examples, but it would make this intro to the post prohibitively lengthy, so just check out Thrilling Days at your convenience and you'll see what I mean.


And now, without further ado, our feature presentation, which also serves as the latest edition of...... 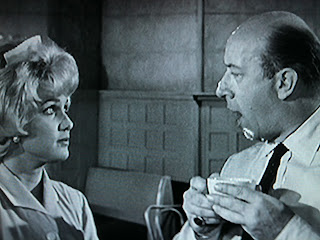 
Amsterdam, Marie and Jones work together in Deacon's diner, which is under surveillance by Soviet spies who are convinced that a "traitor" cosmonaut is hiding out there, since the defector is Amsterdam's doppelganger.  After Deacon is on the receiving end of slapstick incompetence on his birthday, he fires all three employees, and they move on to work at a bookstore Jones has inherited.  The foreign operatives trail them--and counterspies, robbers and beatniks end up tagging along as the communists attempt to apprehend Amsterdam for "Mr. Big" Heller.


I first became acquainted with THE DICK VAN DYKE SHOW in daily syndication as a child of the '70's.  From the beginning, my favorite character was Buddy Sorrell, Rob Petrie's slightly sardonic, constantly wisecracking co-worker that Carl Reiner loosely based on his long-time collaborator Mel Brooks. Reiner cast Morey Amsterdam as Sorrell, and the character subsequently lived up to the veteran comic's real-life nickname, "The Human Joke Machine". 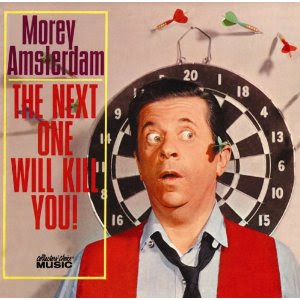 A skilled cellist and songwriter whose credits included "Why Oh Why Did I Ever Leave Wyoming" and "Rum and Coca-Cola", Amsterdam was also a standup comedian, author and frequent host on radio and TV.  He was ubiquitous in the latter medium's infancy, starring in his own self-titled series (on Dumont) and for a time hosting NBC's earliest version of THE TONIGHT SHOW, BROADWAY OPEN HOUSE.  At the time that VAN DYKE began its five-year run, Amsterdam was coming off his first dramatic feature role in MURDER, INC.  During the show's run, he further boosted his silver screen profile with the recurring role of Cappy in the A.I.P. BEACH PARTY films and recorded several comedy LP's.

These projects had given Amsterdam (then in his mid-50's) his greatest visibility to date, and during the hiatus preceding VAN DYKE's fifth and final season in 1965, the comic furthered his reputation as a jack of all trades by adding producer and screenwriter to his resume with DON'T WORRY, WE'LL THINK OF A TITLE.   The very first thing we see is the caricature of the star from his early TV ads:

Dick Van Dyke and Mary Tyler Moore didn't join Amsterdam on his summer vacation, but Rose Marie and Richard Deacon signed on as co-stars and Carl Reiner joined much of TV Land in contributing a cameo.  We've all seen the usual results when the supporting players from a legendary TV classic get together to put on a show without the leads--think SANFORD ARMS or AFTERMASH, only this time on the big screen and for three times the running length.  I'd love to tell you that ever-likable renaissance man Amsterdam bucked the "second banana curse" and triumphed in yet another field with an undiscovered cinematic treasure, but I can't.  There's no way to sugarcoat it:  DON'T WORRY, WE'LL THINK OF A TITLE is very poorly written and executed.


A spy spoof ("James Bond" even voice-cameos via phone) by way of vaudeville wasn't a bad idea when DON'T WORRY was filmed in the summer of '65, and few people could rival Amsterdam's encyclopedic recall of jokes--his nightclub act was centered around it.  Henny Youngman and perhaps Milton Berle (who cameos here) would have been the only people in the same ballpark.  Unfortunately Amsterdam filled his screenplay to the brim with the oldest ones he knew.  Literally.  They had to be:

"I was up all night trying to get my window open."
"There's no window in that room!"
"No wonder I couldn't get it open."

"Why are you pulling that piece of rope?"
"Y'ever try pushing one?"


Amsterdam's film ended up delayed for over a year and barely released in 1966 after VAN DYKE had ended its run.  By then GET SMART! had already spoofed the genre definitively for the target audience, even beating DON'T WORRY to the punchline of "Mr. Big" being played by a little person (Heller in this film, Michael Dunn in SMART!).  Too bad, because the screenplay needed a surprise or two.


Amsterdam, Marie and Deacon all take the opportunity to break the fourth wall.  Repeatedly in Marie's case, and Deacon lets us know that he realizes he was playing a different role earlier in the picture.  If Amsterdam was striving for a HELLZAPOPPIN' feel, he didn't succeed in making his film anywhere close to zany enough.  If he was attempting a straight spy spoof, he didn't have the budget or collaborators.  Harmon Jones had never directed a comedy before (unless GORILLA AT LARGE counts); January Jones (related to the director?) is "introduced" with a key role, but exhibits no comic timing or acting ability and even appears uncomfortable on camera.  With maybe four sets to work with and a distinct lack of any espionage staples to tweak, DON'T WORRY has the look and feel of a lazy home movie, coming across like Morey Amsterdam and friends dabbling in movie making instead of having a truly inspired idea for a motion picture.

While it may not be funny or well-made, it is a veritable treasure chest of celebrity cameos.  The production costs may not have allowed for any elaborate action or comedy setpieces, but lots of recognizable names and faces were willing to join in on the fun.  For example, Moe Howard, who unfortunately didn't bring Larry or Curley-Joe with him:


Irene Ryan (THE BEVERLY HILLBILLIES) borrowed the Clampett truckster from Jethro to give our two leads a lift.  Milton Berle (probably paying Morey back for a stolen joke) got the hoary aforementioned "rope" gag.  Danny Thomas ordered a meal at the diner and Steve Allen dropped by the bookstore.  Cliff Arquette joined his HOLLYWOOD SQUARES co-panelists, with no lines and two seconds of screen time, but distinctively playing Charley Weaver. 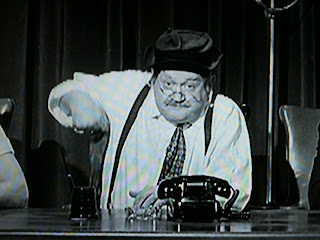 And, just to show you how persuasive Morey Amsterdam was back in the day, he even convinced The Greatest Actor Who Ever Lived to donate about a half hour of his time:

Everything including the kitchen sink is thrown in, but to no avail: DON'T WORRY, WE'LL THINK OF A TITLE was barely a blip at the box office in 1966 and would be Amsterdam's only feature production credit and only screenplay.  He, Marie and Deacon went back to television, where they all remained welcome guest stars and game show panelists, with regular gigs on MATCH GAME, HOLLYWOOD SQUARES and THE MOTHERS-IN-LAW respectively.

It more or less vanished after barely being released in 1966, and never even received a VHS release. Until well into the 2000's few had even heard of it.  But TCM dusted it off a years ago, Netflix Instant added it in 2010 and now----MGM Archives has it available for pre-order.  So....on October 11th, according to this link--it will be! 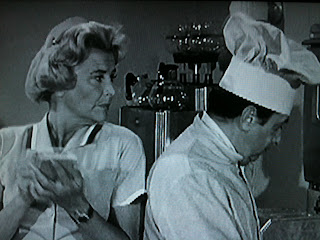 It might not be a good movie, but it is a genuine artifact of its television era, and it does give three beloved character actors a moment in the spotlight.  I'd say it's a must for DICK VAN DYKE SHOW fans to see at least once and any fan of 1960's television will probably find it worth a look as well.

As mentioned above, DON'T WORRY, WE'LL THINK OF A TITLE is available on Netflix Instant if you'd like to give it a look before shelling out the $19.95.
Posted by Hal at 12:56 AM

Sounds like a fascinatingly awful film - might even give it a whirl. There were so many spy spoofs out in the 60s, in the wake of James Bond, that maybe Morey should have picked another theme to spoof, such as rock 'n roll or teenagers (oh right, he did that in the Beach Party films). Great post!

It's difficult admitting that I've not seen this film but if it ever turns up again on TCM I might seek it out...with that many star cameos it's got to be of some interest. I'm most appreciative of your contribution, good Sir Hal...chiefly because no one else had the intestinal fortitude to write about it (though Peter Nellhaus at Coffee, coffee and more coffee gave the blogathon a shout-out with a few words about the film and some nice screen caps).

Another one of the blogathon contributors mentioned that his favorite sitcom was F Troop -- do you suppose you'd be interested in getting together with him and myself to do a salute when its fiftieth is commemorated in 2015?

Thanks for the input grandold!

Ivan: I am very happy and honored to contribute to the blogathon. And--I am 100% in for a celebration of F TROOP's 50th. I'm also hoping that our dear friend Mr. Storch will be around for that big Centennial I'm planning for him in 2023. :-)

Villa Park police are hunting for three men who robbed a store at gunpoint cheap newport cigarettes online, and escaped with roughly $2,000 in cash and 160 cartons of Newport cigarettes, authorities said Friday.

1-29-15 I just saw this movie on GetTV. I was totally fascinated with all the movie stars that kept "popping up" in it . The story line wasn't so hot, but I did love seeing some of my favorite stars in their cameo roles, something different. It is worth seeing once and maybe even twice.
I had never heard of it before this.

Just watching it on the THIS channel, on 3/15/16, on DVR. A uniquely terrible movie. Love the cameos, and the occasional Yiddish phrase.