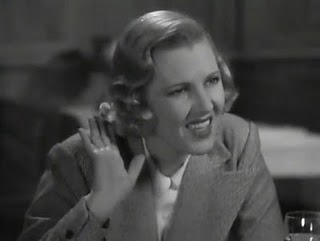 Robinson is "Jonesy", a milquetoast who works at Harvey's accounting firm and has an unrequited crush on co-worker Arthur.  He's such a straight arrow that he not only has zero absences for 8 years, he's never even been late to work.  But Jonesy's attendance record is broken when the incompetent police apprehend him one morning, mistaking him for the town's most notorious criminal Mannion (also Robinson), his doppelganger.  Achieving some measure of celebrity from this coincidence, Jonesy is pursuaded by his boss to begin ghost-writing Mannion's "autobiography", not knowing that the racketeer has learned about his "dead ringer" and plans to frame his mild double for crimes upcoming.

John Ford was known for his westerns, Robinson for his serious mafiosos. These unlikely sources teamed to tweak Robinson's image and gangster films in general, both of which were ripe for ribbing by 1935.  It would be a mistake to say it is all fun and games (it is chilling to realize Jonesy is actually ordering a hit while impersonating Mannion) but any serious undertones are presented very subtly.   Predictably the timid accountant finds his assertive side as his lawless double, and uses this newfound assuredness only to woo Arthur and pursue his dream vacation with her (Shanghai).

Robinson is marvelous in his dual role, and his performances here and in THE MAN WITH TWO FACES (1934) proved the actor was far too talented to be pigeonholed as a gangster.  Arthur's role here was also a breakthrough, as not only the first of her many screwball comedies but her screen debut as a blonde as well, a look she would keep for the rest of her career.  Arthur had been directed by Ford in her very first film a dozen years prior, in the silent CAMEO KIRBY (1923).

Ford was a few months away from the first of his Oscars of (THE INFORMER) and maximizes the script's comic potential while deftly keeping your mind off the wild implausibilities.   Ford does show that even the greatest aren't perfect with one very noticeable continuity goof, as Jonesy should be returning to a flooded apartment after that closeup on the still-running faucet as he leaves.  But yeah, I'm nitpicking.  Three of Hollywood's all time greats teamed up to really put on a show here, and it's another in the TCM rotation that is well worth your DVR space.

Beats me.  It undoubtedly would be if it were Warner's property, but Robinson was on loan to Columbia for this crowd pleaser, and so it remains inexplicably missing, with only a VHS release to date.

Robinson.  Arthur.  Ford.  All in top form, with Eddie G. and the old master doing so while giving their fans a change of pace.  Enough said.  This one richly deserves wider availability.

Loved this film and so did my son! Thanks for the tip. Not usually a fan of Ford comedies...