It is with a very heavy heart that we learn of the passing of Rudy Ray Moore, a.k.a. Dolemite, of diabetes at the age of 81.

He's certainly familiar to those of

us who are big fans of Blowfly. In fact, Rudy Ray's last live appearances in 2006 were co-headlining gigs with Papa Fly and his last recording in 2008, "I Live For the Funk", featured Blowfly and Mr. Moore reprising his Petey Wheatstraw character from the classic 1978 Moore film of the same name.

But if you have a love for the records of Blowfly, Redd Foxx, or Richard Pryor, by all means check out Rudy Ray Moore's recording legacy as well. The LP cover at the bottom of this post is very typical of his output, all originally on Kent Records. Here's a great sampler to start with, but search Amazon further for the rest of his output.

R.I.P. Dolemite. You will be 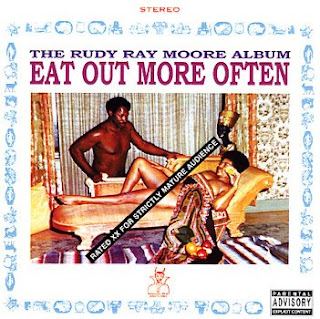