Some DVD love for LOBO, anyone?

"A man of dreams, who guards our things as if they were his own...."


NBC during the 1978-81 Fred Silverman era was notorious for its fiascoes. Spending millions on SUPERTRAIN. Greenlighting the one hit wonder Pink Lady for a variety series. Importing an Australian sitcom notable only for gratuitous nudity, then putting it on the air sans nudity (NUMBER 96). MRS. COLUMBO. HELLO, LARRY. These are the ill-advised, short-lived train wrecks that populate lists of the “Worst TV series of all time”.

But in what I feel is a case of guilt by association, they are often joined on these lists by THE MISADVENTURES OF SHERIFF LOBO, a pretty funny show (for a while, anyway) that simply doesn't deserve that kind of hate. 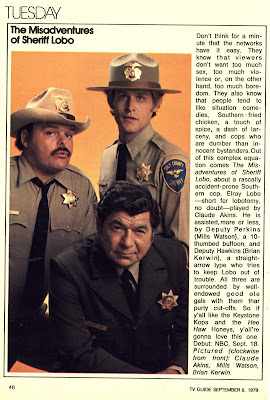 Georgia Sheriff Elroy P. Lobo was a corrupt and menacing bad guy when originally on B.J. AND THE BEAR, but when NBC spun him off into his own series in the wake of CBS' success with THE DUKES OF HAZZARD, he became a rascally money-hungry schemer.  This character switch from tough guy to comic (skillfully played by Claude Akins) allowed the producers to combine the chicken fried SMOKEY AND THE BANDIT knockoffs popular at the time with the tried and true conman humor from classic service sitcoms like SGT. BILKO and McHALE’S NAVY. 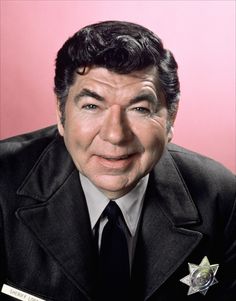 Like BILKO, Sheriff Lobo was stationed in the middle of nowhere (Orly County, Georgia) and his schemes were usually foiled; he’d typically stumble onto a real crime, and have to solve it---often recovering money which he (of course) didn’t get to keep. Like F TROOP’s Sgt. O’Rourke, Lobo also had a not-too-bright assistant (Mills Watson as Deputy Perkins) providing plenty of pratfalls and misunderstandings (in this case, heavier on the former).  Add in more wrecked police cars in Orly County than in Hazzard (yes, really) and plenty of shapely ladies in cutoffs each week and the result was a show that was usually amusing and easy to take. It was about like DUKES would have been if Roscoe had been the main character and as smart as Boss Hogg.


Don’t get me wrong.  SHERIFF LOBO is far from a "lost classic". It was outlandish, slapsticky, silly as Hell. There were episodes involving mechanical sharks, UFO's, "Disco Fever", Larry Storch as a hillbilly patriarch and Dean Martin just passin' through Orly.  Still, was LOBO any sillier than the aforementioned DUKES or the "Super Fonz" era HAPPY DAYS?


As was the case with all of the above, a solid cast helped LOBO.  Claude Akins seemed to be having the time of his life doing knockabout comedy after 30 years of playing tough guy supporting roles. The Akins/Watson comedy team had good chemistry; not on the level of Hale/Denver or Tucker/Storch, but still funny.  Brian Kerwin provided the ladies with a heartthrob (needed if you’re gonna compete for that DUKES audience, right?). 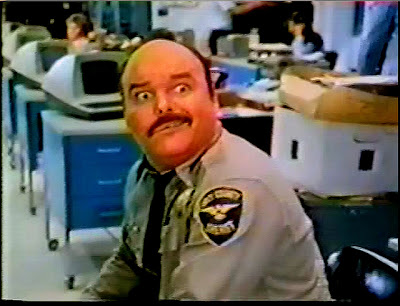 THE MISADVENTURES OF SHERIFF LOBO was a pretty popular show when it originally aired, despite a daunting Nielsen test for survival: Tuesday nights at 8 ET, up against ABC powerhouses HAPPY DAYS and ANGIE, which were both top 5 shows the prior season. LOBO actually made some inroads, knocking HAPPY DAYS from 4th to 16th and ANGIE from 5th to out of the top 25 altogether. LOBO itself was in the top 30 by early October and entrenched as NBC's highest rated new show by the end of that month.  Eventually LOBO became the first NBC series to get renewed in the killer time slot since 1976 (BAA BAA BLACK SHEEP).

Unfortunately, NBC president Fred Silverman and company couldn’t help but screw almost everything up during their Reign of Error. Interviewed by the New York Times in July 1980, Silverman noted that LOBO rated highly in rural areas but not so well in the urban areas. His solution: change the premise, and move the show to Atlanta! 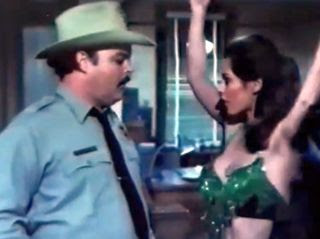 In the second season opener, the Governor visits Orly County, impressed by the “low crime rate” (actually a result of Lobo’s negligence in filing paperwork). The Guv reassigns Lobo, Perkins and Birdie to the Special Crime Task Force in Atlanta. This could have been an amusing season opener, assuming that he eventually recognized their limitations and that everyone ended up back in Orly after a "very special" hour or two in the big city. Unfortunately, it wasn’t. They were now amongst the city slickers for good.

To make matters even worse, the memorable first season opening featuring Frankie Laine’s hilariously earnest theme song and a 10 police car pileup was changed. In season two, each show opens with a montage of the three leads sightseeing in Atlanta while Ray Charles sings “Georgia on my Mind”. Great to hear Ray, sure, but doesn't really set a unique tone for the proceedings the way Laine's theme song did.


Lobo went from a southern Bilko to a country Clouseau (a path that had been taken on prime time much more frequently before), bumbling his way to solving crimes with get rich quick schemes all but forgotten.

Initially, Silverman looked smart: the season's second new segment came in 18th in the Nielsens (for the week ending January 11, 1981; a writer's strike delayed most 1980-81 premieres).  However, the long-term outcome of this network tinkering was predictable: rural Season One viewers began to tune out, and urban viewers who had no interest in LOBO before continued to ignore it. The once-popular show was cancelled just four months later after two seasons and 37 episodes. 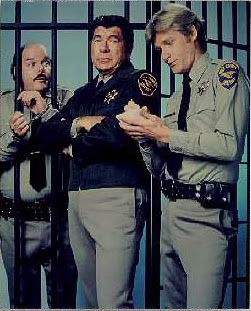 And so, after a few years of sharing a syndication package with B. J. AND THE BEAR, LOBO largely vanished altogether. Meanwhile, all 7 seasons of THE DUKES OF HAZZARD are out on DVD. Episodes of MRS. COLUMBO pop up to tarnish the otherwise excellent COLUMBO season sets. We’ve even seen the complete PINK LADY AND JEFF series released by Rhino!  But no love for LOBO.  No Nick at Nite. No TV Land.  Not a single DVD. 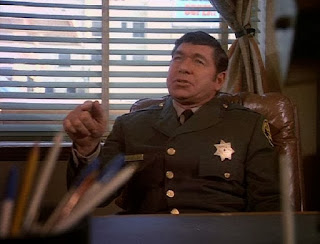 But I digress. THE MISADVENTURES OF SHERIFF LOBO deserves a release of Season One, or at the very least, a single disc "Best of". It’s been ridiculed in print since the day it aired, but I defy anyone to put on a first season installment and not laugh at least a little. It is far from one of TV's all time worst, and after three decades, it's time to stop calling it that.  Put LOBO out in time for the 30th anniversary already---if SMOKEY AND THE BANDIT 3 and STROKER ACE are available, then LOBO damn well ought to be.

NBC (or someone) also changed the title to the less dynamic LOBO for Season 2. It's easy to forget that this show was actually something of a hit. I don't know, Hal, you're making it sound a lot more interesting than I recall (and I watched it purt'near every week). I'll let you know when I get there.

Very insightful comments. I was a 'Sheriff Lobo' fan from 1979 to 1981 (and still am), and I was baffled by the critics' hatred.
You're exactly right when you call it "guilt by association." Critics were gunning for Fred Silverman and everything he did at NBC. Shows like "Sheriff Lobo" and "Hello Larry" (which really isn't that bad a show) just got caught in the crossfire.
Here's one thing you might find interesting: Lobo's ratings actually improved in its second season. I was surprised myself. I found ratings information in a couple of old Reader's Digest almanacs. In the '79-'80 season, Lobo was 50th. In the '80-'81 season, it was 36th. In terms of ratings, Silverman might have been right about moving the show to Atlanta. But in terms of quality, I agree with the consensus that the show went downhill.
Still, I wonder why NBC cancelled it in 1981? For NBC, a distant third at the time, 36th place isn't bad -- especially against 'Happy Days'.
Just a few thoughts.

Actually, someone does have some love for Lobo---Retro Television Network. Where I am, Lobo airs Sundays most of the time at 5 pm (ET), last I looked.

Hal,
I loved the show: Both seasons but thought the first season’s format in Orly fit the characters best. I write NBCUNIVERSAL requesting the show for DVD release.
I really appreciated your comments and analysis of the show, Hal.

Mr. Horn:
It would appear 'Lobo' started strong in the fall of '79, exceeding expectations, and giving 'Happy Days' an unexpected jolt.
But it also appears 'Lobo' lost some steam the second half of its first season.
Do you have any weekly ratings information about the show?
Great blog.

Hi, Tobin, and thanks!

I believe your recollection is correct. At mid-season, CBS entered the fray by moving THE WHITE SHADOW into the time slot, replacing the uncompetitive CALIFORNIA FEVER with a show that had steady, if unspectacular ratings. HAPPY DAYS stayed in the top 20, and SHADOW cut into LOBO's audience more than the more entrenched HAPPY DAYS.

I'll try to find some weekly ratings from the season's second half; I can't recall LOBO cracking the top 20 in the winter and spring of 1980 like it had in the fall of 1979 a handful of times.

One more thing, Mr. Horn: I mentioned this in a long-ago comment, but it bears repeating. Why on Earth did NBC cancel this show in the spring of 1981?

I agree with you; the show declined in quality when it moved from Orly County to Atlanta. But nonetheless, it did go up in the ratings. It was 36th during the '80-'81 season, and was within striking distance of the slumping, post-Ron Howard HAPPY DAYS.

NBC was in third place; it had very few hit shows. It seems like it would want to hang on to a show in 36th place. This reminds me of the baffling decision (which you've written about) to take F TROOP off the air in 1967.

I've seen the claim that Fred Silverman simply didn't like producer Glen A. Larson, and that led Silverman to cancel LOBO and B.J. AND THE BEAR, two shows with ratings that ordinarily would merit renewal.

I think LOBO was doomed once Silverman left NBC (Spring of 1981), even if the ratings had been better, since the new regime wanted an "image change". BRET MAVERICK had a solid showing in the time slot the following year (34th out of 105 shows for the 1981-82 season) but itself was inexplicably cancelled at the last minute. It too seemed poised for a longer run.

Oh, and thanks for the kind words on the Horn Section, Tobin!