John Belushi is a Lester Burnhamesque suburbanite and Kathryn Walker is his chain-smoking and equally unhappy wife. Enter the much younger, mysterious and uninhibited new neighbors Dan Aykroyd and Cathy Moriarty. Aykroyd reduces both Walker and Belushi’s teenage daughter Lauren-Marie Taylor into giggly schoolgirls within hours. Meanwhile Moriarty toys with Belushi and does more than just toy with Walker (“You should have slipped it through the mail slot while you had the chance, Earl!”). Belushi faces gunfire in his front yard, nearly drowns in quicksand, sees his prized collectibles destroyed, and gets roughed up by 65 year old Tim Kazurinsky over the course of a nightmarish 24 hours, but also slowly realizes (like the aforementioned Mr. Burnham) just how dull his life has become, and how dysfunctional his family life really is.

Belushi and Aykroyd played against type in their third and final film together, with Belushi playing the man in the grey flannel suit and Aykroyd (sporting a dye job, gold tooth and contact lenses) the much younger and wilder new neighbor. Belushi accurately conveys Earl Keese’s discomfort and timidity throughout but unfortunately looks at least ten years too young to play Keese (in his late forties in the Berger novel). He’s bettered by Aykroyd, clearly relishing the chance to really cut loose for the first time on the big screen after playing the stoic, deadpan Elwood Blues in his prior film. Best of all is Moriarty; she is every bit the seductress the role calls for, and gets some choice lines (“I was real friendly with a boy named Earl once. Well, twice, really”).

One of the common criticisms of this box office bomb is that director John G. Avildsen had no flair for the genre.  In fact, Avildsen started his career a decade earlier with the uneven free love comedy GUESS WHAT WE LEARNED IN SCHOOL TODAY? (1971) and the much racier and often hilarious CRY UNCLE (also 1971) in which Avildsen dared to mine laughs from necrophilia and to show simulated fellatio and full frontal nudity from Allen Garfield (!), with frequently side-splitting results. So the notion that Avildsen did not have the comedic background to bring the Berger novel to black-comedy fruition is false. 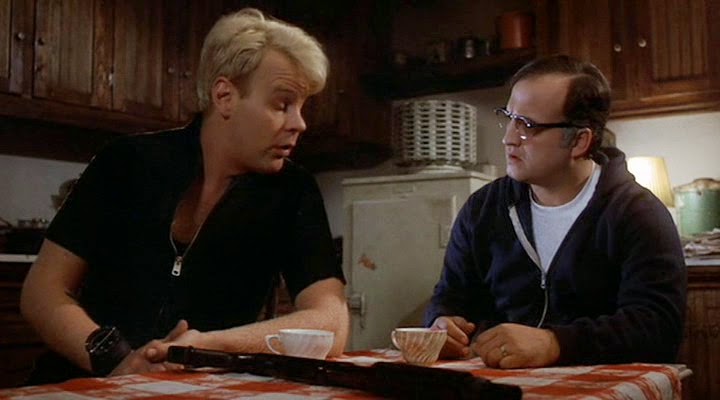 Unfortunately, stating that by 1981 Avildsen was wrong for this material is probably correct. By that time he was settling in as the go-to guy for the uplifting formula sports film (ROCKY, the KARATE KID trilogy) and had not directed an outright comedy in a decade. Whatever touch Avildsen had for dark humor a decade before seems gone: the tone is all wrong.  Rather than establish a numbing reality with two very bored people (like the book), we get ersatz “weird comedy” music, a neighborhood that looks more deserted and creepy than suburban, and Belushi and Walker looking and acting like hermits before the entrance of Vic and Ramona. With the unsubtle approach taken, their arrival isn't anywhere near the jolt it should be; rather than shaking things up, they're just adding to the strangeness.

Studio interference certainly didn't help the director.  After a soundtrack by Blues Brothers saxophonist Tom Scott was nixed after poor test screenings, Avildsen hired Bill Conti from ROCKY who composed a cartoonish score wholly inappropriate for what is supposed to be a biting black comedy. The original idea of using stock music from old horror and science fiction films would have actually worked better IMO.  Conti’s music kills more laughs than any other soundtrack I can think of.

NEIGHBORS does have its very funny moments (in particular, the spaghetti dinner and Belushi and Aykroyd bonding over a cup of coffee) and a loyal cult following today, but is ultimately an interesting failure. Avildsen has yet to try to recapture his black-comedy youth again: it’s been all dramas (FOR KEEPS, A NIGHT IN HEAVEN) and uplifting sports films (8 SECONDS) for 25 years and counting.

I’m far from the first to suggest Avildsen was the wrong director for this film. Belushi reportedly wanted John Landis to replace him, and Newsweek reviewer David Ansen suggested Roman Polanski would have been ideal (if unrealistic). I have two candidates of my own: Carl Reiner and Arthur Hiller.  Reiner worked very well with Steve Martin in a number of films, and delivered the cinematic goods on WHERE’S POPPA?, a novel arguably even darker than NEIGHBORS (of note: both novels had an ending considered too strong and thus changed for the film version).  Hiller got great results pairing Gene Wilder and Richard Pryor (SILVER STREAK) and Peter Falk and Alan Arkin (the fantastic 1979 version of THE IN-LAWS) and did well with another comedy of nightmares in a New York setting, THE OUT OF TOWNERS. 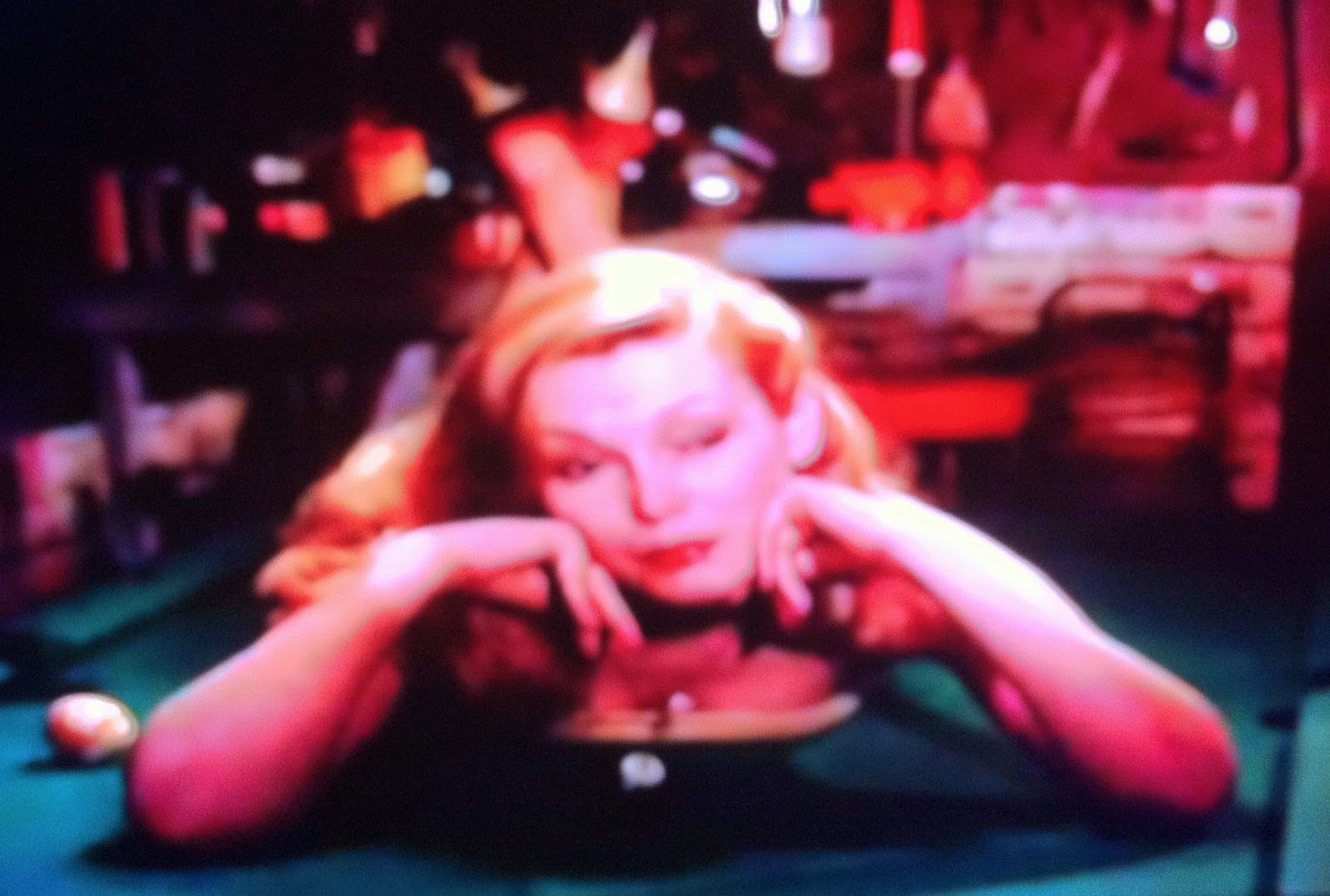 
The subpar box office performance, which some attribute to John Belushi’s atypical role. The theory goes that his fans prefer to see him dishing it out instead of being the human piñata that he is for much of NEIGHBORS.

Though it has its moments, the film is very disappointing given the teaming of Belushi and Aykroyd and a script from Larry Gelbart. The more optimistic ending was only the beginning of the watering down of Berger's darkly satirical novel.

That music score. I have to say it again, God, does it suck. If you had no music at all the film would work better. 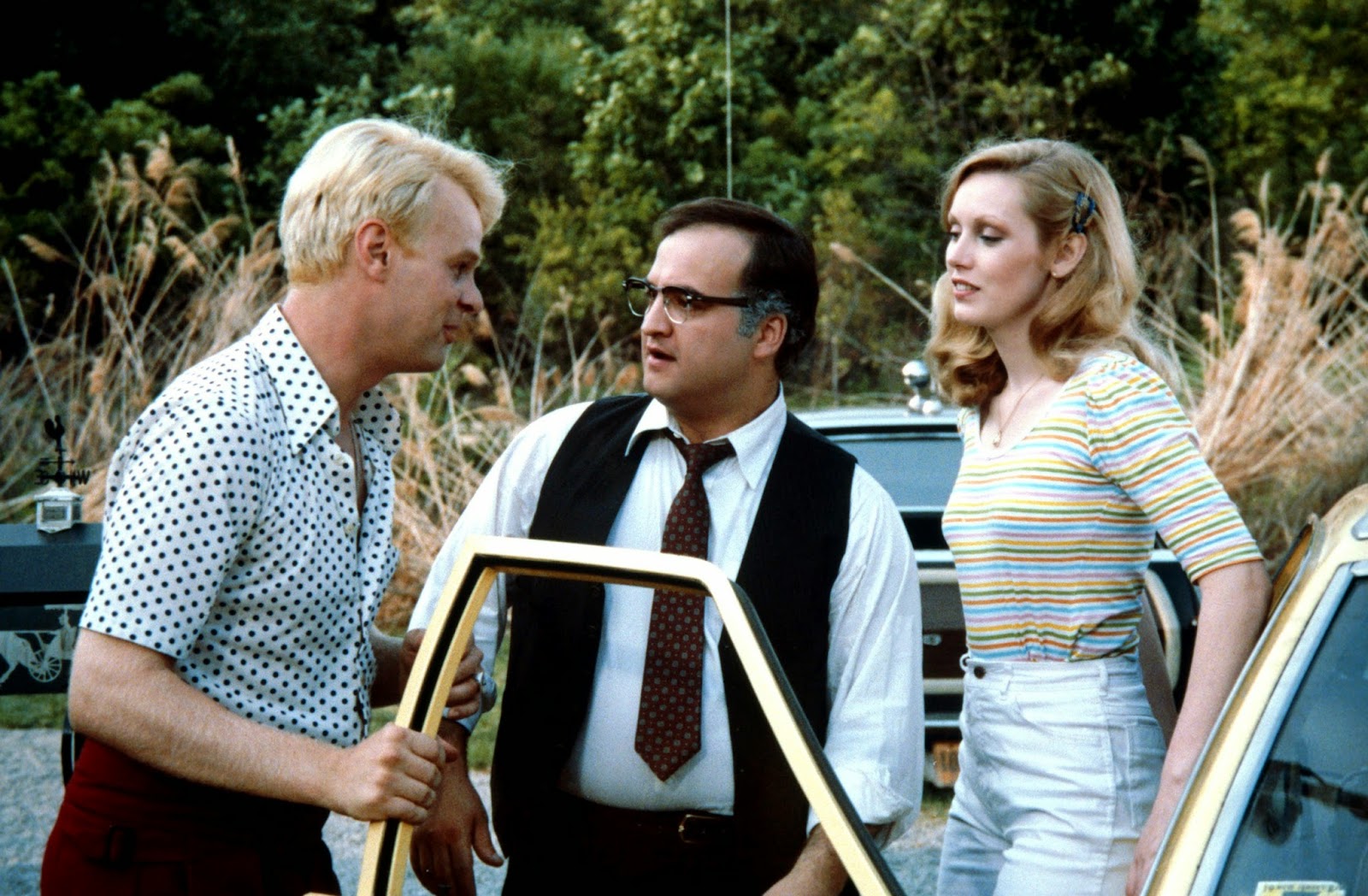 
NEIGHBORS should certainly be available on DVD when you consider the far worse films from SNL alums (OH HEAVENLY DOG!, MODERN PROBLEMS, even UNDER THE RAINBOW is planned for late 2007!) from the same era that are available.

Though it isn’t nearly as good as it could have been, NEIGHBORS is a genuine curio. An interesting failure is a hell of a lot better than an uninteresting one (see the Chevy Chase films mentioned above).

RE: the box-office disappointment and atypical Belushi role: not really valid reasons, when you consider that CONTINENTAL DIVIDE is on DVD.

Hey, Belushi was a comedy legend, and he only made 7 films.  This is his screen finale---his death at age 33 came a mere 3 months after this film was released. Shouldn’t it be out for historical reasons alone?
Posted by Hal at 6:36 PM

There's a widescreen anamorphic British DVD that can be bought rather cheaply ($12 US). Excellent review. I reviewed it as well.

I can't believe this still isn't on dvd. I have been waiting for this movie to come out on dvd for years now. This is getting ridiculous. May 30, 2010.

It is on DVD. I got my copy two months ago. Duh.