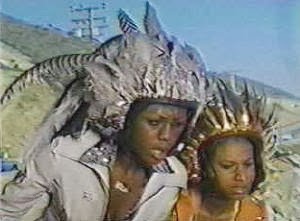 
Trina Parks' mother has turned up missing after being involved with an abortion clinic. It is clear to her that the racist cops (who harass the titular all-female motorcycle gang) won't help her, so she turns vigilante and searches Los Angeles herself while donning more disguises than Pam Grier in COFFY and FOXY BROWN combined.  Meanwhile several prominent African-American males have also disappeared and Parks finds evidence that points toward fast food magnate Norman Bartold.  The politically ambitious Bartold is publicly very supportive of the black community.  In private, he is a Ku Klux Klan benefactor who stages minstrel shows in his home, runs a literal southern plantation (in L.A.!), and plans to perform cloning experiments on his abductees. It is up to Parks to rescue her mother and to stop Bartold’s scheme.

Your typical blaxploitation revenge flick with a badass heroine, starring Parks (DIAMONDS ARE FOREVER) instead of Grier or Tamara Dobson, right? 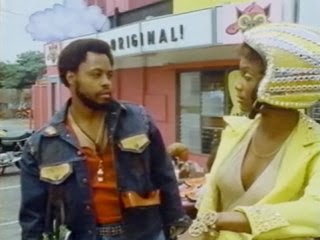 Well, not exactly. Actually, I just spent more time on the plot than Armitage did. The kidnappings are performed using giant nets, the climactic showdown is fought with giant pancakes, and the film opens with the Strutters defending themselves against several U. S. Marines using lemon pies.  The cops bumble like their Keystone counterparts and spend much of their time getting their plus-sized partner unstuck from doorways. Their police car has a ridiculously oversized flashing light taking up the entire roof and a siren that sounds just like a flying saucer in a 1950’s sci-fi flick. Various devices at the police station and in Bartold’s underground lair are meticulously labeled, just like everything on TV’s BATMAN. The Strutters have large, outlandishly glittering helmets and outfits from that moment in time when psychedelia was about to meet disco. The local ice cream man sells “Potsickles” (6 years before Cheech and Chong’s NICE DREAMS), Bartold's subordinates wear satin costumes with pig heads and the movie screeches to a halt frequently so that various cast members can break into song….whether they’re in a club, on the street, or jailed in the underground lair. 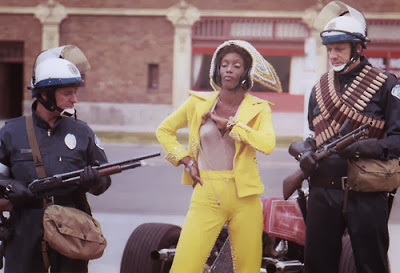 It’s I'M GONNA GIT YOU SUCKA 13 years early. Or it’s HELLZAPOPPIN’ 35 years late. Or it’s…oh, to Hell with it, DARKTOWN STRUTTERS defies any simple description. “You’ve never seen anything like it” is an overused and often inaccurate phrase. But not in this case.

Accomplished dancer and singer Trina Parks is in nearly every scene in her only starring role to date. She has to be wonderful in order for this unpredictable hodgepodge to work and fortunately, she is.  She is especially funny while disguised as a nun and a police officer, and trying out some kung fu moves with her brother (they end up destroying his house).  Inspired and uninhibited, Parks gets great support from a truly eclectic cast of familiar and not so familiar faces. There's a terrific energy and vibe to the film and while viewing DARKTOWN STRUTTERS you’ll get the feeling that the cast and crew members had a geniunely great time making it. 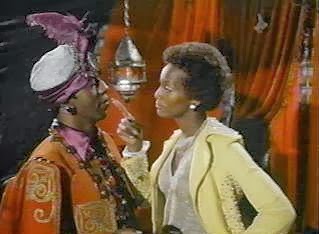 Director Witney, a B-movie veteran in his 60's at the time, uses silly sound effects (i.e. the slide whistle), the typically funky blaxploitation soundtrack, sped up film and unconventional transitions. While the film is hit and miss, the overall result makes you want to watch it again to catch jokes you missed the first (and second) time. Special mention must also go to set designer Jack Fisk for his part in bringing this outlandish live action cartoon to fruition.

Uneven, yes.  But never uninteresting.  DARKTOWN STRUTTERS is the type of film that you have to show to people to prove it actually exists after you describe it…..or make your best effort to.

The slapstick is way too silly for some, and there might well be more politically incorrect humor in this film than in any other film of the 1970’s. Which says a lot when you remember it was the decade of BLAZING SADDLES and THE BAD NEWS BEARS.

While there are a lot of familiar faces here, there’s no one with the star power of Pam Grier, Fred Williamson, or Jim Brown. 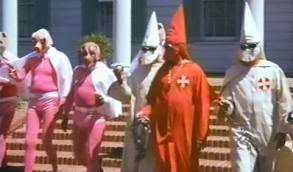 This seems like a must for MGM's Soul Cinema series.  It’s downright puzzling to me that it hasn’t been released as part of that series yet when several other lesser known films have (AMAZING GRACE, for example).


In addition to Parks' winning performance to there’s opportunities to see a lot of familiar TV faces on the big screen, including Raymond Allen (Woody on SANFORD AND SON and Ned the Wino on GOOD TIMES), Zara Cully (THE JEFFERSONS), Alvin Childress (AMOS N’ ANDY) and Roger E. Mosley (MAGNUM P.I.).

How many 1975 films addressed police brutality, cloning, abortion and the exploitation of minority voters?  Clearly ahead of its time.

To sum it up, this film is a great litmus test for anyone's sense of humor.  It's more over-the-top than I'M GONNA GET YOU SUCKA or UNDERCOVER BROTHER, and fans of both should find plenty to enjoy here.
Posted by Hal at 12:20 AM