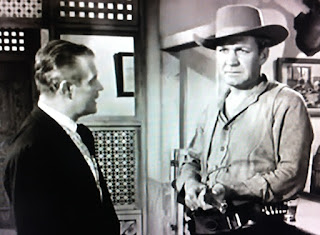 
The film adaptation of Lauran Paine’s Open Range Men was a somewhat surprising box office success in 2003. However, OPEN RANGE wasn't the first adaptation of a Paine novel for the big screen.  To find that, you’ll have to track down this effective little “B” sleeper that predates the big budget Costner vehicle by some 46 years, adapted by Eric Norden (PLEASE DON’T EAT MY MOTHER(!)) from Paine’s Law Man. 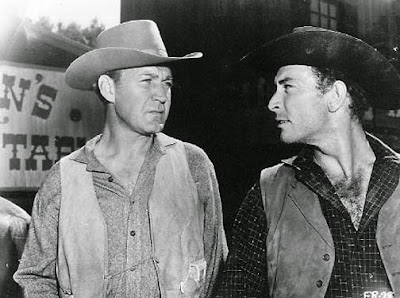 Forrest Tucker is the Sheriff of Rock River, a small town full of moral-minded busybodys who are outraged that Tucker’s longtime friend, rancher Jim Davis, has underage half-Indian Mara Corday living on his ranch after separating from his wife. Tucker’s friendship with Davis is complicated and somewhat strained--Tuck is also close to Davis’ estranged wife Kathleen Crowley and possibly in love with her himself.  With the flames being fanned by numerous townspeople, Davis is eventually forced to shoot an attorney in self-defense.

Davis flees with Tucker in pursuit, but several of the community's pillars are concerned that he will friendship stand in the way of duty.  So a posse is formed in town to catch up with Davis first. It is up to Tucker to stand up to the vigilantes and uphold the law, even if it means bringing the entire town to justice--and it might. Tucker must also investigate what is behind the intense interest in Davis’ personal life: was there a sinister motive behind the harassment that ended in tragedy? 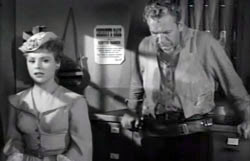 As directed by TV vet William Claxton, THE QUIET GUN chugs along at a lean 79 minutes, like an edgier, extended late-era GUNSMOKE episode. While it isn’t surprising to see a 1950’s Western making statements on McCarthyesque witch hunts, racism, and manipulation by powerful people for personal gain, there are a few wrinkles on the typical presentation here. There’s no redemption for the narrow-minded, intrusive townspeople who caused a murder, as a judge makes clear while passing sentence. But his speech is the only (brief) hint of sermonizing in this tight film. 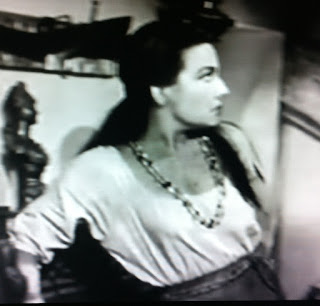 There’s a lot going on in the the heads of Davis, Crowley and Tucker that they don't verbalize.  Scenes between them are stiff and formal in tone: all three relationships, once close, are now in various degrees of estrangement. There’s also a neat twist in the method used by Tucker’s sheriff to hold off an angry mob until the arrival of the Circuit Judge. 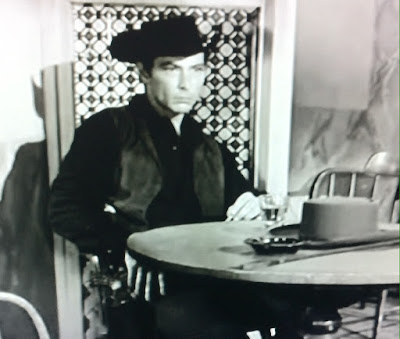 The usually affable Tucker rarely cracks a smile here; he’s properly authoritative in one of his better starring roles. Van Cleef is his most physically imposing adversary and shows us a full head of hair in his first scene. Hank Worden’s comic relief is especially welcome here given the tense, grim tone of the story. Jim Davis, who worked with Tucker frequently at Republic (they were antagonists in the also underrated CALIFORNIA PASSAGE), is also in top form, and there are few films that Mara Corday didn’t help during her brief screen career. Matter of fact, Corday’s presence alone should make this a cult item. 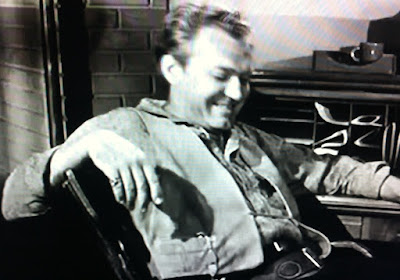 While not quite a lost classic, THE QUIET GUN is unjustly neglected--short and sweet with a great cast and a few interesting variations on what is on the surface a standard plot.

There’s literally hundreds of “B” westerns from the 1950’s that have been lost in the shuffle, and while this one is handsomely filmed in RegalScope, it is a low budget film, fifty years old, shot in black and white. 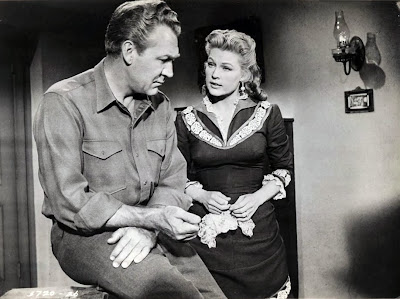 This is one example of a “B” film of the era being better than many of the “A” features, and at 78 minutes it could easily fit on a DVD double feature with one of the other deserving B’s of the decade. Its only formal release to date: a VHS double feature with AMBUSH AT CIMARRON PASS, which co-starred a young Clint Eastwood with 1950’s stalwart Scott Brady.

What a great cast: Van Cleef, Crowley (the most prolific MAVERICK leading lady), Corday at her most gorgeous, Tucker in fine no frills form, and two other great western stalwarts in top form in Davis and Worden. 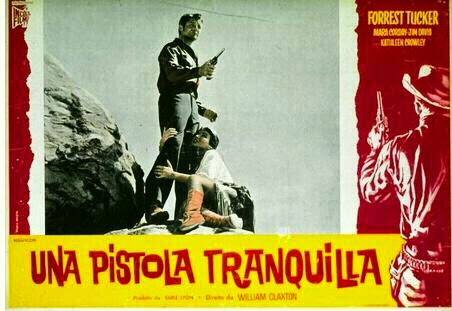 While it would likely be released without extras, any input from Crowley and/or Corday would certainly be welcome.

THE QUIET GUN has been a favorite on Encore Westerns in recent years. Unfortunately, it's in a pan and scan version. So why not a widescreen DVD? Apparently, someone out there is watching it besides me.
Posted by Hal at 4:10 PM

Me too is searching for the DVD...dont know really when that would be in shops finally...I am trying to get it through online shops..lets see if I can get one!its a lovely movie and there's so much to learn from the friendship portrayed on Tucker and Davis!