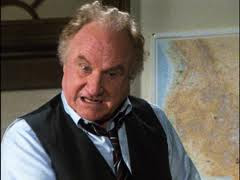 I was planning on hibernating for a few weeks....don't worry, there's plenty of DVD and "why the hell isn't this on DVD yet" reviews to come, but I have to comment on the sad news today that The Great Jack Warden has passed away at age 85.


Yes, Luke Fuchs has driven over the curb for the last time.


Without question, if you needed a character actor to deliver a hilariously profane line in the 1970's or 1980's, you could have hired Jackie Gleason, Brian Keith, Burgess Meredith....all good choices. But not one of them was in Jack Warden's league. The man was simply the greatest curser in the history of film IMO.

I reviewed the unjustly neglected SO FINE (1981) here back on May 3rd, which has one of his best, "boy, I used to fuck like that". Doesn't read that funny, but wait 'til you see it in the movie, in context. And....apparently he improvised it, because it isn't in the original Andrew Bergman script.  As is his inspired take on the streets of Venice near the fade-out.


And who can forget USED CARS? While you remember Russell's comment on the President, Frank McCrae's line about the protesting nuns, and Gerrit Graham's comment on the price of Roy's Mercedes....Warden as Roy L. Fuchs still has about 2/3 of the memorably profane lines in this film to himself.


Incidentally, USED CARS is, hands down, the greatest movie ever made, better than CITIZEN KANE, better than CASABLANCA, better than anything else ever, and I urge you to pick up the DVD.

"I know where the fuck Miami Beach is, dummy!"

"How long these streets been fucked up?"


You remember those lines, don't you? All delivered by The Greatness of Jack Warden. And there's dozens more where those came from.


Warden's resume is positively astounding: Oscar nominations for SHAMPOO and HEAVEN CAN WAIT, the hilariously suicidal Judge Rayford in ...AND JUSTICE FOR ALL, 12 ANGRY MEN, THE VERDICT, two TWILIGHT ZONEs, and two Emmy award nominations for his mid-1980's TV hit CRAZY LIKE A FOX.  Just for starters.

He kept working, and giving us laughs in the 1990's, with DIRTY WORK, BULWORTH, MIGHTY APHRODITE ("Does a Trojan Horse have a wooden dick?") and BULLETS OVER BROADWAY, all the way up to his final theatrical film, THE REPLACEMENTS (2000).

Apparently, witnessing Keanu Reeves' acting in person is enough to drive even the greatest into retirement. 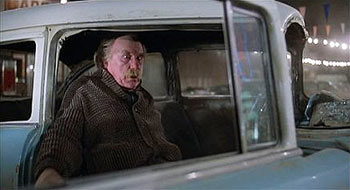 "Luke, we can't put your name on a granite tombstone, but we can keep it flying high above this lot. We can't even put flowers on your grave, but we can hang the finest weather resistant vinyl pennants and pinwheels money can buy. You'll be surrounded by a constantly revolving inventory of the finest automobiles money can buy. Ford, Chrysler, General Motors will be your tombstone. High volume, high visibility will be your epitaph. Rest in peace, Luke."
--Rudy Russo, USED CARS