Robert Blake is James Riddle Hoffa, Cotter Smith is Robert Kennedy, and BLOOD FEUD begins in 1956 with both men on the rise: Kennedy the new chief counsel of the Senate Permanent Subcommittee on Investigations and Hoffa aspiring to usurp the presidency of the Teamsters from Dave Beck. Hoffa initially thinks RFK will be an ally.  After all, he’s going after the corrupt Beck too, and Kennedy's father knows that "eventually everyone does business with everyone". But once Hoffa takes over the union, he finds himself in RFK’s crosshairs and in a tricky situation regarding the many favors he owes to organized crime. 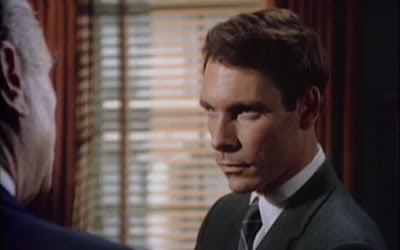 Jimmy Hoffa has proven to be fascinating, if infrequent, film subject. Jack Nicholson’s mannered 1992 take on Hoffa was praised by critics, and Sylvester Stallone made a thinly veiled Hoffa his first project post-ROCKY (1978’s F.I.S.T). Both big-budget features pale in comparison to the much lesser known, made for television BLOOD FEUD, which is anchored by the best performance of Robert Blake’s career. 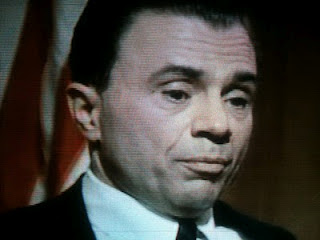 The perpetually troubled Blake was forced to put his BLOOD FEUD salary in escrow for the duration of the production. He responded with a performance that perfectly captured all sides of Hoffa: loyalty (to a fault), stubbornness, obnoxiousness in and out of court (count the times he refers to himself in third person) and competitiveness that hinted at a Napoleon complex. As the heat increases, so does Hoffa's paranoia, and Blake is positively chilling after deciding that his office is bugged or that the Kennedys have planted female spies at the Teamsters convention. Evoking defiance, desperation and ultimately realization, Blake presents the most well-rounded and formidable screen Hoffa to date. 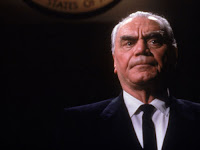 Blake is center stage but the acting is uniformly solid, with then-unknown Cotter Smith’s RFK matching the star in all areas except experience and charisma. Smith presents the less likable aspects of Kennedy’s crusading, including an obsessive competitiveness that matches Hoffa’s--at least, until the assassination of his brother. Ernest Borgnine is an inspired choice to play J. Edgar Hoover. Like Hoffa, he combats RFK’s antagonism, and, also like Hoffa, underestimates Kennedy considerably. Borgnine is good enough to make you wish he’d had the opportunity to play Hoover as the central subject of a film. Also particularly deserving of kudos: Brian Dennehy (as informer Ed Partin) and Danny Aiello (as a character clearly based on Hoffa loyalist and successor Frank Fitzsimmons).

Despite being talky and clocking in at 3 hours 15 minutes, BLOOD FEUD remains compelling throughout its runtime. Sure, there’s some dramatic license taken, but not intrusively.  Probably the biggest stretch is Hoffa’s Hail Mary of a phone call to RFK from a phone booth, but that scene is more than saved by Blake’s intensity. Contrary to one reviewer’s comment, the print I saw recently did not include a scene of Hoffa’s lieutenants celebrating Oswald’s murder as covering up their involvement in...well, you know. And yes, RFK’s reaction to Hoffa’s "burning the midnight oil" has a factual basis.  The opening half hour is a little slow, but BLOOD FEUD rewards the patient viewer. 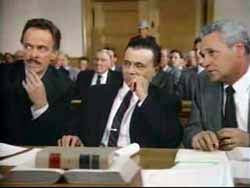 Given subject matter that was considered worthy of feature films in both 1978 and 1992, and the ongoing fascination with Hoffa’s fate and all things Kennedy, this one is a head scratcher that I have no explanation for.


This made for television miniseries surpasses both F.I.S.T. and HOFFA in all aspects: better scripted (by DOCTOR DETROIT‘s Robert Boris!), directed and acted. BLOOD FEUD might not have a Nicholson or Stallone at the top of the bill but arguably has the best overall cast.

Best of all is Robert Blake.  BLOOD FEUD is a reminder of just how good he could be, IMO surpassing his Oscar nominated performance in 1967’s IN COLD BLOOD. Fox Movie Channel occasionally airs this one, which was originally shown as a two parter in syndication, presented by Operation Prime Time. It’s well worth 3 ½ hours of your time.

And as an added bonus, BLOOD FEUD is your one chance to see the President of the United States played by our patron saint: Forrest Tucker!

Good call! I saw Blood Feud when it was first broadcast and was really impressed at the time, and have been waiting for it for ages!
Keep up the good work/Happy New Year!

"Fists was OK. "Blood Feud" was good. Hoffa was better. "The Irishmen" will be the best movie to come along since "The Goodfather."

This is one helluva cast for a TV movie (and a great subject, too). Any update on the home video release situation?

" Blood Feud " by leaps and bounds, blows " Hoffa ", " F.I.S.T * and all other movies about James Riddle Hoffa out of the water; my ABSOLUTE most favorite Robert Blake movie EVER--this should not only have been released theatrically when it came out. . .but most Assuredly should be released on Blu-ray DVD! Give it a look if you can find it--you'll be amazed how superior it is to any HOFFA movie past, present or future! ! !

Thank you Monumentally, Hal--for your Awesome critique of Robert Blake's " Blood Feud "; as I've already said, this is my Absolute Most Favorite movie of Robert Blake's. . .he was { with this production } at the pinnacle of his movie career; his " John List " film was excellent, along with some others--but " Blood Feud " truly is his crowning performance! By the by, although there isn't an official DVD release of " Blood Feud ". . .' PandorasVideo ' has it on DVD for $10.00+, if anyone's interested. I have a copy--it's Excellent! ! ! I really Love this movie [ along with my Most Beloved Elizabeth Montgomery movie: " The Legend Of Lizzie Borden " ]; this flawless cinematic production also was denied--not only an official theatrical release like " Blood Feud ", but also no official DVD release for over 40 years! Strange, how some films as these two brilliant and iconic movies weren't given the respect and exposure they deserved--proved beyond any shadow of doubt, that they are Superior to any other of their contemporaries! ! !