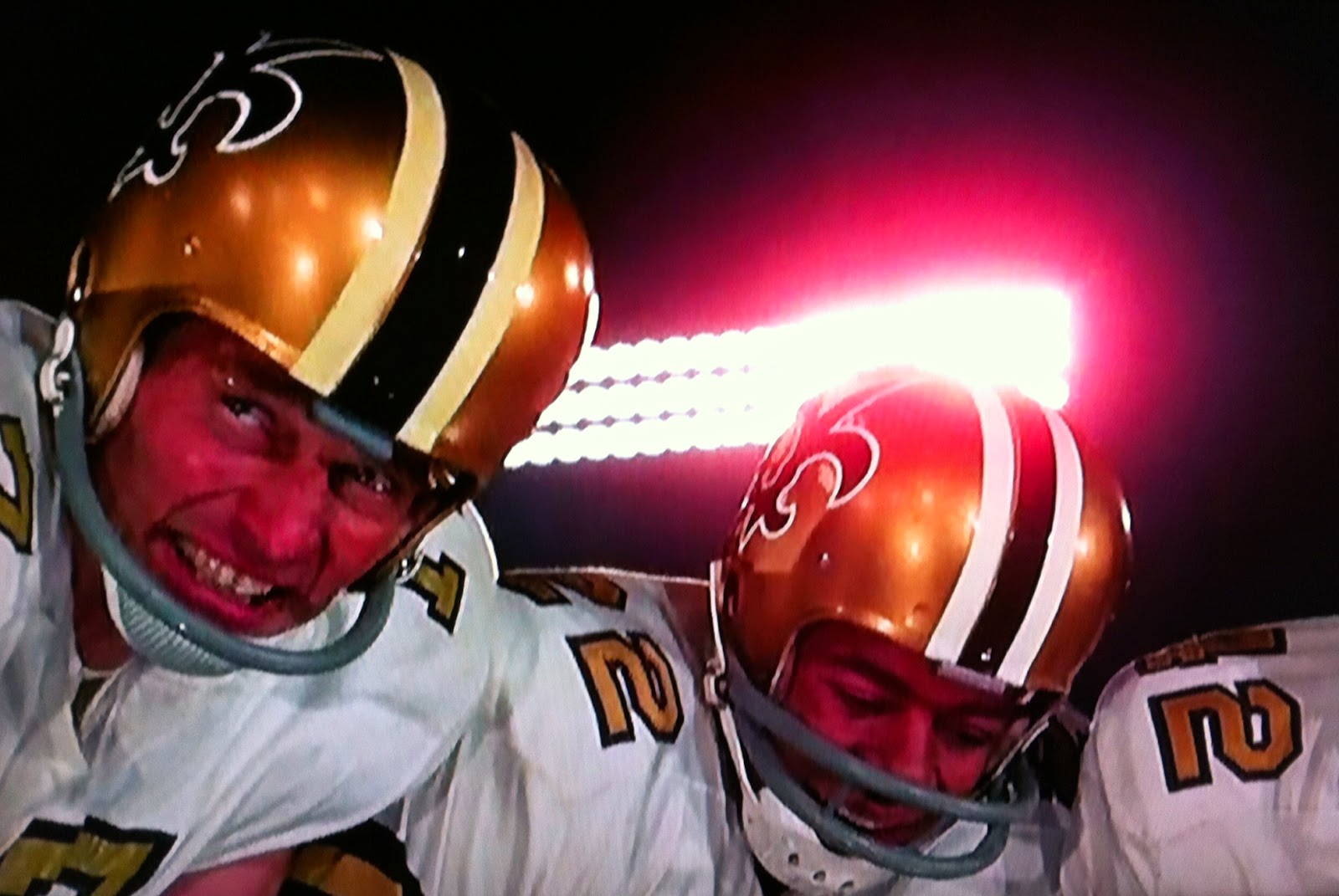 Forty year old New Orleans Saints quarterback Heston is a former Super Bowl champion, but he's playing poorly in the preseason and has talented rookie Elkins breathing down his neck.  While pondering the end of his career, Heston has plenty of problems outside the chalk lines as well.  Despite his past accomplishments, Heston gets constant reminders that his future away from football is far from assured.  It doesn't help that his marriage is on increasingly shaky ground, with wife Walter finding herself in a career of her own. Heston and Gries collaborated on three films in the late Sixties.  The first, WILL PENNY (1968), is cited by many as a true sleeper and Heston himself deemed it his favorite work in his biography In the Arena.  The star's warm feelings did not extend to the followup, NUMBER ONE, which Heston cited as his worst in the same book.  I think he's being too hard on NUMBER ONE, but the film has its share of problems, beginning with the star's failure to make a convincing NFL quarterback. 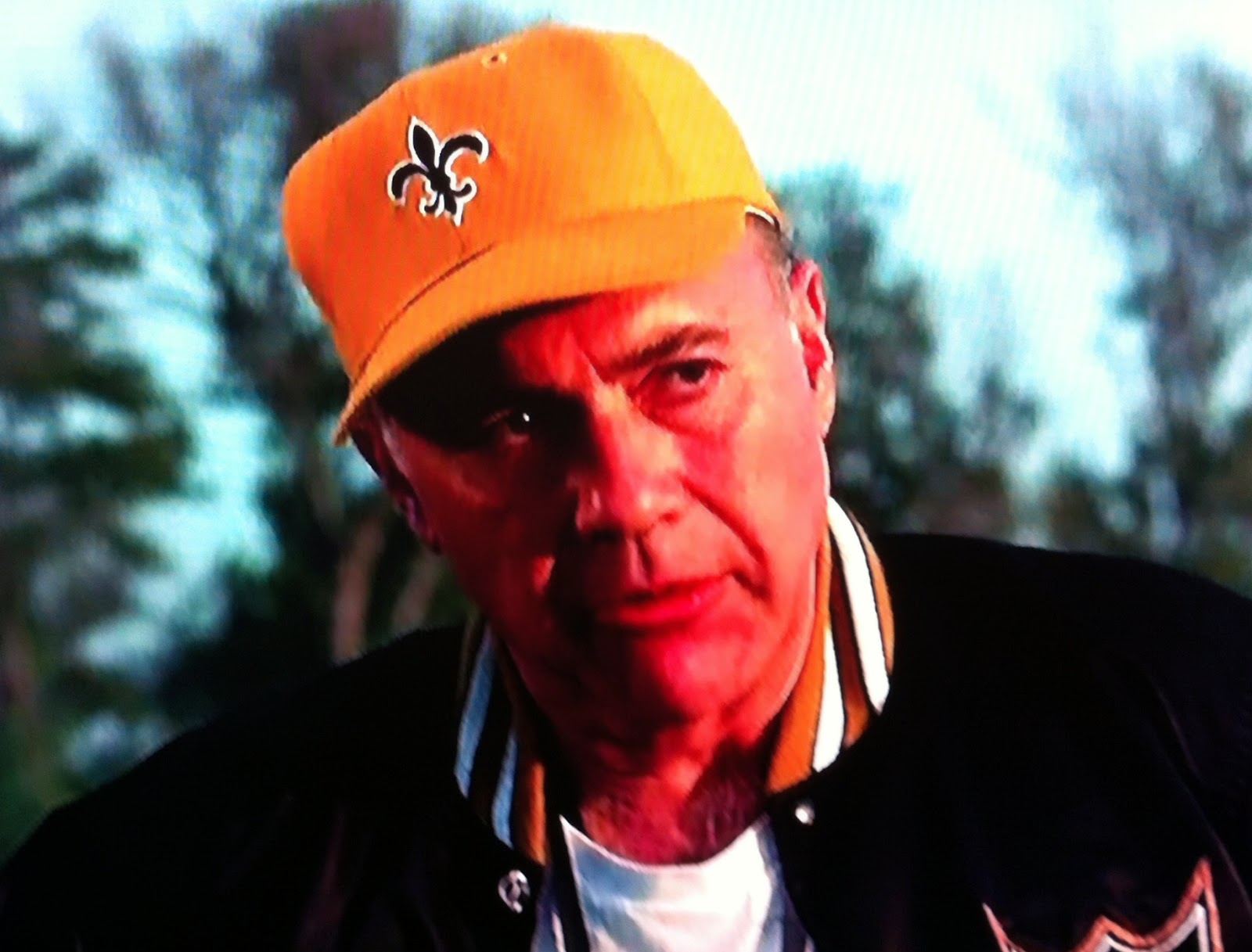 Then-Saints quarterback Billy Kilmer was on hand to give Charlton Heston passing pointers, but while Kilmer was a gritty winner, he didn't exactly remind you of Dan Marino with his mechanics--which Heston was directed to emulate (in order to match the stock footage).  Despite his 6'3" height and the larger than life aura he brought to so many prestigious historical and sci-fi projects, Heston never looks any more like a professional signal caller on the field than Alan Alda (as George Plimpton) did in PAPER LION the year before. 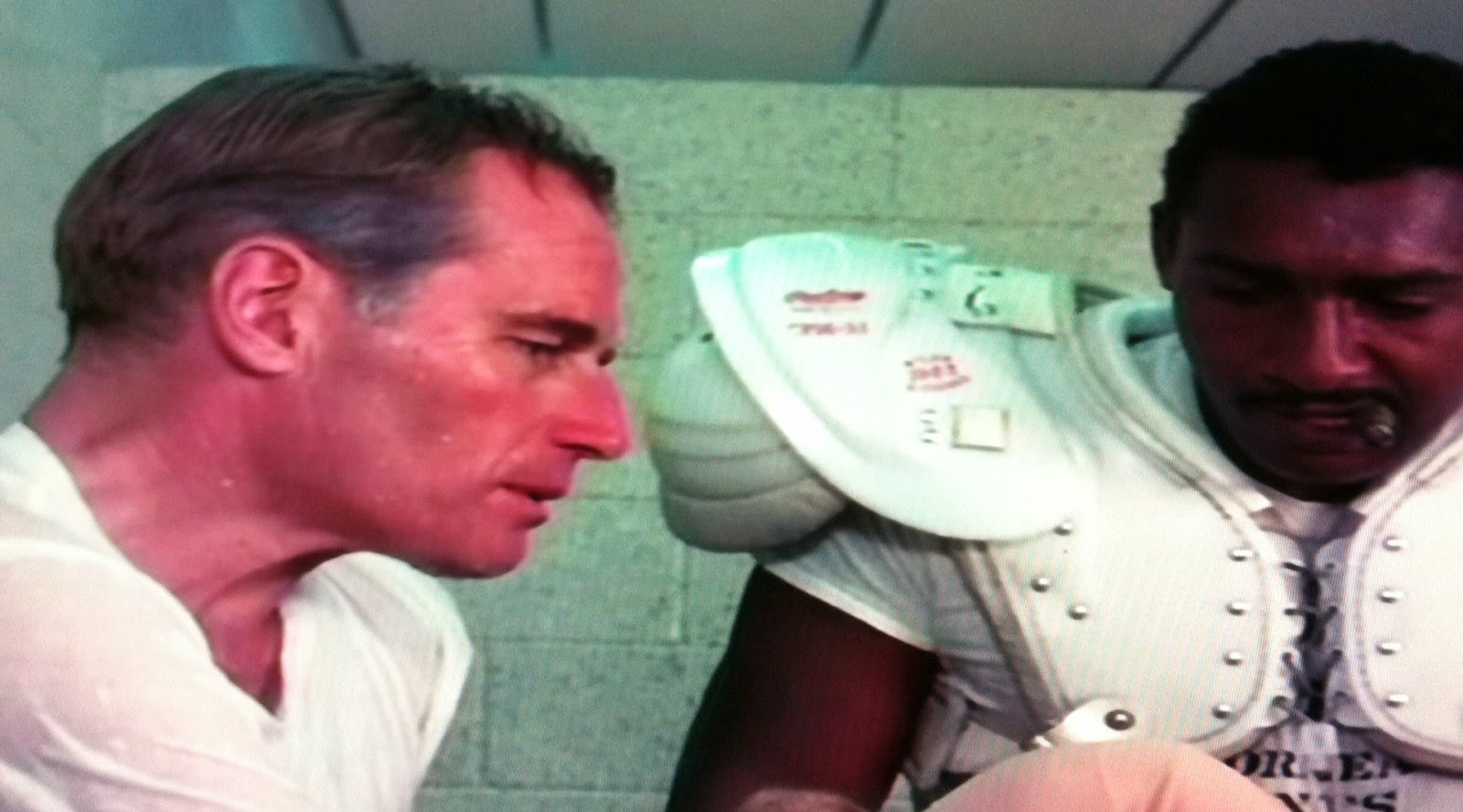 Forty-six at the time, Heston is also too old for the part, something further complicated by the character being an ancient (for a QB) 40 in the script.  How many 40 year old quarterbacks even now have "three good years left" (as coach Randolph claims Heston does), much less in 1969?   The star gives his customary all on and off the field (he sustained three broken ribs absorbing one tackle) as the prickly Ron "Cat" Catlan, but comes across as stiffer and less charismatic than usual.  Stilted dialogue by screenwriter David Moessinger (later executive producer of QUINCY, M.E. during much of The Hilarious Years) hinders him away from the stadium as well. 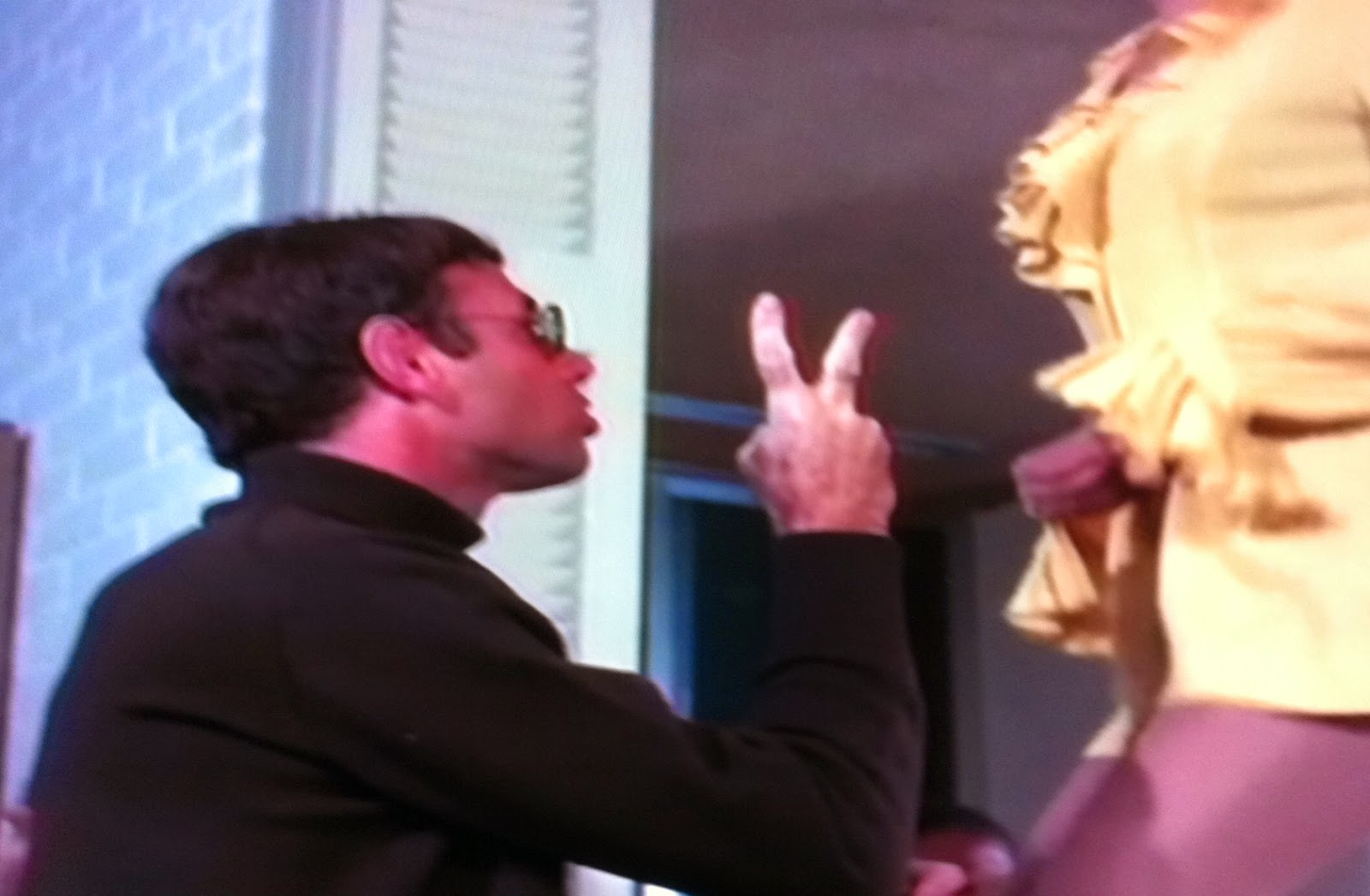 This isn't to say that NUMBER ONE isn't a film of some interest.  Retired offensive lineman Jenson is reduced to asking Heston for a $200 handout, something sobering in light of the financial and personal problems faced by many former players (including star linemen of the day Jim Tyrer and Mike Webster) during post-NFL life in the years since.  Few football films had explored this at the time.  We're told several times that Heston will have a difficult time adjusting to life after football financially, but the point of the prescient dialogue with Jenson is unfortunately undermined elsewhere.  Heston's problems are shown to be more emotional than monetary (in conversation with wife Walter), with no shortage of potentially lucrative opportunities in retirement.  Former teammates Troup and Dern are wildly successful in their respective business ventures, and both offer him a job, with Dern wanting Heston badly enough to blatantly root for his old quarterback's failure on opening day.

In another progressive move for a 1969 film that isn't undercut, African-American Elkins is the quarterback of the near future for the Saints, with the media and many fans anxious to see him take over for Heston.  Just three weeks after NUMBER ONE was released, James Harris became the first black signal caller to start on opening day for the AFL Bills, and at the time college stars at the position (i.e. Marlon Briscoe) were usually asked to change positions in that league and the pre-merger NFL.  The situation would sadly continue for many years (i.e. Warren Moon's undrafted status).  The matter-of-fact approach taken by Gries is especially refreshing given this real-life context, as only Elkins' talent matters and no reference is made to his race.  Unfortunately, Stephen Franken's stereotypically gay designer is presented in a less enlightened manner.

Just as the aforementioned PAPER LION was made with the cooperation of the NFL and the Detroit Lions, NUMBER ONE had the same support, with real-life Saints players Monty Stickles, Danny Abromowicz and Hall of Famer Doug Atkins (entering his own final season in '69) playing themselves.  Retired NFL'er turned painter Ernie Barnes, the teammate closest to Heston, would later become well known for providing the highly visible artwork for TV's GOOD TIMES (1974-79).   Off the gridiron, New Orleans jazz icon Al Hirt appears at himself, and both Dern and future NORTH DALLAS FORTY coach Spradlin also co-starred with Heston in Gries' WILL PENNY. 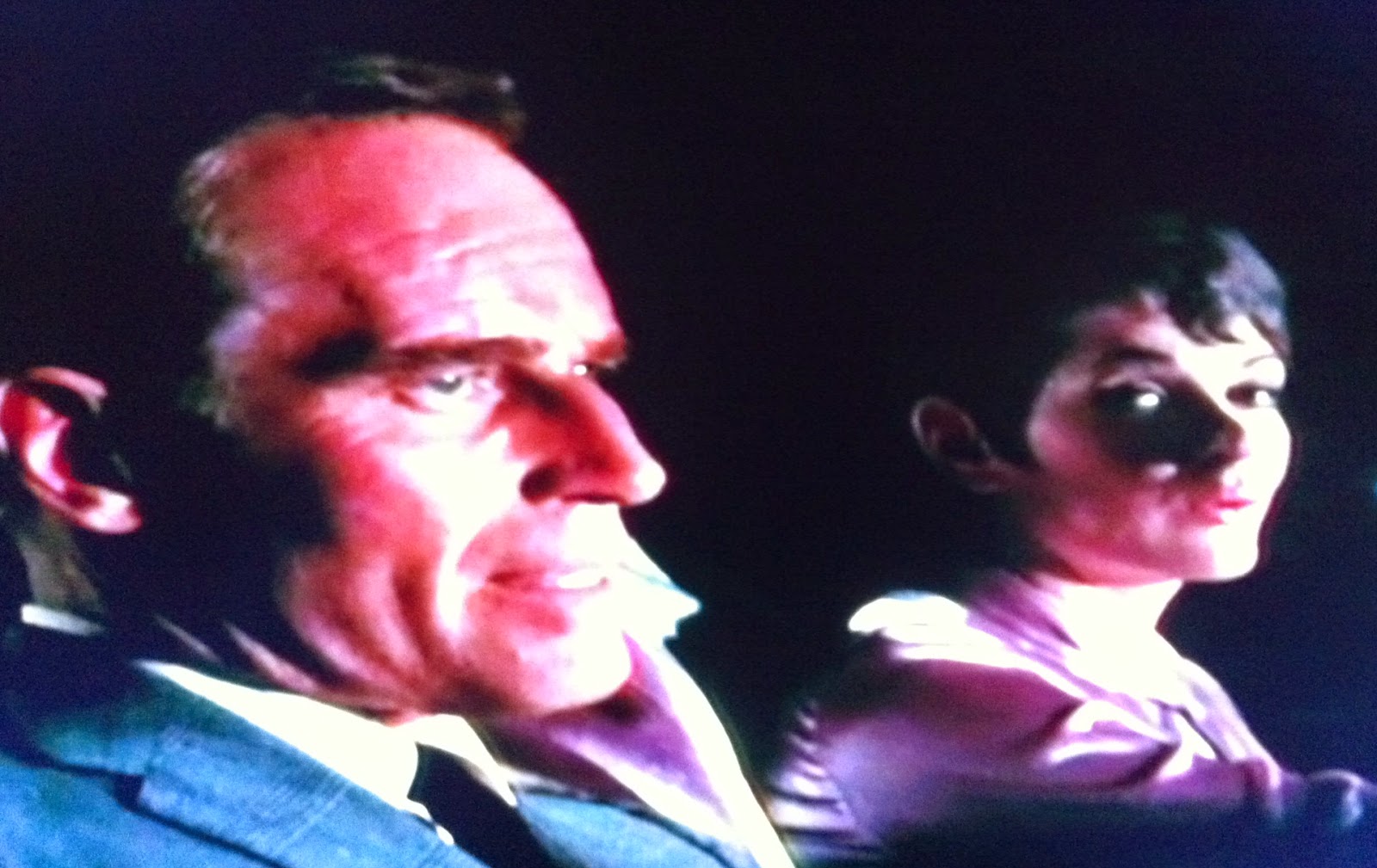 Underappreciated as a director, Gries (BREAKHEART PASS) chose an appropriately jazzy score, filmed on location in Louisiana, and didn't shy away from ending the movie on the downbeat note that seemed inevitable throughout.  Too bad that the missteps elsewhere kept NUMBER ONE from coming anywhere close to the status suggested by its title. While it's no pigskin classic, it doesn't deserve its present obscurity either.

There's some effort made to show the physical effects of the sport in scenes between Heston and team doctor Spradlin, but the frankness of NORTH DALLAS FORTY was still a decade away in 1969.  Still, it was coming, and NUMBER ONE became dated quickly.  This, more than Heston's on-field miscasting, seems to be the reason that NUMBER ONE is largely forgotten.  PAPER LION (1968) (also not on DVD) suffers from the same problem, but, being a comedy at heart, it wasn't affected nearly as adversely as the more serious subject matter tackled here. 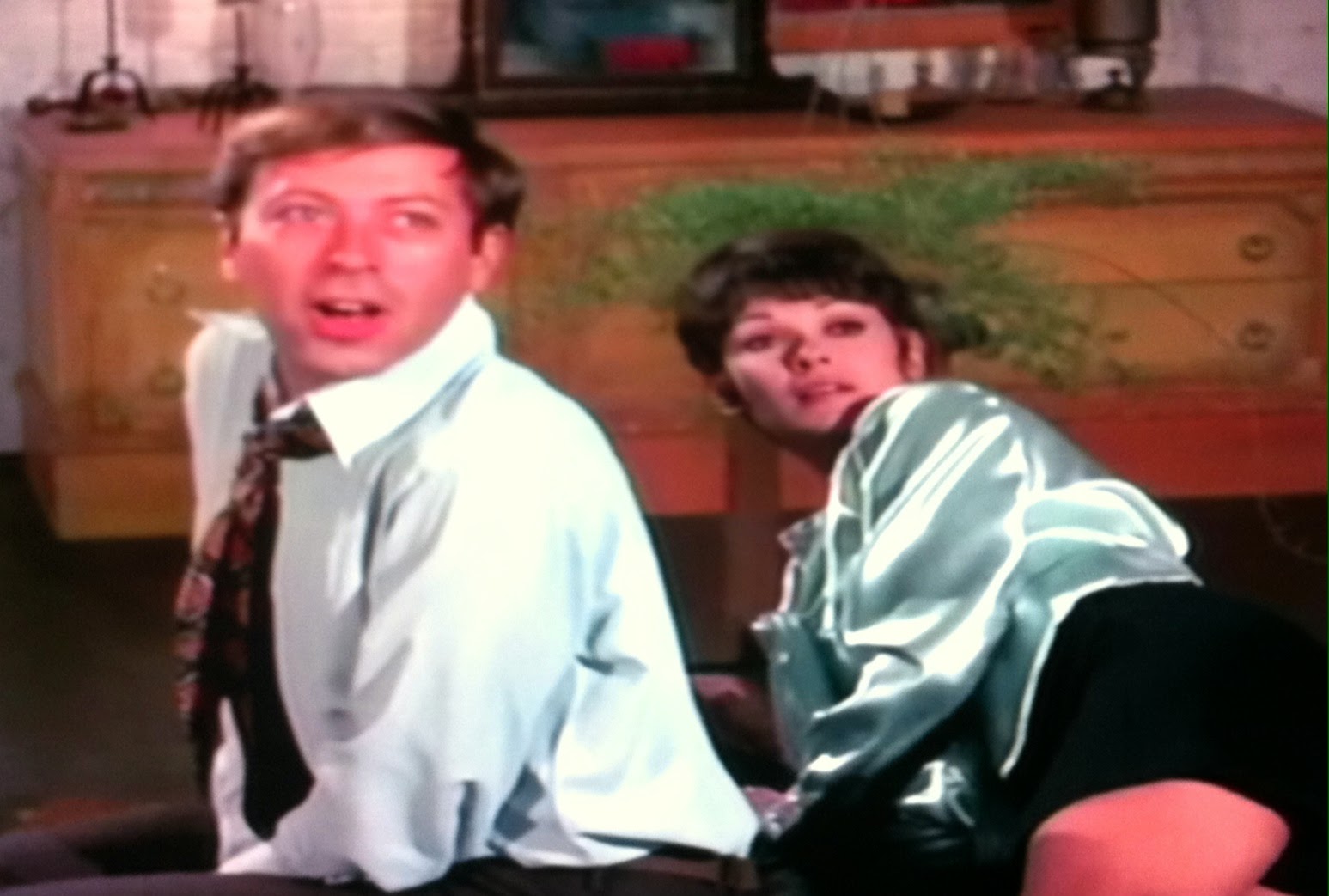 On the plus side of the era discussion, you do get authentic Browns, Saints and Cowboy uniforms, something that the NFL wouldn't allow in the years to come for those films more critical of the league (FORTY, ANY GIVEN SUNDAY).

The "snapshot of a bygone era" angle: NUMBER ONE would seem to be a must for Saints fans, particularly those old enough to remember when the team played its home games the old Tulane Stadium, a.k.a. "The Sugar Bowl" (which it hosted for 40 years).  The stadium stood from 1926 to 1980 and hosted the Saints until the Superdome opened in 1975.  That  long demolished venue is on full display here.

While it doesn't quite fit in with WILL PENNY (which doesn't need a partner, really; it is superb), NUMBER ONE would make a nice Heston-Gries twofer with THE HAWAIIANS, which seems a little overpriced on its own.  Dern and Atkins are among those still with us who would be available for extras.  NUMBER ONE recently aired on the MGM HD channel, so watch for a possible repeat showing there.
Posted by Hal at 9:26 AM

So Hal, what do you make of the ending of this movie? I remember seeing this on Saturday Night at the Movies a few years after it came out, and wondered if Heston's character had (spoiler alert!) actually been killed by that last hit. Was I just unsophisticated enough to figure out that it was his career that had died, or was the ending really that ambiguous? If he did live, it would have been a somber post-retirement career.

Speaking of which, have you ever seen an old Hallmark Hall of Fame called "A Punt, a Pass and a Prayer" starring Hugh O'Brian? Similar type of story, same wasted potential - not one of the classic HOF era's better efforts.

Hi Mitchell, thanks for reading! Funny you brought that up because that crossed my mind, but after repeat viewings, I think it was just a career-ender. One thing that I thought was strange (and poorly presented by Gries IMO) was the fact that no player went near him after the hit or seemed the least bit concerned! Even Mrs. Catlan was stoic as she left her seat. I'd lean towards injured, but not fatally so, but still (further spoiler) the location of the blood looked like a real concern. Maybe it was meant to evoke the famous Y.A. Tittle picture from his last championship game--but Tittle was conscious, and upright.

I've never seen the O'Brien football flick-would love to see it based on the description though. Good or bad I'm a sucker for a football film. :) (I keep meaning to review the 1972 FOOTSTEPS flick here too.)