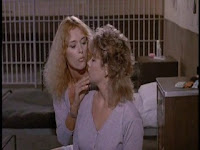 Linda Blair is a naive teenager sentenced to a women's prison after a manslaughter convinction from an auto accident. Once there, she finds a very corrupt administration. Cocaine-snorting, drug dealing warden John Vernon enjoys a jacuzzi in his office and shares it with inmates willing to demonstrate "good behavior" with the caveat that he be allowed to videotape the proceedings. Guard Stella Stevens is in cahoots with pimp Henry Silva, skimming from Vernon's cocaine supply and selecting the prison's finest for escort work. 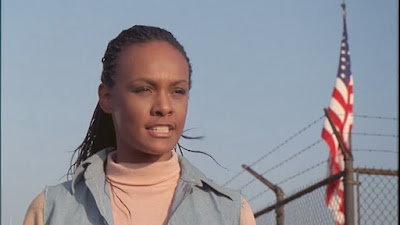 In order to preserve the profitable status quo they keep the prisoners segregated in a "divide and conquer" strategy, fanning the flames of racial tension between the prison's white and black factions, respectively led by Sybil Danning and Tamara Dobson. Danning consorts with Silva behind Stevens' back, while Dobson takes a dim view of the drug trade and warns Danning and company not to let it spill over to her side. 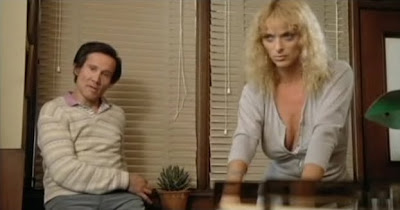 CHAINED HEAT is everything that we've all come to expect in a women-in-prison flick, only even more over the top and reveling in the tastelessness like no other 1980's entry. You want sleaze? Vernon takes Gabrielle to his jacuzzi and brags about the size of his homemade porn collection. How about nudity? Gabrielle, Danning and Blair display their wares during the obligatory shower scenes. Catfighting?  Dobson and Danning duke it out with knives, chains and racial slurs during exercise period. You want lesbianism? Danning also thinks Blair is the cat's meow. You want a revolt? You got one of the best at the end of this one. Hope I'm not spoiling anything there. 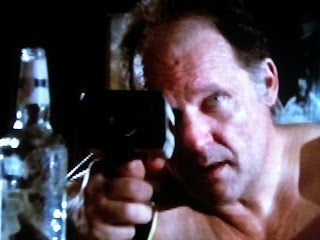 You want sensitivity? Well, you've come to the wrong place on that one, although Vernon does show his tender side after a favorite inmate is murdered. "She was the best piece of ass I ever had in here!" he notes with sadness.

CHAINED HEAT is commendably ridiculous from start to finish, with the boom mike making what may be a record number of appearances in a theatrical release and an incredible number of men AND women finding Blair attractive. The acting of the bit players is downright excruciating, but the big genre names here all know how to overplay shamelessly with style. Vernon has the best lines and manages to deliver them with a straight face, Silva smiles fiendishly as only he can, and Vassar graduate(!) Dobson makes up for her unbecoming language ("Bullfuckingshit!") by calling Danning a "chalk-faced whore" prior to the big fight. 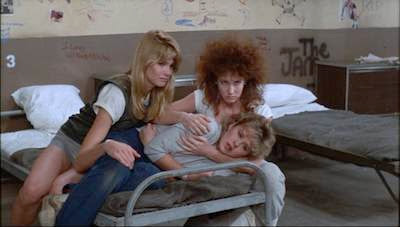 CHAINED HEAT has a dream exploitation cast, every genre cliche in the book, and arguably more jaw-droppingly hilarious moments than any other WIP flick. A bit of trivia: this was the only wide release that anyone dared to send out there against the highly anticipated RETURN OF THE JEDI on Memorial Day weekend in 1983. Sure, CHAINED HEAT lost the box office battle that weekend, but 25 years later, which film would you rather watch, right now?

Yeah, that's what I thought!

It keeps getting announced, then postponed. I'm not sure what the holdup is at this point, since the vastly inferior sequel CHAINED HEAT 2 (with Brigitte Nielsen) has been out for several years.

It's probably the best WIP film of its decade, with a dream exploitation cast to rival the Jack Hill classics of the early 1970's and more laughs than any of those films. 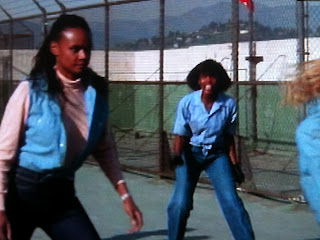 A true cult classic, with a devoted following that keeps turning up in widescreen (with some violence edited out) on Showtime and Flix. Speaking of those edits, a restored version would be yet another reason to get this out.

Who wouldn't want a commentary, with the likes of Blair, Danning, Silva and Stevens all available to participate?

A great double feature could be made available with its nominal "prequel", 1982's THE CONCRETE JUNGLE, which is a more serious approach (what wouldn't be?) and is even harder to find, but does star Jill St. John.
Posted by Hal at 9:31 PM

In regards to your comment about 'Return of the Jedi' vs. 'Chained Heat'...

"which film would you rather watch, right now?


Yeah, that's what I thought!"