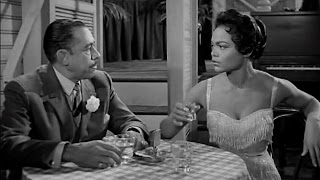 In what would be his only lead in a feature, legendary crooner Nat “King” Cole plays legendary songwriter W.C. "Will" Handy.  When we first meet Handy, he's in childhood (played by 11 year old Billy Preston) and being admonished by his stern minister father (Juano Hernandez) for being late to church and for buying a cornet.  To Reverend Handy there are only two kinds of music, "the devil's and the Lord's" and he destroys the instrument. But Will’s love for the blues doesn’t go away easily, and after the adult Handy returns from his studies he confesses to his fiancée Elizabeth (Ruby Dee) that he’s also been performing in minstrel shows. Will’s songwriting talent brings him to the attention of sexy nightclub singer Gogo Germaine (Eartha Kitt), and soon Handy is writing songs and performing with Gogo in a local club, The Big Rooster. Handy’s night life is a complete secret to his father—until a church choir member (Mahalia Jackson) spots him there while cleaning up one night. 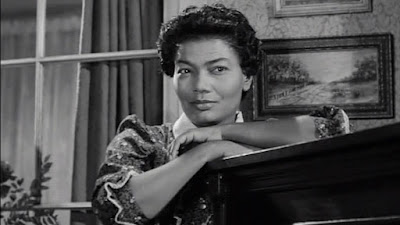 ST. LOUIS BLUES boasts perhaps the largest cast of music legends ever assembled for one dramatic film, and we aren't talking cameos (as in, say, THE BLUES BROTHERS). While Cole is a bit wooden at times, this fits the film’s presentation of Handy as a reserved man who grew up under a dominating and strict father.  Pearl Bailey sings a few lines of the title song (sadly, she doesn't finish it) and has a plum role as Handy’s verbose and understanding Aunt Hagar. Cab Calloway surprisingly doesn't sing, but he is solid as always dramatically as the shady owner of the Rooster.

However, the real standout here is Eartha Kitt, in probably her best screen performance with the best-written role in this uneven script. Kitt’s Gogo Germaine is an assertive diva who dresses provocatively, but avoids all the bad girl stereotypes we expect.  She doesn't try to steal Cole away from "good girl" Dee, as she’s interested in him professionally, not sexually. She also rebuffs Calloway’s advances: firmly focused on her career yet using only her musical talent to get ahead. Refreshingly, for all her ambition she doesn't step on people to reach the top, always giving Handy full credit for his songwriting.  Kitt was never sexier, and while she had a tendency to overact in some of her later roles, she hits just the right note here from start to finish. She’s also given the script's most memorable lines when confronting Reverend Handy on his prejudice in a wonderfully delivered speech.

It’s a good thing Kitt and Bailey are here to spice things up, because the overall tone is too restrained for a film about "the Father of the Blues"--the "one pure art form to originate in America". The late Allen Reisner was almost exclusively a director of episodic television. ST. LOUIS BLUES was his second and last film (his other feature, ALL MINE TO GIVE, was also too melodramatic at times). He directs the musical sequences very well but the pacing lags here—he was perfect for hour-long television dramas. 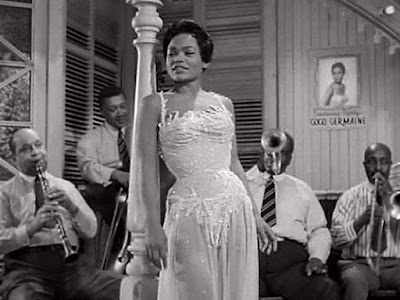 Also, typical of film bios of the time, (melo-) dramatic license is taken, and the embellishments haven't aged well.  For example: while it is true that Handy suffered his first onset of blindness as a young man (he was 30; he later regained his sight, then lost it for good after a subway fall in his old age), his ailment comes across as hokey and contrived as presented here. It is even implied that the blindness is retribution for his "sinful" nightclub exploits, and that he is healed by the gospel. You also won't find any mention of the real W. C. Handy's fight against racial prejudice--the Paramount suits of 1958 probably weren't ready for this to be an element in the script. Instead the film Handy struggles against the prejudices of his father as a substitute, a longtime staple of music bios (i.e. THE BUDDY HOLLY STORY).

It is a low-budget black and white film from 1958 and the sum isn't quite the equal of its parts. Strictly average direction and the overly melodramatic elements of the screenplay have not aged well. This tendency towards melodramatic license afflicted other screen biographies of the period, too, such as MAN OF A THOUSAND FACES and THE SEVEN LITTLE FOYS. 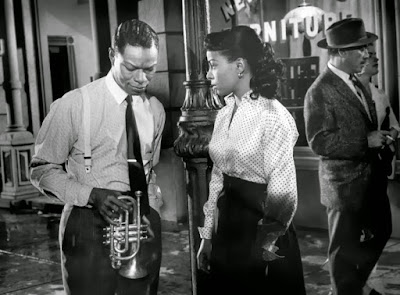 ST. LOUIS BLUES isn’t that well known, but it should be. This is a once in a lifetime cast. You have Cole, Kitt, Bailey, Ella Fitzgerald (an anachronistic but still welcome cameo) and Mahalia Jackson, all with at least one song (multiple songs for Kitt and Cole) and performances by other legendary jazz musicians such as Teddy Buckner, clarinetist Barney Bigard, and as mentioned earlier, young Billy Preston on the organ.

Future Catwoman Eartha Kitt's best screen performance IMO; this a must see film for sure if you're a fan of hers.  Orson Welles once called her "the most exciting woman in the world"; seeing this film, I understand why. 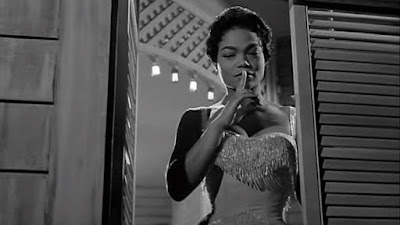 Eartha Kitt and Ruby Dee are both still with us in their eighties, and a commentary would be fascinating to hear. How great it would be to have a DVD release with not only that, but perhaps a more fact-based featurette on W. C. Handy's life and a "making of" featurette too. Me, greedy? Nah......

Incredibly, ST. LOUIS BLUES was never even released on VHS! A DVD release is long overdue; especially with the film’s 50th Anniversary less than a year away.
Posted by Hal at 12:39 AM

Hi. Your comments on the film St. Louis Blues are right on. I recorded the film when it showed on TCM last year, then (alas) recorded over it. Now, I realize that I want to use about 5 minutes from early in the film in a unit on the Harlem Renaissance for a class I am teaching this fall. I would like to use the clip on 10/29, but by unhappy coincidence TCM's next showing is at 1:00 am on 10/30. Do you know any way I could get access to a short section of the film? I want to depict the culturally conservative reaction among some members of the African American community to the modernism of the Harlem Renaissance. Thanks. Norton Wheeler

Norton: thanks for the kind words. I will see if I have another copy; I'm not sure if I do or not. Otherwise, the only place I've seen copies available has been on ebay from time to time.