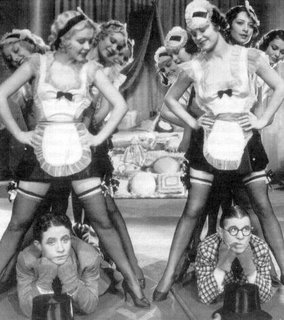 While Laurel and Hardy, the Marx Brothers, the Three Stooges and W. C. Fields have seen their respective legends grow in the last 70 years, history has not been as kind to their RKO contemporaries, Wheeler and Woolsey. Bert and Bob have their defenders, but they are usually relegated to the era’s second tier and considered a flash in the pan, popular in their own time but completely irrelevant outside of it. In a way, the Salieri to, say, the Marx Brothers’ Mozart. 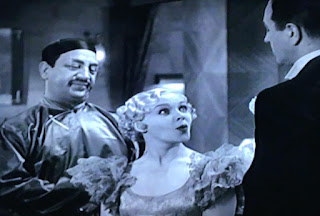 Okay, so Wheeler and Woolsey aren’t the Marx Brothers. They aren't Jack Pearl or Joe Penner either. Wheeler and Woolsey rushed through 21 films in only 8 years (compared to the Marxes’ 7 in the same 1929-1937 time frame) and as a result, they have a lower batting average than their better remembered comtemporaries, but they did make a handful of very funny films worthy of rediscovery.  DIPLOMANIACS actually beat DUCK SOUP to the punch (by six months) in 1933.  The two films share the same screenwriter, the same surrealism, the same anti-war message, the same frustrated Edgar Kennedy, and the same villainous Louis Calhern.

Bert and Bob have opened a barbershop on the Adoop Reservation---not a good business decision, since "Native Americans do not grow beards". (According to the film, not me.--HH) When members of the tribe overhear the usual barbershop talk about foreign affairs, the Chief decides that the stylists should represent the Adoops in Geneva (recognizing that these white men might make an effective front) and present the tribe's plan for peace. Meanwhile ammunition executive Louis Calhern has developed an explosive bullet, and needs a war in order to realize the profits. 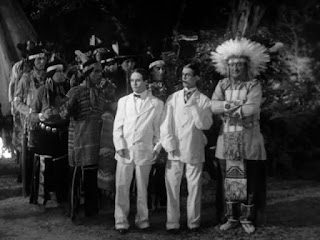 Assisted by Chinese(!) henchman Hugh Herbert, Calhern pulls out all the stops to sidetrack the duo: vamp Marjorie White, femme fatale Phyllis Barry (her kisses are literally fatal), sabotaging the ocean voyage, and an assassination attempt. But Calhern is continually thwarted either by the dumb luck of Wheeler and Woolsey (a staple in all their films) or the creepily omniscient Adoops, who live up their warning that they will always be watching.  When our heroes arrive at Geneva, they find the conference in complete chaos and the League of Nations to be entirely ineffective. Can our diplomaniacs save the world from itself? 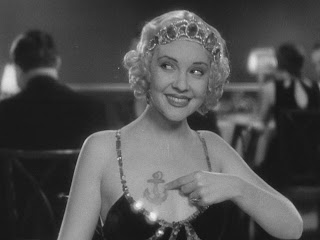 Just as Groucho does his absolute worst as Freedonia's leader in DUCK SOUP, Wheeler and Woolsey are woefully incompetent diplomats. They lose the peace plans more than once, dress ridiculously at functions, give their secret mission away to just about everyone “in confidence”, get blind stinking drunk as guests of honor at a dinner, become repeatedly distracted by pretty women, and consider embezzling the money they’ve been entrusted with.


While DUCK SOUP sends up world leaders using the fictional country of Freedonia, and occasionally points out the absurdity of war (“I’ve already paid a month’s rent on the battlefield!”), DIPLOMANIACS uses the names of actual countries and cities and the anti-war content looms larger. The film moves smoothly from one nonsensical scene to the next, while making its satirical points: everyone talks of peace but no one actually wants to do anything about it; eloquent and intelligent words fall on deaf ears while acrobatics have everyone’s rapt attention; and as is always pointed out in anti-war films, no one wins in a war---no, not even Calhern and Co., who run afoul of their own invention. 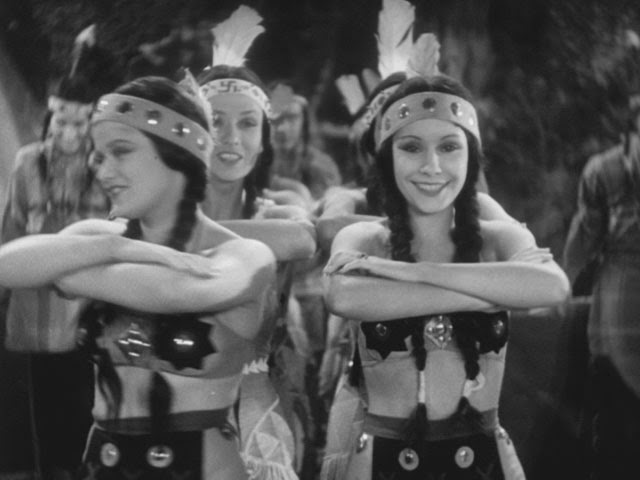 In keeping with Wheeler and Woolsey’s reputation as the dirtiest of the pre-Code screen comedians, sex talk is plentiful and surprisingly blatant. Unfortunately, so is uncomfortably un-PC humor. The “white vamp” is ordered from a vending machine and arrives wrapped in plastic, built to serve man in only one way; Herbert’s character is named Chow Chow; numerous Adoops speak only one word, “Oompah!”; and, most notorious of all, a bomb explodes in the peace conference, with the fallout giving everyone blackface---the conference then becomes a minstrel show with the song, “No More War”. To be fair, though, Herbert and the two Adoops with lines avoid the usual stereotypical broken English, and Woolsey’s one attempt at it is quickly and hilariously skewered by the tribe's Oxford-educated chief--who turns out to be the film's only intelligent and honorable character. 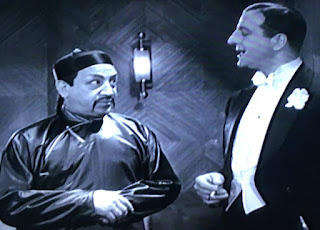 Chow Chow is a complete smartass (or as Calhern had to put it in 1933, “wise guy”) who always gets the best of his boss verbally. As for the minstrel show, well, there's no defending that thankfully long-gone art form.  The presence here is a real shame, because one has to see this otherwise sharply satirical number to believe it: the balcony joins in as Bert and Bob sing riotously heavy-handed lyrics reminding the delegates that eternal damnation awaits if they don’t sign the peace agreement.  (Woolsey's glasses magically change from black to white for the duration of the number.) 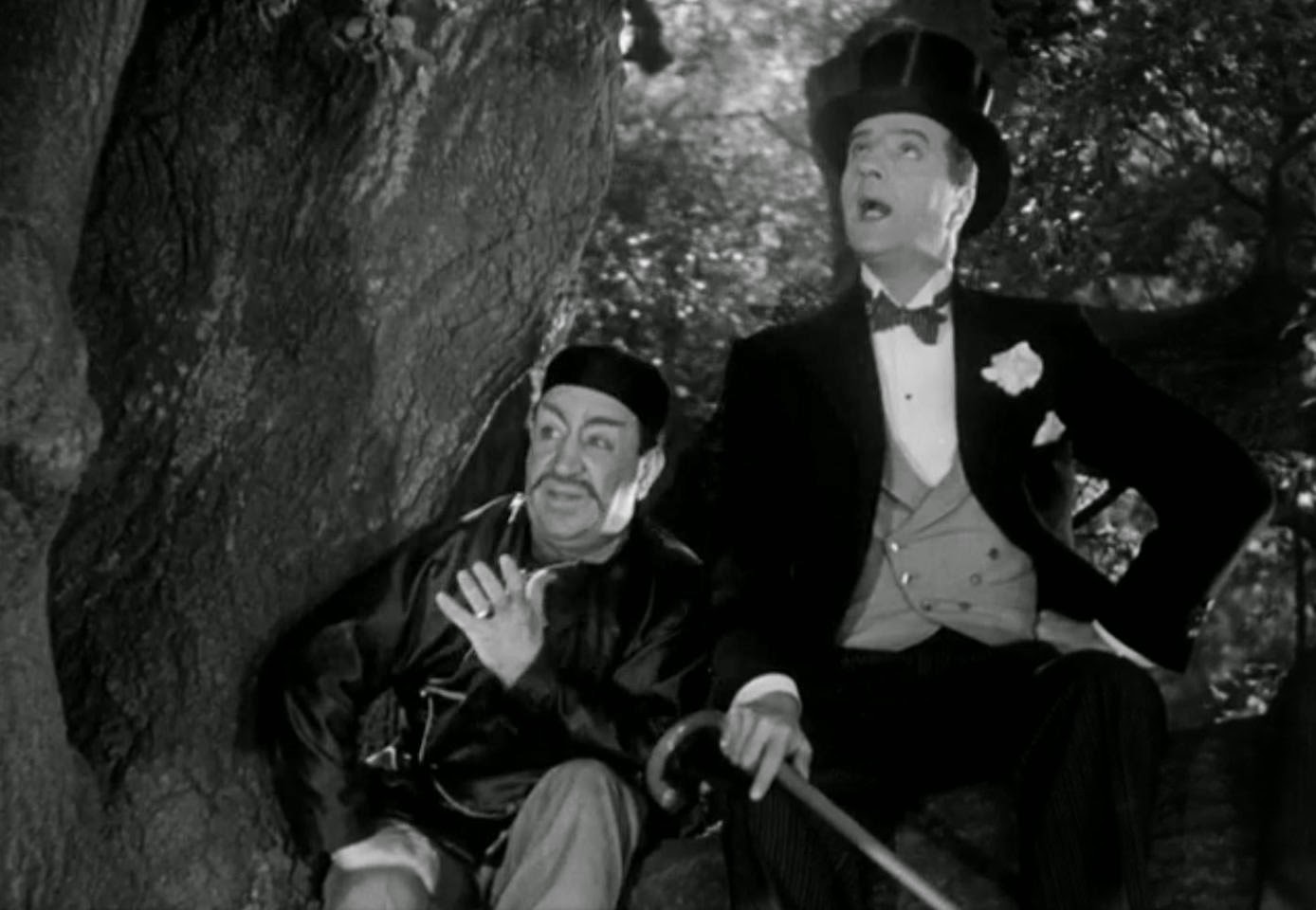 Every Wheeler and Woolsey comedy has slow spots, and even at 62 minutes, this one is no exception. The slowest scene is the opener, with way too many hoary vaudeville groaners in the barbershop. Another problem is that while likable, their characters are not as distinctive as the other comedy teams of their day. Bert and Bob are much more adept at the song and dance routines (all excellent, but 1930’s audiences liked these far better than those of the post-Depression years) than they are at the verbal jabs, many of which fall flat as there are too many unfunny lines. But, bottom line, it is fast and funny, and stands up to repeat viewings. It's atypical for the team (they usually aren't defeated in the end), but is still a good introduction to the bizarre world of Wheeler and Woolsey. 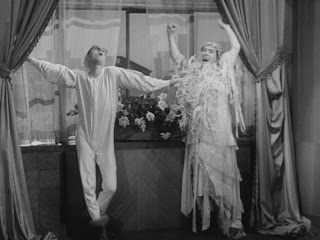 Wheeler and Woolsey are not well known to modern audiences, and lack the distinctive comic personas of Laurel/Hardy, Fields, and the Marxes.

There's a considerable amount of uncomfortably un-PC humor that hasn't aged well. That can be said about a lot of the era's films, but in this particular case, the most glaring and unfortunate example is in the climactic scene. 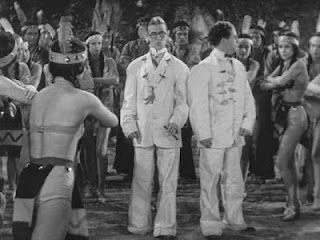 In some ways does DUCK SOUP one better; it is wilder and more surrealistic, Calhern is even funnier here (and sings!), and at times, DIPLOMANIACS is more effectively satirical. It comes in second best overall, but it is a very respectable second.

You’ll have to watch it several times to catch all the jokes. Think Zucker, Abrahams and Zucker were doing something entirely new with AIRPLANE?  Think again.  This film is right up there with SOUP, HORSE FEATHERS and MILLION DOLLAR LEGS as a prime example to show just how zany comedies could get in the pre-Code early 1930's.

Wheeler and Woolsey should be rediscovered, and they are sorely underrepresented on DVD. While Woolsey is presented as a second-tier Groucho, I think he brings to mind the late-middle age George Burns in terms of looks and delivery: he even smokes a cigar in his sleep! Wheeler brings to mind a combination of Jerry Lewis (speaking) and Zeppo Marx (singing), if you can picture that. 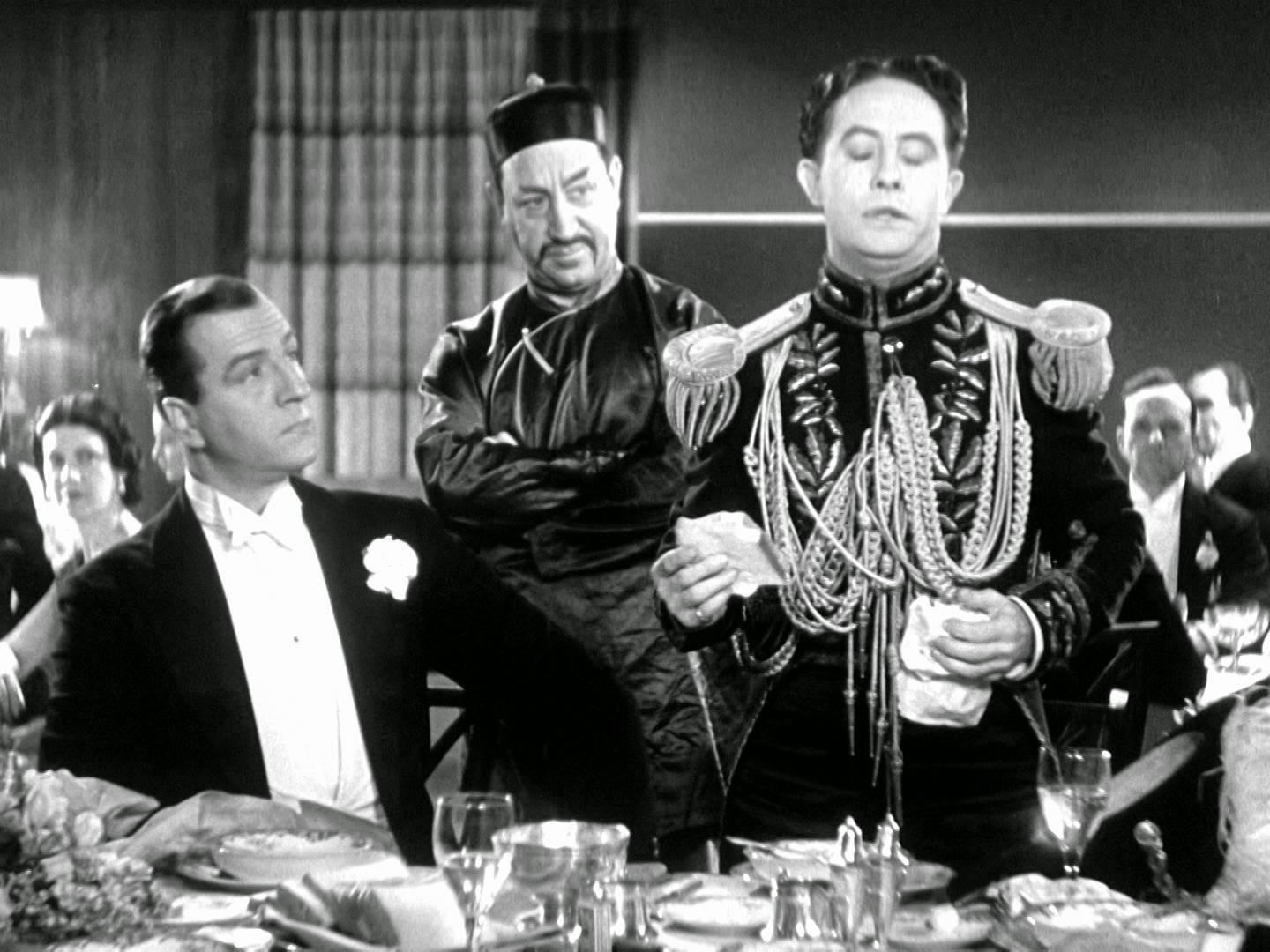 As noted above, it's barely an hour long (62 minutes) so a great double feature Wheeler and Woolsey DVD could be released, perhaps this one with (likely future review subjects here) HIPS, HIPS, HOORAY or HOLD 'EM JAIL, just to name two that are around the same running time.

It’s always fun to watch for suggestive content in a pre-Code film: in particular, watch for homosexual overtones (more overt than those in Martin and Lewis comedies, though W&W are never portrayed as anything other than straight), very scantily clad and sexually aggressive women, and plenty of wild, blunt sex references (i.e. “Where’s your cigar?” ”She swallowed it!”). 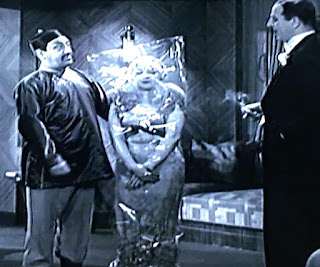 Marjorie White, who died tragically at age 30, is a scream as the aggressive vamp who chases Bert (“Sing to me!”). This is her best showcase, though she can also be seen in the Three Stooges short, MEN IN BLACK.

All things taken into account, this is a cult film just waiting to happen upon rediscovery. Isn’t there always room for a good anti-War film, particularly a bitterly funny one? This is the closest thing to a pre-Nukes DR. STRANGELOVE that exists.
Posted by Hal at 12:58 AM

I became a W & W fan in the '80s when their movies were run on TNT and AMC. "Diplomaniacs" is my favorite, and it's nice to see someone else feel the same way. I think this would go over really well with most audiences today.

I've only discovered Wheeler & Woolsey in the last coupla years, but now I've been addictively seeking out showings of their flicks. Haven't caught up with Diplomaniacs yet, but your suggestion of putting it out as a DVD double feature with Hips, Hips, Hooray! has my mouth watering . . .

Thanks for the comments!

As a headsup, two latter-day W&W films are coming up on TCM on January 2, SILLY BILLIES and THE RAINMAKERS. Neither is prime W&W both were made in 1935/36 after the Production Code came into effect, and W&W's best films are the pre-Code flicks from 1930-34. But I've never seen these two, so hopefully diluted Bert and Bob is better than none. :-)

Correction: meant to say neither is "considered" prime W&W. Maybe better than their reputation; I plan on watching to find out.

I've been a fan for around five years now - having seen W&W listed in the book 'The RKO Story' and being interested enough to seek out some of their films. I love Diplomaniacs and Cockeyed Cavaliers, but my ultimate favourite has to be Peach-O-Reno, which has Bert in drag (has to be seen to be believed LOL). Their poorest of those I've seen so far is 'Mummy's Boys', IMO.

For what it's worth the Warner Archive site has released Diplomaniacs along with other W & W movies about a week ago (Rainmakers, KY Kernels, On Again-Off Again).

Brian: I noticed this myself; in a case of great minds thinking alike I have a "Missing No More" post later this week noting it. Thanks for reading!