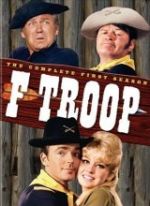 (This is the first of two parts!)

In the December 25, 1965 issue of TV GUIDE, Roger Youman utilized the writings of over 40 newspaper critics in his article “The Critics Speak” to form a consensus on the 35 series making their debut in the Fall 1965 season.  The day's writers were reserved about the season as a whole, but to modern eyes this is a very impressive list of premieres: multiple Emmy winners GET SMART! and I SPY, long-running dramatic favorites THE WILD, WILD WEST and THE F.B.I., perpetually rerun comedies GREEN ACRES, I DREAM OF JEANNIE and HOGAN’S HEROES, low-rated critical favorites THE LONER (from Rod Serling) and TRIALS OF O’BRIEN (starring a pre-COLUMBO Peter Falk) and the very popular DEAN MARTIN SHOW.

And with over 80 percent of the television critics in its corner, the most critically acclaimed new show of the 1965-66 season was: F TROOP.

“That silly show with the tower always falling over and all the politically incorrect humor and lowbrow slapstick? That was better reviewed than GET SMART and GREEN ACRES???? I don’t believe it!” 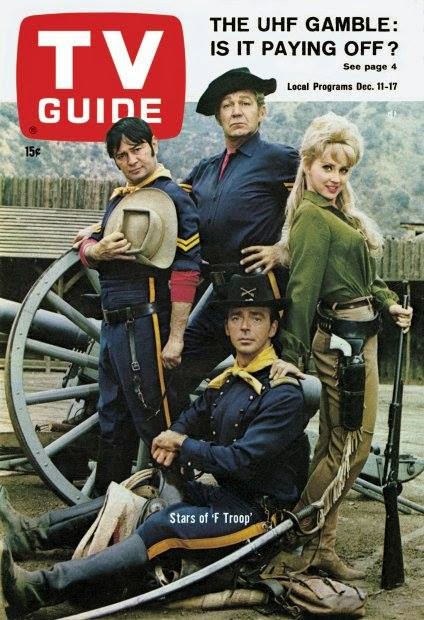 Believe it. F TROOP: THE COMPLETE FIRST SEASON shows just why the critics of the day loved it, and why the show has maintained a loyal cult following for the past 40 years. The classic first season is jam-packed with hilarious episodes and wonderfully subversive humor that flew under the radar in its time, veiled by the lowbrow physical gags and vaudeville shtick.

F TROOP begins with the accidental promotion of Private Wilton Parmenter, who is to his distinguished military family what Zeppo was to the Marx Brothers and Joe Besser was to the Three Stooges. With one lucky sneeze that sounds like “charge”, Wilton finds himself promoted to Captain, and assigned to Fort Courage in the Midwest. 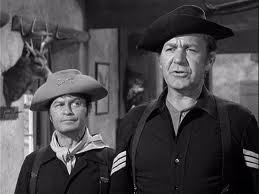 Once Parmenter arrives at his new post, he finds that reveille is played at 10 A.M. “because of the three hour time difference" and that even though rations and pay allotments are drawn for 30 men, only 17 are stationed at the fort (the other 13 are allegedly are “Indian scouts out on patrol”). Sgt. O’Rourke, the ranking NCO of the Fort, has run off two captains and a major before Parmenter's arrival. The shrewd O'Rourke immediately realizes that the new Captain is “the pigeon he’s always dreamed of”, a commander who is no threat to his O’Rourke Enterprises, which involves all sorts of dealings with the Hekawi Indians, running the local saloon, and several other illegal, even treasonous, but highly profitable ventures. He and his second-in-command, Corporal Agarn, continually keep the captain in the dark and maintain both his nominal position as commander and the façade that Parmenter is the feared Scourge of the West.

As for the rest of F TROOP, well, just like Bilko’s platoon at Fort Baxter, very few of F TROOP’s soldiers would pass a physical in real life. The bugler can’t play, the lookout has 20/900 vision in each eye, and the slightly senile Trooper Duffy regales anyone who will listen with tales of his days at the Alamo--apparently its only survivor. Fortunately, the Hekawis invented the peace pipe and only want to live in (profitable) peace and partnership with O’Rourke and Agarn. 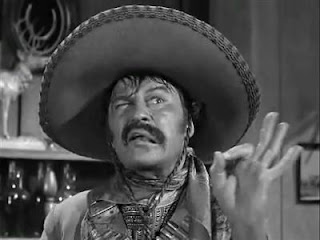 F TROOP was the best of the variations on THE PHIL SILVERS SHOW, which is pretty impressive considering that HOGAN’S HEROES and McHALE’S NAVY are among the others.

In some ways, the freshman season of F TROOP even one-upped BILKO.  Deep down, Sgt. Bilko was a softy with a heart of gold when the chips were down. But Sgt. O’Rourke was truly selfish and even treasonous at times: loaning the Hekawis the fort's cannon (and once, the entire fort itself!), inducting Sitting Bull’s son into the army to win $1,000, gambling with the F Troop pension fund (Bilko notably resisted doing this in his pilot episode) and replacing the Captain with the town drunk in order to win a bet.  O'Rourke's henchman Corporal Agarn was just as devious, but nowhere near as bright. Also, while Bilko's schemes usually failed in the end because he was a softy, O'Rourke and Agarn were often seen counting and keeping their ill-gotten gains (a brilliant twist on the formula, IMO). 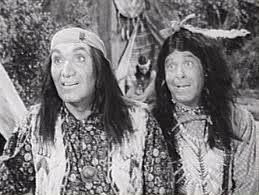 O’Rourke’s Hekawi counterpart, Chief Wild Eagle, was just as heartless (“Now, if you’d like to go for the 25 dollar attack, five Hekawi bite dust!”) and shrewd, with an equally devious second-in-command in Crazy Cat, who constantly spoke longingly about the “sad, sad day” when the Chief would go to the “Happy Hunting Ground” (and Crazy Cat would ascend to the top spot).

The selfish, “what’s in it for me” edge to much of F TROOP’s humor anticipated the more cynical era that would produce MARRIED WITH CHILDREN, SEINFELD and other sitcoms with self-serving, even heartless, yet strangely likable lead characters that were two decades away from being even the exception to the rule in 1965.

In addition to lacking Bilko’s conscience, O’Rourke, as played by Forrest Tucker, was much more physically imposing than the owlish, bespectacled Phil Silvers.  As Leslie Nielsen would over a decade later, Tucker suddenly emerged as a comedian by satirizing the western and military roles he’d been playing straight for 25 years.  The unique Larry Storch had the role of his career as Corporal Agarn. He was given ample opportunity to display his knack for dialects and mimicry, playing as many as 5 different roles in an episode ("El Diablo"). Ken Berry, with his experience as a dancer, made his pratfalls look downright graceful and had a clueless expression to rival Paul Ford's. The entire cast was strong, with Frank de Kova and Bob Steele also veterans of numerous serious western roles.


Unfortunately F TROOP would decline a bit during season two, as Parmenter became smarter, Agarn became much dumber, and O’Rourke developed Bilko’s “heart of gold”. Not that the second season was bad--just disappointing after the superb collection that preceded it, and way too conventional.  Combined with a time slot change (following a fading BATMAN), and a lack of support from its studio (Warner Brothers) it was too much to overcome and F TROOP ended its run in 1967.

But F TROOP: THE COMPLETE FIRST SEASON is very impressive and shows why critics and fans loved it. The show hits the ground running with 3 wildly funny episodes outlining the initial setup. In episodes 4 through 12, there are some growing pains as the show develops the character of Crazy Cat (and phases out medicine man Roaring Chicken) and has some too-conventional scripting, even a couple of ill-advised forays into semi-sentimentality. Fortunately, these are few and far between.

From the 13th episode on, though, F TROOP hits its stride and goes on an incredible run, hitting the ball out of the park almost every week through the end of the season.


COMING UP IN PART TWO: ALL 34 EPISODES IN MORE DETAIL, WITH FULL REVIEWS!

Another great review from The Horn Section!