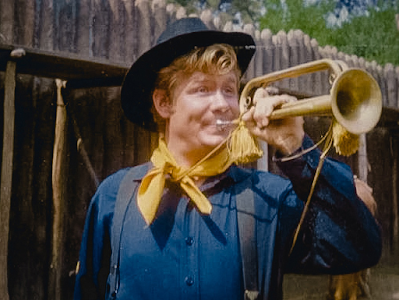 The Horn Section becomes The Bugle Section today, with the sad news that we must blow taps for Private Hannibal Shirley Dobbs.  The late great James Hampton passed away on April 7th from Parkinson's complications at his home near Fort Worth at age 84. 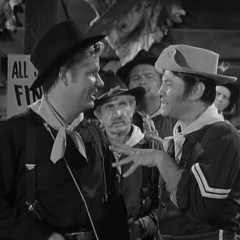 Every F TROOP passing hits hard here at the Section, but Mr. Hampton's hits a little harder than most.  Like yours truly, he was Oklahoman at birth (OKC), attended University of North Texas, and settled in that great state in the DFW area for much of the last two decades.  As a matter of fact, an acquaintance of mine fixed his air conditioning once. 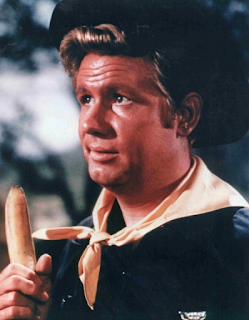 As Dobbs, James Hampton essayed arguably his most memorable character before his thirtieth birthday, memorably bickering with Larry Storch's Agarn and serving as the orderly for Ken Berry's Captain Parmenter.  This didn't keep the bugler from unwittingly getting caught up in O'Rourke Enterprises at times.  Dobbs was used as bait to draw lovely Laura Lee to Fort Courage for a saloon gig in She's Just a Build in a Girdled Cage; threw in with the schemers to homestead in The West Goes Ghost, and was the key to the new I.G.'s happiness in For Whom the Bugle Tolls.  Perhaps most memorably of all, he saved Wild Eagle and Crazy Cat from the noose in Carpetbagging, Anyone?
While Dobbs might have been rather limited on the bugle (thanks to a famously 'fat upper lip'), one of the show's subtlest running gags revealed him to be remarkably talented on other instruments: he terrific on the flute and competent on bagpipes, bass drum, ukulele and tambourine.  Given Hannibal's talent elsewhere, perhaps it wasn't out of line to hold out hope for his improvement on the horn.

Hampton's career was so much more than F TROOP, though the role of Dobbs was certainly good preparation for his first lead in a feature: Joe Camp's HAWMPS! (1976), about the introduction of camels to the U.S. Army in the 19th century.  Incidentally, Hampton joined Forrest Tucker as the only F TROOP cast members to have served in the cavalry in real life.  Hampton had another big-screen leading role in HANGAR 18, co-starring with Gary Collins.
James Hampton's best known theatrical roles came in support.  Perhaps his best known is as the tragic Caretaker in THE LONGEST YARD (1974), with longtime friend Burt Reynolds, but Harold Howard (TEEN WOLF) and Dr. Woolridge (SLING BLADE) have also endured in the minds of film fans. 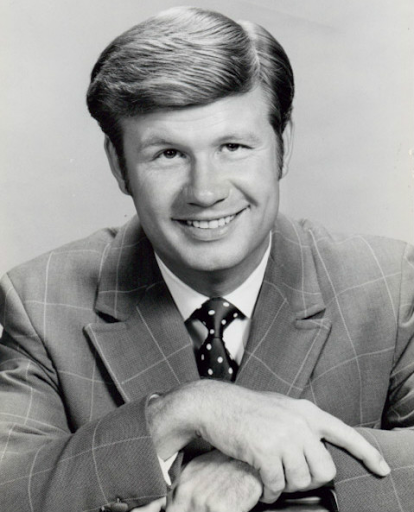 Adept at sketch comedy, Hampton was featured often on LOVE, AMERICAN STYLE and was reunited with Storch and Tucker for one of the show's segments in 1971.  Later, he supported Mary Tyler Moore alongside David Letterman and Michael Keaton in her 1978 MARY variety series.  He branched out into directing (frequently helming episodes of Reynolds' EVENING SHADE) and kept taking occasional roles into the 2010's even after retiring to DFW.
R.I.P. Mr. Hampton. For a great read, check out James Hampton's memoir, published in February: WHAT? AND GIVE UP SHOW BUSINESS?  Hampton interviewed:
Posted by Hal at 8:42 AM

Hal, let's also note that James also appeared on The Doris Day Show. I don't recall him appearing in the blackouts on Love, American Style, but I will check to verify.

LAS, by the by, helped establish Stuart Margolin, who went from blackout performer to a star after leaving the show. It helped that his brother was one of LAS' creators.

You left out one of his all-time greatest (if least-seen) moments, which I am happy to direct you to:

In 1981, James Hampton landed a co-starring role as a sitcom hubby on Maggie, with Miriam Flynn (late of Second City in Chicago) as harried housewife (Erma Bombeck created the show for ABC).

It was a half-season throwaway, but most of the episodes can be found on YouTube.

The premiere episode, titled "The School Conference", has a scene wherein Jim Hampton has to get into a car in an overcrowded garage -
- it can't be described easily; you have to see it for yourself.

As I said, it's on YouTube: Maggie (1981), "The School Conference"; the scene in question comes in about fifteen minutes into the show - and it's definitely worth the search.

... And your admiration for James Hampton will grow even greater ...

Oh, man. He was wonderful. (this is John Wilder)

hobbyfan, Mike, John, thanks for reading!

I haven't watched LAS in quite a while so I may have do research and revise, but he was a go-to actor for that anthology during its run at the very least.

Mike: I will check MAGGIE out, thanks for the tip.

And John, love your site. I'm a long time reader.

I remember first seeing Mr. Hampton and knowing who he was (from the credits) in a 1977 Saturday morning serialized tv show on NBC called THE RED HAND GANG. In a 5-part episode, he, Anthony Zerbe, and Maureen Arthur (a good trio of classic tv actors) played kidnappers who kept their victim on a boat. It was up to the Red Hand Gang to rescue him.

I've seen him on LAS at least once. From what I read, he was part of the ensemble (along w/ Stuart Margolin & many others) who acted in the short "blackouts" between stories during the period 1971-74.