100 YEARS OF TUCK: His Television Best

February 12, 1919, one hundred years ago today.  An historic day that saw the birth of acting's G.O.A.T.   That's right: today is the Centennial for The Horn Section's patron saint, Forrest Tucker.


In the thirteen years I've been writing here, we've explored much of the man's work.  Some of the greatest of his 99 feature films were covered here when we saluted him on the twentieth anniversary of his untimely passing.   In the years since, we've been pleased to see several of big screen sleepers released on DVD and BluRay.  Particularly so to see BARQUERO and THE QUIET GUN readily available for all to see after decades of obscurity.


Tuck had a fine run in the decade following his SANDS OF IWO JIMA breakthrough, starring in classics ranging from THE ABOMINABLE SNOWMAN to AUNTIE MAME.  After the latter, he became quite familiar to theatre patrons nationwide, playing Professor Harold Hill in THE MUSIC MAN some 2,038 times from 1958-1963.  When that highly successful run ended, Tuck hosted an instantly popular morning drive time show on WCFL-AM in Chicago beginning in November 1964.

And you thought Howard Stern was the King of All Media.

Tuck's newfound radio career had to be set aside six months into his run when television came calling with what would turn out to be his signature role:  Sergeant Morgan O'Rourke in the enduringly popular F TROOP.  Such was the show's impact that it has overshadowed not just a quarter century of memorable performances on stage and screen, but also the remainder of Tuck's TV resume, which he'd already been busily compiling for over a decade when F TROOP premiered in September 1965. 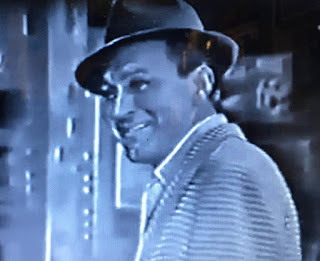 You're obviously enjoying the F TROOP Fridays installments here at the Section, so I won't dwell on Tuck's most famous contribution to the boob tube today.  In celebrating his Centennial, I'd like to give Tuck the same tribute we paid his frequent co-star Larry Storch last month and highlight just some of his finest moments on the small screen away from the friendly confines of Fort Courage.  A dozen to be exact, plus bonus YouTube links at the end:

Five years after playing Wild Bill Hickok opposite Charlton Heston's Buffalo Bill Cody in PONY EXPRESS, Tuck essays the Codyesque Rex Montana in this drama concerning a Wild West show.  The hero is a womanizer offstage and, as it turns out, living a lie on it.  He's a capable rider and shooter, but one with a past that catches up with him as this Story unfolds.  The first of many television western appearances for future Golden Boot Winner Tucker (he was one of the inaugural class, in 1983).  A tour de force near the end of this classic's freshman season. 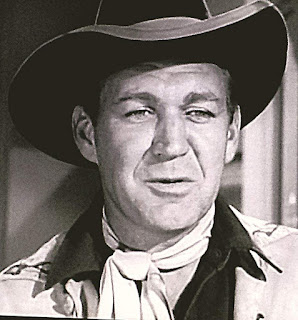 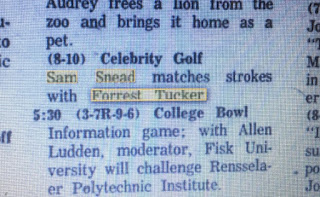 Forrest Tucker's prowess on the links could be the subject of its own post.  Hell, maybe it will be sometime.  Fortunately, we have this episode as an artifact of his avocation, in which Tuck battles golfing legend Slammin' Sammy Snead.  How good was Tuck at his hobby?  Snead was on a ten match winning streak against celebrity opponents with intent to make Forrest his eleventh victim.  How did it go?  Mike Connolly had the scoop three months before the episode aired: 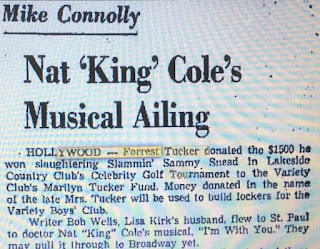 That'll learn him to mess with The Sarge.

Forrest Tucker, Larry Storch and Ken Berry appeared with host Janet Leigh on ABC's venerable variety series.  Of course, the stars of the network's hottest new show were on for sweeps month.  Ken's dancing was highlighted, Larry did some standup, and Tuck paid tribute to Jimmy Durante and demonstrated some of the singing and dancing talents that had largely been limited to his stage work.

HONDO: Hondo and the Judas (November 3, 1967) as William Clarke Quantrill

"Man can live with one wing, but not with gangrene."

Tuck is the top billed guest star in what might be the best-known episode of the longtime TNT Saturday morning cult favorite (currently being rediscovered on GetTV where it has aired on Sundays since 2015).  While I don't consider this to be one of the stronger installments, Tucker's performance as the Civil War guerilla leader is a bold one, worthy of the larger audience it has attained in reruns.  This dubious Colonel is no one-dimensional villain.  Manipulative yet charming one moment, exploding with rage at his handicap the next, then bravely taking on three gunmen with only one arm to protect a longtime friend just when you think you've figured him out.  Tucker's Quantrill inspires obedience and loyalty from the James brothers, the Younger brothers, the Fords and one Hondo Lane despite some serious fissures in his personality which have intensified since the war. 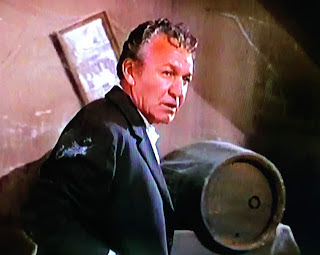 Tuck was a particular favorite on the longest-running western on U.S. network television, making a half-dozen segments between 1965 and 1972.  His most impactful character arrived in the first GUNSMOKE of the Seventies: Sergeant Emmett Holly, a whiskey-soaked racist in hot pursuit of an escaped Native to protect his "perfect record" days before his retirement.  And, eventually, also in hot pursuit of Miss Kitty, perhaps even more intensely.  Holly even returned to woo her in an ill-conceived, farcical sequel a season later.  Some say The War Priest reminds you of his most famous role, which IMO is completely false outside of the uniform he's wearing.  Myself, I wonder if they've actually watched this one, or if they confused it with Holly's second installment.  Tuck carries this one, with James Arness mostly absent (a frequent occurrence during the show's anthology-like final years). 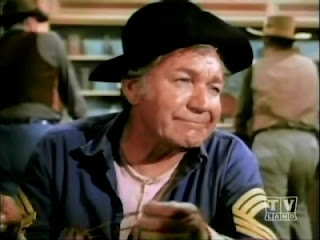 "You see, I give them a little peek over the pigsty, a view of heaven."

Another old west con man, this one far less fun than Fort Courage's Sergeant.  Dr. Stringfellow peddles the titular serum from town to town, and while there are hints of a conscience buried underneath the bluster, something clearly died in this man a long time ago.  It's a tribute to Tuck's skill that he is able to instill a man who has no redeeming qualities (this fraud sells false hope to a dying six year old girl) with a hint of humanity here and there.  Forrest Tucker's only journey into Rod Serling-land, which is a shame. 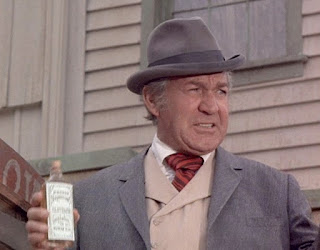 In contrast to his ubiquity on GUNSMOKE, it is truly a surprise that one of the busiest actors in the genre made only one appearance on the second longest running television Western of all time, and not until the show's next-to-last season!  Fortunately, Forrest's lone BONANZA gave him a meaty character to essay, a retired cavalry officer who is not all that he seems to be.  His facade is threatened by the arrival of Chief Dan George, who claims the titular headdress was stolen from him.  A romance with Linda Cristal (HIGH CHAPARRAL) is an added bonus.  Tucker later made another memorable appearance with Michael Landon on LITTLE HOUSE ON THE PRAIRIE in 1975. 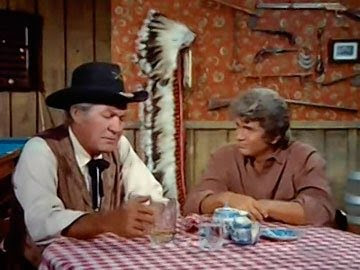 Excellent Made-for-TV movie deserves a standalone review, and will get one now that I've had a chance to revisit it.  Martin Landau is a Vietnam POW convalescing in a VA hospital looking for his Vermont hometown--which no one has ever heard of and appears to no longer exist.  Forrest gets to show his avuncular side as a wheelchair bound WWII vet who meets Landau at the hospital and sympathizes with his plight.  Fine acting from all involved, including Jane Alexander, Martin Sheen and Brock Peters.  One hell of a final scene for the venerable star too. 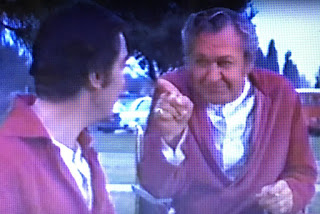 If you could steal an episode of KOJAK from Telly Savalas, you were doing something right.  Tucker played plenty of aging professionals facing mortality literally or figuratively in prime time during the Seventies, and this is one of his strongest.  Nearing retirement, Forrest is a Detective longing to recapture his glory days.  Fifteen years after he received a ton of recognition for cracking a high-profile case, Tuck's thirst for the limelight has led him to alienate wife Verna Bloom personally and Captain MacNeil professionally.  The latter wants Tuck's badge.  For good reason it turns out, since Tuck is willing to break the rules in a big way to go out a winner.  Nuanced performance, both at home and the office.  But once again, Tuck went sadly unnoticed by the Emmys. 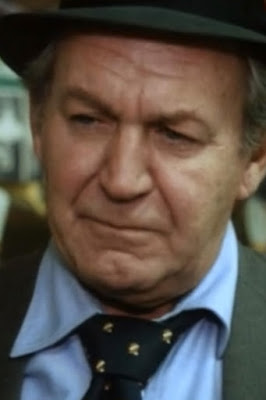 Tucker proved such a popular guest star that many of his characters were invited back:  Sergeant Emmett Holly on GUNSMOKE and Joe Snag on DANIEL BOONE were two examples.   Tucker had this opportunity again after his introduction as Flo's wealthy, estranged father on ALICE. 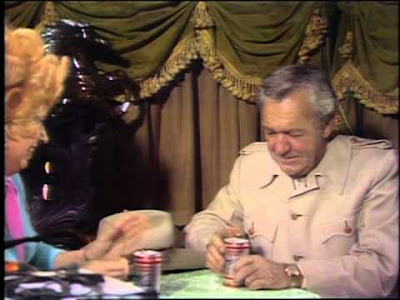 After Florence Jean Castleberry was spun off into her own series, Forrest got a second go-round in a special one hour episode (shown in two parts in syndication and streaming), in which the blustery yet sympathetic absentee father tried to make amends with the rest of the family members he's hurt one year after reconnecting with his daughter.  Practically tailor-made to Tucker's flamboyant, extroverted personality: a good showcase for both Tuck and series star Polly Holliday.  FLO was recently released on DVD by Warner Archive and remains an entertaining series throughout its too-short 29 episode run. 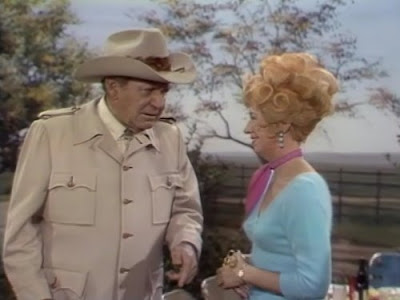 Forrest Tucker's swan song was released posthumously, in this overlooked but entertaining time travel tale starring William Devane, Lauren Hutton and Klaus Kinski.  It's appropriate that Tuck ended his forty-six year career on the tube and that his character is closely connected to the old West. As "Texas" John Cody, an expert on the subject, Tuck provides some key information for Devane and also finds time to flirt with Hutton.  Hell, who wouldn't? 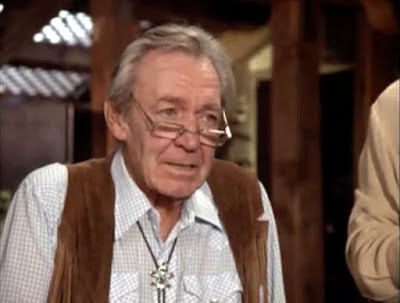 Happy Birthday, Tuck, and R.I.P.  You can find many of Forrest Tucker's television AND film performances on YouTube, such as this 1957 episode of FORD TELEVISION THEATRE:

What does GOAT mean in this context, if I may ask?

I also recall Mr. Tucker playing the murder victim in the 7th & final COLUMBO of its 1st season. Peter Falk himself directed "Blueprint for Murder", where Patrick O'Neal played an architect who murders a TX millionaire & hides the body so he can keep his big project going.

Greatest
Of
All
Time

of course he is, he's the Patron Saint around here! :)

Liked his COLUMBO, I just wish he'd had the opportunity to play the killer sometime. The only problem I had with Blueprint for Murder is how meekly he surrendered to O'Neal; sure didn't seem in keeping with the forceful character he'd established in his opening scene.